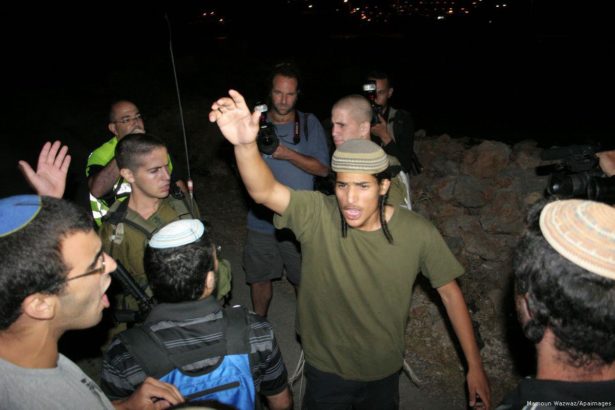 Israeli settler violence – with IDF complicity – is becoming more and more commonplace, even targeting elementary schools. The government has also approved extensive Israeli settlement expansions and Jewish-only roads to be built on Palestinian land, which will result in isolation of Palestinian communities and loss of olive trees.

In addition, Jerusalem has seen an increase in extremist Jewish visits to the Al-Aqsa mosque.

by Madeeha Araj, The National Bureau for Defending Land and Resisting Settlements

In a clear violation of all laws and human rights principles, including the right to education and access to educational institutions, many Palestinian schools in the countryside and Bedouin communities were attacked by Israeli soldiers and settlers.

The Oref and Luban Sharqeia schools south of Nablus were attacked. 7 students were injured during the attack.

There were also shooting attacks by settlers and the Israeli occupation forces in the yard of Al-Tahadi 5 Elementary School in the village of Beit Ta’mir, east of Bethlehem, and the Tahadi 10 School in the Ibzik area in the occupied Northern Valleys. A number of caravans used as classrooms were destroyed.

The Israeli occupation forces handed down notices to demolish the Dabba Elementary school in Mafasser Yatta, south of Hebron, and to expel its teachers and students. They also hindered access to a school on Ramallah’s main Nablus Street.

Within the context, the racist “Rajavim Institution” filed a case in an Israeli court to demolish the Tahadi school in the area of ​​Beit Ta’mir, east of Bethlehem, which has been subjected to demolition since it was demolished on the first day of the scholastic year of 2016-2017. This racist institution is responsible for monitoring Palestinian homes in Area C, and it is always directing the Israeli Civil Administration to demolish houses and stop construction there.

At the same time, the Israeli occupation government escalated the open war against the Palestinian people. The Jerusalem District Planning and Building Committee approved the construction of 640 new settlement units in the Ramat Shlomo settlement on Palestinian land in Shufat. It is located between Ramat Shlomo and Beit Hanina in Jerusalem.

Some of these lands were expropriated from the Palestinians under the pretext of using them as public areas.

The construction of those new settlement units will lead to the encirclement of the Palestinian neighborhoods adjacent to the settlement and their isolation from any natural demographic expansion or growth.

During a closed discussion and without prior announcement, the committee responded to the Silwan “alternative project” As an alternative structural plan for the municipality of the occupation after an objection by the Alad settlement association. Alad oversees the so-called King’s Garden, and rejected the request to reveal the level of excavations under the town of Silwan – Wadi Hilweh and Al-Ain area, and considered that as out of its jurisdiction.

The committee also approved the linking of the settlement of Ramat Shlomo with bypass road 443 Modi’in – Tel Aviv, Jerusalem, on Route 21, which runs through the village of Shu’fat and isolates it from the thousands of dunums between St. 21 and 443 on the Jerusalem – Tel Aviv road.

There was also a decision to seize 2 dunum from Khallet al-Shamiya, 141 dunums from the village of Al Asfoura and 12 dunums from Masodiya area, with the aim of constructing the aforementioned bypass road to the settlement of Beit Aryeh.

In the Jordan Valley, the Israeli occupation forces seized 356 dunums of land near the village of Makhoul in the northern Jordan Valley, where one of the shepherds found the notification when he had his livestock in the area. Hr poinyrf out that the occupation placed the notification days ago at an electric columns feeding the army camps. The lands are located in four numbered basins 223, 224, 221 and 226.

The Israeli occupation forces have also put a number of notices at the olive farms that stated the uprooting trees within 45 days.

Part of the occupation policy is aimed at providing personal security to the religious settler groups, who have been recently roaming the Old City, especially the roads leading to the Al-Aqsa Mosque. Moreover, the Israeli authorities have begun to expand the monitoring network around Al-Aqsa Mosque and the surrounding areas.

The agreement includes the planting of more than 500 smart monitoring cameras in a project called the “Kikra 2000.” Meanwhile the Israeli police allowed a number of Knesset members to visit the Al-Aqsa Mosque. Police in Jerusalem, Major General Yoram Halevy, have quoted as saying: “If the situation continues the same in Al-Aqsa, restrictions on visits by members of the Knesset will be removed”.

In an attempt to legitimize the daily incursions of settlers by the Israeli government’s into the Al-Aqsa Mosque, PM Netanyahu allows Israeli right-wing members to break into the Aqsa once a month instead of one per 3 months. Thus Netanyahu allowed MK Shuli Maallem Raafaili of the far-right Jewish party to storm the Al-Aqsa Mosque, which the Israeli-Yemeni parties call it the Temple Mount.

This decision reflects the adoption of the recommendation of the Jerusalem District Commander, Yoram Halevy, to allow Knesset members to visit the area without any restrictions. For his part, Shuli Maalem, a member of the Israeli Knesset led a provocative incursion into the Al-Aqsa Mosque, and toured it. It is said that a similar storm led by the extremist rabbi, MK, Yehuda Glick of the blessed mosque and carried out tours throughout the mosque.

The National Bureau said that “the continued violation of the sanctity of the Al-Aqsa Mosque requires the intervention of the international community to pressure the occupation authorities to stop such acts and to abide by the provisions of international humanitarian law.”

Playground or battleground? 2 stories in 1 weekend