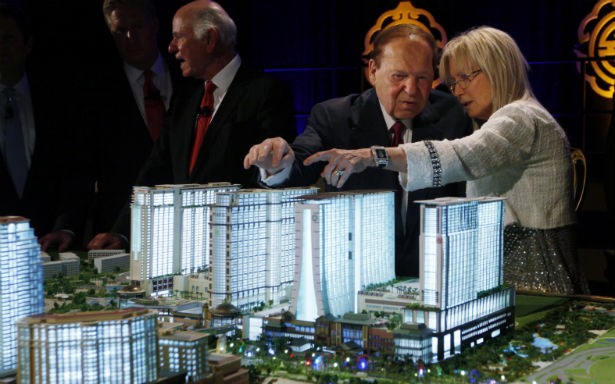 Bloomberg news reports that while other major Las Vegas casinos have closed to protect employees and the public from the coronavirus pandemic, Sheldon Adelson is keeping his casinos open.

[UPDATE: Adelson finally closed his casinos on March 19th, after the governor ordered casinos to close.]

According to Casino.org: “From the Strip to New England to the Midwest to California, commercial and tribal operators announced over the weekend they’d either voluntarily close casinos or do so to comply with state government orders barring large gatherings.”

On Monday President Trump called for Americans to avoid gatherings of more than 10 people, and the Nevada governor ordered schools and state offices to close.

Unlike governors elsewhere, the order did not include casinos, a powerful force in Nevada. However, the governor asked local governments to enforce a new Centers for Disease Control and Prevention guideline that all events with attendance above 50 be canceled or postponed.

Adelson is known for using his casino profits to obtain US policies beneficial for Israel by donating to American candidates for office. Adelson’s net worth is in the range of $37 billion.

The Adelsons are credited with Trump’s decision to move the US Embassy to Jerusalem (after both Republican and Democratic  presidents had long kept it in Tel Aviv), Trump’s decision to withdraw from the Iran nuclear deal, and the recent Trump-Kushner “peace plan.”

Adelson is a fervent advocate for Israel despite its long record of human rights violations and violations of U.S. laws, documented by Human Rights Watch, the Red Cross, Foreign Service Journal, and others.

He once infamously announced that he regretted serving in the U.S. army rather than the Israeli military.

Similarly, Miriam Adelson has said that her heart has always remained in Israel, but she got “stuck” in America after meeting Adelson.

In 2018 Trump bestowed the Presidential Medal of Freedom on the couple for their “philanthropic work.”

While the Adelsons have donated to medical research and programs addressing drug addition (but apparently not gambling addiction, disastrous for many Americans), it appears that the bulk of their philanthropy involves Israel. Inside Philanthropy reports:

“The Adelson Family Foundation, one of Adelson’s philanthropic vehicles, is concerned with Jewish causes around the world. Adelson takes a decidedly pro-Israel stance, which is reflected in his and his wife Miriam’s philanthropy. The foundation supports charitable organizations located primarily in Israel and the United States, with funds going to Israel Advocacy and Defense, Israel Studies, Holocaust and Anti-Semitism Awareness, among others.

“Birthright Israel is a major grantee. The couple via their foundation have given tens of millions to the organization. Another youth outfit that the Adelsons have funded is B’nai B’rith Youth Organization. The Adelsons founded the Dr. Miriam and Sheldon G. Adelson Educational Campus in Las Vegas, “the only school in Nevada built on the Jewish ethos of community, service, innovation and discourse.” The school offers classes for students aged 18 months through 12th grade. Other education grantees include a mix of Israel and U.S. outfits, including American Friends of Ariel University, which supports Ariel University in Israel, and Rashi School in the Boston Area. Adelson funds a number of agencies that aim to shift policy and attitudes around Israel and the Jewish people, including Christians United for Israel, “an American pro-Israel Christian organization that defines itself as “a national grassroots movement focused on the support of Israel.” Sheldon and Miriam have also given millions to SpaceIL, an Israeli nonprofit founded by three young engineers at the end of 2010, answering the Google Lunar XPRIZE challenge.”

Trump had been scheduled to attend a fundraiser at the Adelsons’ Las Vegas mansion on Thursday, but called this off due to the pandemic. He had also been planning to address the Republican Jewish Coalition’s annual leadership meeting at Adelsons’ Sands’ Venetian casino resort.

Scheduled for Adelson’s Venetian and Palazzo resorts, the three-day meeting was expected to include numerous conservative politicians and leaders. Tickets began at $1,000 and were only available for current members of the RJC National Leadership. Adelson is on the RJC board.

The RJC announces that it “stands with Israel.” While the RJC states, “Hamas has sent hundreds of missiles from Gaza against Israeli civilians in recent days,” it fails to report that these mostly homemade rockets came after massive Israeli violence. Rockets from Gaza have killed about 29 Israelis in total, while Israeli airstrikes have killed over 3,500 Gazans.

If you found this information valuable, please donate so that we can continue our work.