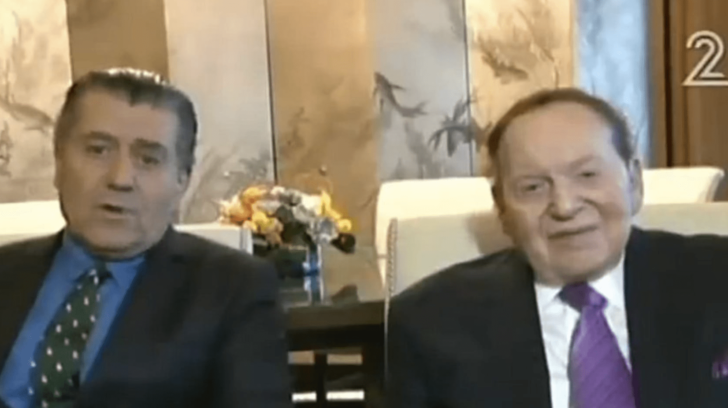 Screenshot of the Channel 2 interview with Haim Saban (L) and Sheldon Adelson.

In 2015, billionaire Sheldon Adelson hosted a summit to battle the nonviolent boycott movement for Palestinian rights (BDS). All participants in the event pledged at least $1 million to cover the costs of “demonizing the demonizers…” Participants, true to the maxim that what happens in Vegas stays in Vegas, declined to discuss any financial pledges….

by The Forward and Nathan Guttman, reposted from Ha’aretz

Although checks have yet to be written, deep-pocketed donors like summit organizer Sheldon Adelson and Haim Saban pledged tens of millions to their cause. [Note: Three months after this piece came out, Saban quit the organization.]

“You work together and we will raise you the money,” promised Israeli-American businessman Adam Milstein following the conference for Israel activists that took place there over the weekend. “You no longer have to worry about financing and fundraising. You just need to be united.”

Milstein, a California real estate developer, who was among the key organizers of the first Campus Maccabees Summit, as the gathering dubbed itself, made his comments to Boaz Bismuth of Israel Hayom, an Israeli daily owned by casino mogul Sheldon Adelson, the host of the closed-doors Vegas summit, which took place at Adelson’s own Venetian hotel. Israel Hayom was the only media outlet granted access to the meeting, which was otherwise closed to press coverage.

Participants, true to the maxim that what happens in Vegas stays in Vegas, declined to discuss any financial pledges made during the summit in Sin City. But based on the organizers’ own guidelines, it is clear that tens of millions of dollars were raised to combat campus campaigns to boycott, divest from and sanction Israel — or BDS, as the movement is known.

Adelson and his fellow conference organizers limited participation in the event to donors willing to pledge at least $1 million over the next two years. With some 20 donors taking part at the meeting, the total dollar amount raised is estimated to be at least $20 million. A Jewish communal leader who did not attend the meeting but who spoke to the organizers said that, in fact, the overall funding goal for Adelson’s Campus Maccabees was $50 million.

The two-day gathering brought together 50 Jewish organizations representing mostly right wing and hawkish views with some mainstream campus organizations taking part as well. Many of the groups prepared presentations to donors. After taking into consideration the pitch and additional information included in a book of programs given to participants, these funders will decide who gets funding and at what level.

Presentations varied in form and topic, but all included suggestions for taking on anti-Israel expressions on campus.

“My recommendation is that all groups work together to demonize the demonizers,” Morton Klein, national president of the Zionist Organization of America, told the Forward before his presentation in Vegas. This, according to Klein, means “demonizing the racists by telling the truth about the Palestinian Authority and giving examples of what it does as a racist terror organization.”

Military leaders in Israel, which has accepted the P.A. as its negotiating partner in the now aborted peace process, have testified in the Knesset that the group’s security forces have actually helped Israel crack down on terrorism in the occupied West Bank. But Israeli officials vehemently protest the P.A.’s decision to form a unity government with Hamas, the militant Palestinian group that rules Gaza and refuses to recognize Israel as a legitimate state. The United States and Israel consider Hamas to be a terrorist organization.

Adelson and Saban, the two billionaires steering the Campus Maccabees effort, did not publicly commit themselves to any specific idea. But both stressed their view that BDS — a form of nonviolent protest promoted by a diverse array of groups opposed to Israel’s policies toward the Palestinians — as simply a form of anti-Semitism.

“As a teenager, I suffered from anti-Semitism. A lot,” Adelson told Israel’s Channel 2 TV in an interview he and Saban gave the station. Adelson noted that today there is “little to no sign in American society” of significant anti-Semitism but added he was “absolutely positive that there is a lot of anti-Semitism on campus.” Saban, warned of “an anti-Semitic tsunami that’s coming at us.”

Both men stressed that their overarching goal was to get all pro-Israel actors on campus to work together against this phenomenon, as they understood it, on American campuses.

“It’s a challenge to get Jewish groups to work together,” Adelson said in his remarks to Channel 2 TV. “Going back in history, the arguments and debates between Jews brought down the Temple.” The purpose of his gathering, he stressed, was to unite forces and “put boots on the ground” on college campuses.

Adelson described three components of his Campus Maccabees concept: donors who will fund the operation; activists on the ground willing to take the fight to the campus; and researchers who will supply information about the anti-Israel groups and recommend possible legal avenues to block their activities.

The researchers will also provide input on messaging that can help win over hearts and minds, he told Israel Hayom. It is an American based effort, though a communal official informed about Adelson and Saban’s intentions said they see a role for Israel in the research component. The pro-Palestinian groups the organizers identified as causing Israel the most damage were Students for Justice in Palestine and the Muslim Student Association, which Adelson described as “BDS and Co.”

Despite the theme of communal unity the organizers touted, many of the Jewish community’s key players were not invited or chose not to attend. The conference also eschewed any mention of Israel’s policies towards Palestinians in the occupied territories, and the way these policies are used to recruit supporters to the BDS camp.

This is a mistaken approach, argued Kenneth Bob, national president of Ameinu, a liberal Zionist organization that runs an anti-BDS campus program. Ameinu, which was not invited to the Las Vegas conference, aims to convince progressives not to join the boycott drives. There is a need, Bob argued, to “speak to liberals in a language they understand.” This involves admitting Israel faces challenges and acknowledging the problems created by its occupation of the West Bank. Otherwise, he warned, BDS will continue to try and “make itself the social justice cause of our times.”

Ameinu’s campus program, the Third Narrative, has gotten very little communal funding so far. “The Jewish community at large has not adopted our approach,” Bob said.

Adelson and Saban made clear they want to see the impact of their campaign noticed on campus as early as this fall, when students return to college. This would require funding being determined and provided in the upcoming weeks.

Daniella Greenbaum, director of engagement for Aryeh, a pro-Israel student organization at Columbia University, heard about the Vegas donor meeting, but had her own take on what is needed for helping activists like herself fight anti-Israel sentiments on campus. “To talk about ‘fighting anti-Israel college activism’ is to fuel the fire,” she said. This battle, Greenbaum said, means entering “into a never ending game of whack-a-mole — a game that is as unproductive as it is exhausting.” The focus, she believes, should be on strengthening U.S.-Israel relations and educating students on this issue.

Match made in heaven

In their joint TV interview, Adelson, a Republican party mega-donor, and Saban, a major supporter of Democratic presidential candidate Hillary Clinton, seemed to marvel at the idea of their partnership for Israel, a collaboration that began several years ago when both helped fund the Israeli American Council, an organization of Israeli expatriates living in America.

“When it comes to Israel we’re absolutely on the same page. Our interest is to take care of Israel’s interest in the United States. Period. Over and out,” Saban declared during the Channel 2 interview.

When the interview ended, Adelson announced it was time for dinner.

“I support that 100%,” Saban replied, and the two men smiled to the camera and high fived.

Nathan Guttman, staff writer, was the Forward’s Washington bureau chief. He joined the staff in 2006 after serving for five years as Washington correspondent for the Israeli dailies Haaretz and The Jerusalem Post. In Israel, he was the features editor for Ha’aretz and chief editor of Channel 1 TV evening news. He was born in Canada and grew up in Israel. He is a graduate of the Hebrew University of Jerusalem.

The Pro-Israel Push to Purge US Campus Critics