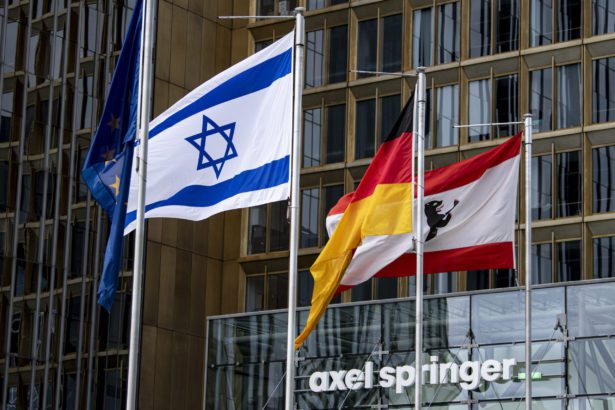 Israel has another devotee: the new owner of Politico, Axel Springer. (Pictured:16 May 2021, Berlin: The Israeli flag flies in front of the Axel Springer building. In addition, the (l-r) European, German and Berlin flags can be seen.)

German publishing house Axel Springer, which recently acquired Politico magazine and Business Insider, requires from “every employee of our company” a commitment to Israel’s ‘right to exist’ (i.e. Israel’s alleged right to ethnically cleanse the land).

Axel Springer said in August it was buying Politico for more than $1 billion.

The chief executive of the Berlin-based company, Mathias Döpfner, has long said that support for Israel is “a German duty.”

He told The Journal on Friday that this sentiment – and others such as support for a united Europe and a free-market economy – “are like a constitution, they apply to every employee of our company.” Employees who disagreed “should not work for Axel Springer, very clearly.”

Politico staffers, however, will not be required to sign a written commitment to these principles, as employees in Germany must, Döpfner said.

He said he expected Politico, which was launched in 2007, and Axel Springer to shun activist journalism, which he said was helping polarize the United States and other countries.

Axel Springer is “step by step developing the U.S. into our most important market and engine of growth for digital publishing,” Döpfner told The Journal.

In Germany, Axel Springer owns titles including tabloid Bild and the center-right broadsheet Die Welt. It has recently expanded greatly in the United States, buying Business Insider for about $500 million and the business-based Morning Brew.

“There will be no restructuring, no synergies, no mergers and no cost-cutting,” he told The Journal.

Döpfner said his company had hired over 1,600 people during the worst of the coronavirus pandemic, an approach that would be applied to Politico and the other U.S. titles.