You Are Here: Home → Israel tried to sink a US Navy ship, Media covered it up

Israel tried to sink a US Navy ship, Media covered it up

Israeli forces attacked the USS Liberty, killing 34 American servicemen and injuring at least 174. This is one of the most decorated crews in US history, yet the media have buried and misrepresented the attack, and the crew is still awaiting justice. (Documentaries below)

On this day 53 years ago, Israeli forces tried to sink a US Navy ship, the USS Liberty. The prolonged Israeli attack killed 34 men and injured at least 174. The Moorer Commission declared: “…in attacking the USS Liberty, Israel committed acts of murder against American servicemen and an act of war against the United States.”

US media have covered it up ever since.

Today, Israel partisans are promoting legislation that will require American taxpayers to give Israel a $38 billion package (over $10 million per day for 10 years).

For detailed information on Israel’s attack on the Liberty go here.

For brochures, posters, and other materials about the Liberty to distribute in your area, go here.

Various groups used to put up billboards about the attack, but then Israel partisans bullied the billboard companies and they would no longer permit them. 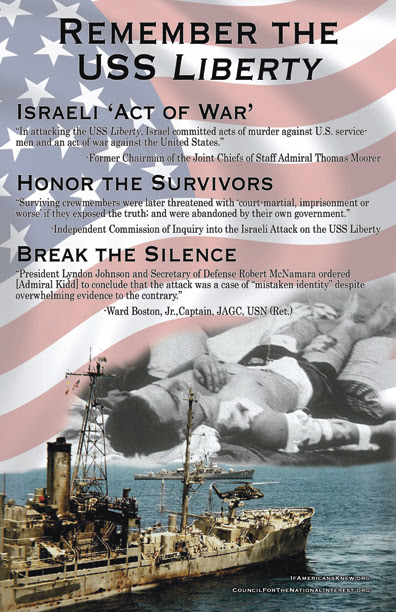 A short video explaining the history of Israel-Palestine that mentions the USS Liberty:

Against Our Better Judgment: The hidden history of how the U.S. was used to create Israel