You Are Here: Home → Amazon and Google: partners in Israeli apartheid 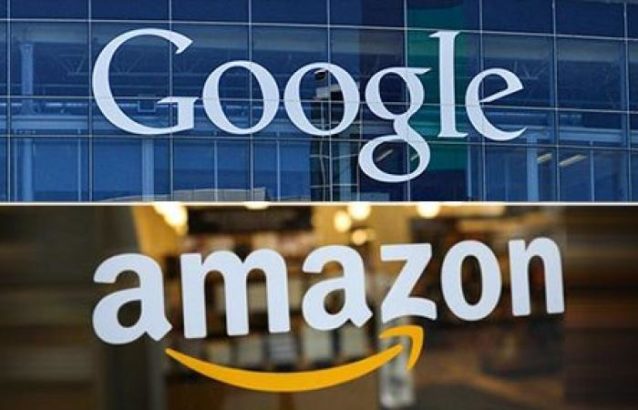 Amazon and Google claim a commitment to humane practices, but whistleblowers have called out both tech giants for aiding and abetting the oppression of Palestinians.

Amazon isn’t just your one-stop shop for household items; Google is more than an internet search engine. These corporations are supplying Israel with the technology to enforce and deepen its occupation and apartheid over Palestinians. Israel has a long, documented record of violating human rights and international law.

But while Israel risks becoming a pariah among some cultural producers, it is being aggressively embraced by globe-spanning corporations like Amazon and Google – among the wealthiest companies in history.

The two tech giants are not just lining up to do business with Israel. They are actively working to build and improve the technological infrastructure Israel needs to surveil Palestinians and confine them to the ghettos Israel’s army has created for them.

Through their collaboration on Israel’s Project Nimbus, both companies are helping to remove any pressure on Israel to make peace with the Palestinians and are instead becoming partners in Israeli apartheid.

Now workers for both companies are speaking out – most of them anonymously for fear of what they call “retaliation.”

This month some 400 employees of the two companies published a letter in The Guardian newspaper warning that Amazon and Google were contracted to supply “dangerous technology” to the Israeli military and government that would make Israel’s rule over Palestinians “even crueler and deadlier.”

The $1.2 billion contract for Project Nimbus awarded earlier this year means the two tech firms are to build data centers in Israel on behalf of the Israeli military and government.

Senior staff will need Israeli security clearance to work on the project.

In a sign of how aware Israel is of the potential backlash against Amazon and Google’s involvement, the contract bars the tech corporations from withdrawing due to pressure from either employees or the growing boycott, divestment and sanctions (BDS) movement. The terms of the contracts are also being kept under wraps to prevent scrutiny.

The tech giants’ wish to avoid publicity is understandable. Each pays lip service to ethical business practices. Google claims that firms “can make money without doing evil,” while Amazon’s “leadership principles” state a commitment to “make better, do better and be better.”

Providing Israel with the technological tools to better enforce both its belligerent military occupation and its apartheid policies privileging Jews over Palestinians looks suspiciously like making a lot of money from colluding with evil.

In the words of the whistleblowing staff, Amazon and Google’s collaboration allows “further surveillance of and unlawful data collection on Palestinians, and facilitates expansion of Israel’s illegal settlements on Palestinian land.”

Neither Amazon nor Google responded to a request for comment on the concerns raised in the letter.

Two employees, Gabriel Schubiner, a software engineer at Google, and Bathool Syed, a content strategist at Amazon, went public on NBC’s website shortly after publication of the letter in The Guardian.

They gave examples of how Israel would be able to use Amazon and Google’s computer services to help enforce the occupation. Data would be used to identify Palestinian homes for demolition, in what are often moves towards land clearances by Israel to build or expand illegal settlements.

And the information collected and stored on the servers would guide attacks on built-up areas in Gaza, which Israel has been blockading for the past 15 years. In previous military campaigns, Israel has bombed Palestinian hospitals, schools and universities.

Amazon and Google’s servers will also assist Israel’s Iron Dome missile interception system, which has helped Israel neutralize rockets from Gaza so that it can maintain an enforced quiet from Palestinians as it keeps them caged and imposes a starvation diet for the enclave’s inhabitants.

The two employees also noted that Amazon and Google will be directly implicated in Israel’s wider apartheid policies of the kind criticized earlier in the year by human rights groups, including the Israeli occupation watchdog B’Tselem.

Nimbus will serve the Israel Lands Authority, which not only allocates lands for illegal settlements but oversees discriminatory policies in land allocation inside Israel that openly privilege Jews over the fifth of the Israeli population who are Palestinian natives.

Israel claims these so-called Israeli Arabs are equal citizens but they suffer systematic discrimination, as B’Tselem and the New York-based Human Rights Watch have highlighted.

Amazon and Google have ignored previous calls from staff to prioritize Palestinian rights over increased profits from colluding in Israel’s war economy.

In May many hundreds – again anonymously – urged both companies to sever their ties to the Israeli military shortly after it killed almost 260 Palestinians, including more than 60 children, in an attack on besieged Gaza.

Figures published this month demonstrated Israel’s central place in the global digital economy. Despite its tiny size, Israel’s share of hi-tech investments now amounts to a third of those made in European countries.

Israel has particularly benefited from the growing demand in the West for its surveillance technologies, cyber weapons and developments in militarized artificial intelligence. The Israeli military and offshoot startups launched by retired soldiers have a competitive edge, claiming that their technologies have been “battle proven” on Palestinians in the occupied West Bank and Gaza.

According to reports in local media, Israel is poised to become a “global data crossroads.” In addition to Amazon and Google, Microsoft, Oracle and IBM are all expected to build server farms in Israel to cash in on the greater integration of digital and military technologies.

The critical role of Israel in hi-tech – from its Intel chip plant to firms like AnyVision and Onavo that offer specialist surveillance, facial recognition and data-mining technologies – means no one can afford to fall out with Israel.

Google and Facebook have already faced criticisms for their work with Israel censoring Palestinians on social media or making them invisible on online maps.

The anonymous staff signing the letter to Amazon and Google sound nostalgic for the days when, they write, the technology they built was designed “to serve and uplift people everywhere.”

But the reality is that tech firms like Amazon and Google have long moved past simple online services such as helping us to buy a book or search for a recipe. The drive for profits, the need to keep competitors at bay and an incentive to avoid state regulation mean they have become key players assisting the “national security state.”

As well as its notorious union-busting initiatives, Amazon has increased the surveillance powers of US state and local police forces and of immigration services that have been harshly criticized for separating asylum-seeking families at the US-Mexico border.

From early on, Google partnered with, or received money from, the CIA, the National Security Agency, the Pentagon and the US State Department.

The 400 or so anonymous employees still hope they can replicate previous victories that ended the tech corporations’ complicity in oppression and military aggression.

In 2019 Google pulled out of Project Dragonfly, intended to help China censor its population’s online searches. And the year before it ditched Project Maven to assist the Pentagon with drone assassinations.

But China was an official enemy, and the Pentagon is still pressing ahead with the drone project, reportedly aided by firms backed by investment funds owned by Google parent Alphabet and a startup tied to a former Google executive, among others, to do the work Google itself had to abandon.

Getting either Amazon or Google to honor their public commitments to ethical behavior by withdrawing from Project Nimbus may prove much harder – and not only because of the contractual obligations Israel has insisted on.

Israel has become too integral to the global surveillance and war industries for any tech giant to risk antagonizing it. With profits galore to be derived from closer collaboration with the military industrial complex, the pressure will be on to forge closer bonds with Israel, whatever its human rights record.

And with the Israel lobby deeply ensconced in Western capitals, the tech corporations will not wish to risk the reputational damage of being tarred as anti-Semitic for boycotting Israel.

Jonathan Cook is an award-winning British journalist. He was based in Nazareth, Israel, for 20 years. He returned to the UK in 2021. He is the author of three books on the Israel-Palestine conflict.