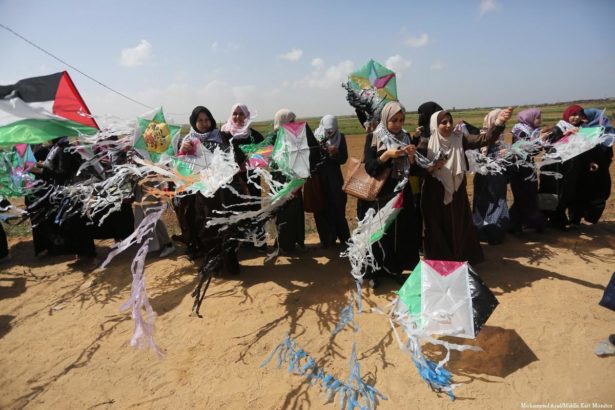 Palestinians march towards the Israeli border on March 29, 2018 in the build up to the Great Return March scheduled for March 30. [Photo by Mohammed Asad/Middle East Monitor]

The Associated Press, a (usually) trusted name in global news, has been unmasked for its pro-Israel bias, and the ruse continues.

Today’s exhibit is of particular significance, as the people of Gaza are about to embark on a large-scale nonviolent protest. True to form, AP has cranked out a Hamas-bashing, Israel-congratulating piece that fails to provide the accurate information its readers deserve. The report largely replicates Israel’s public relations strategy.

Below are excerpts from the AP article with commentary that will fill in some of the gaps and clear up some misrepresentations. Truth matters.

AP: Gaza’s embattled Hamas rulers are imploring people to march along the border with Israel in the coming weeks in a risky gambit meant to shore up their shaky rule, but with potentially deadly consequences.

Many Americans fail to recognize what is going on in Gaza for precisely this reason: nearly every word of this paragraph is problematic. Hamas has not imposed some kind of tyrannical regime over Gaza; their “rule” is shaky in that Israel has such a chokehold on the territory that the people are starving to death. There is little governing going on.

Grassroots movements have been in the making for years – decades, even – because Palestinians don’t need to be told they should resist the occupation. Many can see their original homes in what is now Israel or the location of their villages from the fence imprisoning them. They remember every day; they pray to God to bring them back home. Their people are being slowly, systematically eradicated.

The “gambit” is indeed “risky” – because Gazans will be nonviolently protesting while in the crosshairs of Israeli snipers, and the “potentially deadly consequences” of the initiative will almost certainly involve unarmed Palestinians dying.

Israel has essentially promised this outcome: Major General Yoav Mordechai vowed, “We intend to do everything to prevent violent demonstrations and terror demonstrations.” While Palestinians have made it clear that they will not so much as throw rocks, Israel has 100 sharpshooters at the ready, drones lined up to drop tear gas canisters, and thousands of troops armed to the teeth.

AP: But the first-of-its-kind protest also comes at a low point for the Islamic militant group and the 2 million residents of Gaza, where conditions have deteriorated since Hamas seized control of the territory from the internationally-backed Palestinian Authority in 2007.

Conditions have indeed deteriorated, but this statement is misleading: Hamas was voted into office by the people of Gaza, and Israel collectively punished them for this by imposing a blockade. Combine that with multiple “wars” against the essentially unarmed population with thousands killed and tens of thousands left homeless. “Conditions have deteriorated” is an understatement.

AP: Beginning Friday, Hamas hopes it can mobilize large crowds to set up tent camps near the border. It plans a series of demonstrations culminating with a march to the border fence on May 15, the anniversary of Israel’s establishment, known to Palestinians as “the Nakba,” or catastrophe.

Let’s take a minute to unpack the phrase that tried to sneak past. “The Nakba” is not just an Arabic name for the anniversary of Israel’s birth: it is the name for the forced exile of 75% of their population and the loss of 78% of their land. This catastrophe occurred in 1948, and tens of thousands of Palestinians who live in Gaza today are among those refugees.

AP: The group aims to mobilize hundreds of thousands of people for the effort, though it hasn’t been able to get such turnouts at past rallies. Nonetheless, a jittery Israel is closely watching and vowing a tough response if the border is breached.

Israel lives in a constant state of jitter, but why? Because the stones in Palestinians’ hands are so dangerous? Because the rockets are so deadly? (See here) Or because if Palestinian voices are heard, Israel will be exposed?

AP: An Israeli-Egyptian blockade, along with three wars with Israel and a series of sanctions by Palestinian President Mahmoud Abbas, have left Gaza’s economy in tatters. Unemployment is well over 40 percent, tap water is undrinkable and Gazans receive just a few hours of electricity a day.

Israel is the occupying power over Gaza. The occupation is now in its 6th decade, and the blockade in its 11th year. Israel has an obligation as occupier to maintain the lives and wellbeing of the occupied. Egypt and Abbas are minor players in this situation.

All Gazans are suffocating, not just Hamas. That is why this movement is happening right now. This is not some ploy by a terrorist organization to make trouble for Israel. It is the organic response of Palestinians who can endure no more, who must resist.

AP: [Mkhaimar Abusada] said that for Hamas, the protests can divert attention from their domestic woes while avoiding renewed war with Israel. “They think busying Israel with this issue may put it under pressure,” he said.

What the people actually think is that perhaps this time, the world will pay attention and finally realize that the level of cruelty and injustice being perpetrated on Palestinians is a huge, ongoing crime against humanity. The hope is not to “busy Israel” but to seek the rights that have been promised them by international law: the right to self-determination, the right to return to the land from which they were exiled, the right to be heard and to receive justice.

AP: A combination of social pressure and curiosity in a territory with few options for recreation could help attract people.

This statement shows an inexcusable level of ignorance: it assumes that Palestinians are content with a never-ending, illegal occupation and blockade; that they would not be inclined to march in resistance against their oppressor; and above all that people attending the protest would come for recreational purposes.

AP: Israel opposes any large-scale return of refugees, saying it would destroy the country’s Jewish character.

It’s hard to decide how to respond to this statement. Yes, having refugees pour into one’s country can be upsetting to one’s culture. The Palestinians were willing to take in Jews in the early 20th century, at a high social cost. The thanks they got for this gesture was to be themselves made refugees. Of course Israel opposes the return of non-Jews. But return they must, according to international law and consensus.

AP: Israeli Cabinet Minister Yoav Galant said, “Hamas is in distress. They are using in a cruel and cynical way their own population in order to hurt them and to hurt Israel.”

Israel has massive military might, and Israel and AP both know it. With one of the most advanced armies in the world, $10 million a day in military aid coming from the US, at least 100 nuclear weapons, and a military that is armed to the teeth, this march is not going to “hurt” Israel in any reasonable sense of the word. The only real pain the state can anticipate is the fear of being found out.

AP: “We will try to use the minimum force that is needed in order to avoid Palestinians wounded and casualties. But the red line is very clear. They stay on the Gazan side and we stay in Israel.”

Only time will tell what “minimum force” looks like, but in a nation where children can be imprisoned for years if they are suspected of throwing a stone, chances are Palestinians will die.

Most Western media, if they cover this event at all, will publish inaccurate, biased accounts that will make the Palestinians out to be the aggressors. They will completely fail to ground the story in the context of illegal occupation and blockade, not to mention dispossession and forced exile. Israel will come out looking like it acted in self-defense, and the injustice will continue unchecked as it has for lo these many years.