You Are Here: Home → Israeli forces kill 6 unarmed marchers and a farmer in Gaza and injure hundreds.

Israeli forces kill 6 unarmed marchers and a farmer in Gaza and injure hundreds.

Israeli forces have killed seven unarmed Palestinians in Gaza, including a 16 year old, as thousands march for freedom and to return to their homes.

The “Great March of Return” has been organized by civil society organizations and all political factions in the besieged enclave.

Israel has perpetrated an 11-year blockade against Gaza’s 2 million men, women, causing malnutrition. Many are refugees and their descendants from the 1948 war of ethnic cleansing by which Israel was created and stole their homes and land.

Al Jazeera (Article has been updated)

At least seven Palestinians have been killed and hundreds of others wounded during clashes with Israeli forces as thousands marched near Gaza’s border with Israel in a major demonstration marking the 42nd anniversary of Land Day.

Mohammed Najjar, 25, was shot in the stomach in a clash east of Jabalia in the northern Gaza Strip, while Mahmoud Muammar, 38, and Mohammed Abu Omar, 22, were both shot dead in Rafah, the Palestinian health ministry said in a statement on Friday.

The other three victims were identified as Ahmed Oudeh, 19, Jihad Freneh, 33, and Mahmoud Saadi Rahmi, 33.

Earlier on Friday, Omar Waheed Abu Samour, a farmer from Gaza, was also killed by Israeli artillery fire while standing on his land near Khan Younis, just hours ahead of the demonstrations.

There has been no immediate confirmation from the Israeli army of the strike that killed Samour.

More than 550 Palestinians were also injured after Israeli forces fired live ammunition at the protesters and used tear gas to push them back from a heavily fortified fence, according to the Red Crescent.

Adalah, a legal centre for Palestinian rights in Israel, condemned the Israeli forces’ use of force, calling it a violation of international law.

“Live gunfire on unarmed civilians constitutes a brutal violation of the international legal obligation to distinguish between civilians and combatants,” the group said in a statement.

It also said that it would launch an investigation to “demand those those found responsible for the killings be brought to justice”.

Friday’s demonstration commemorates Land Day, which marks the day – March 30, 1976 – when six unarmed Palestinian citizens of Israel were killed by Israeli forces during protests against the Israeli government’s decision to expropriate massive tracts of Palestinian land.

Protesters in Gaza gathered in five different spots along the border, originally positioned about 700 metres away from the fence.

According to Israeli media, Israel’s army deployed more than 100 snipers on the other side of the border with permission to fire.

The march was called for by all political factions and several Palestinian civil society organisations in the besieged enclave.

Protesters said the main message of the march was to call for the right of return for Palestinian refugees.

Some 70 percent of Gaza’s two million population are descendants of Palestinians who were driven from their homes in the territories taken over by Israel during the 1948 war, known to Arabs as the Nakba.

Speaking to the protesters, Hamas leader Ismail Haniya said: “The Palestinian people have proved time after time that they can take the initiative and do great things. This march is the beginning of the return to all of Palestine.”

Friday’s protest also kicked off six weeks of a sit-in demonstration along the border leading up to the commemoration of the Nakba on May 15.

It is expected that the United States will be transferring its embassy from Tel Aviv to Jerusalem around the same time, following President Donald Trump’s declaration of Jerusalem as the capital of Israel in December 2017.

According to IMEMC, the Israeli ministerial cabinet held a special meeting Wednesday to discuss the expected protests. “The Cabinet decided to significantly increase military deployments, in addition to using live fire and shoot to kill orders ‘if the Palestinians breach (or approach) the security fence.’” Israeli forces have frequently killed and injured people taking part in unarmed protests.

The Nakba did not start or end in 1948: Key facts and figures on the ethnic cleansing of Palestine. 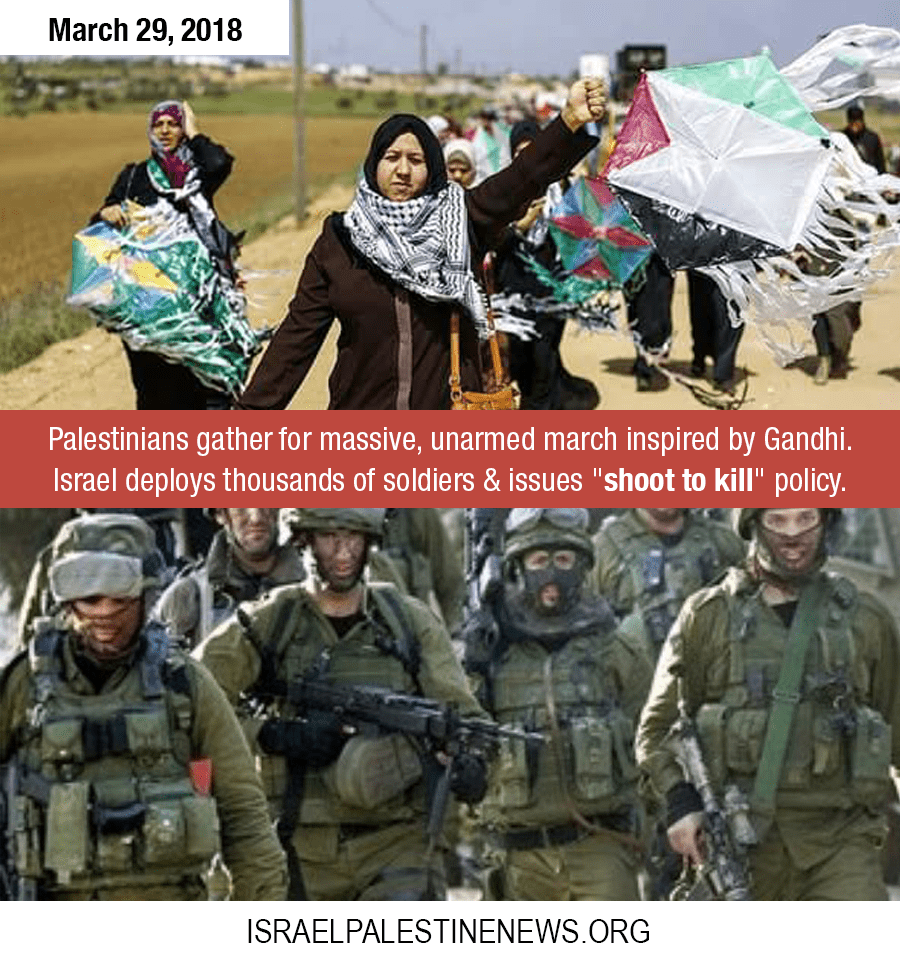