You Are Here: Home → Israeli military, settlers are breaking records in violence toward Palestinians

Israeli military, settlers are breaking records in violence toward Palestinians 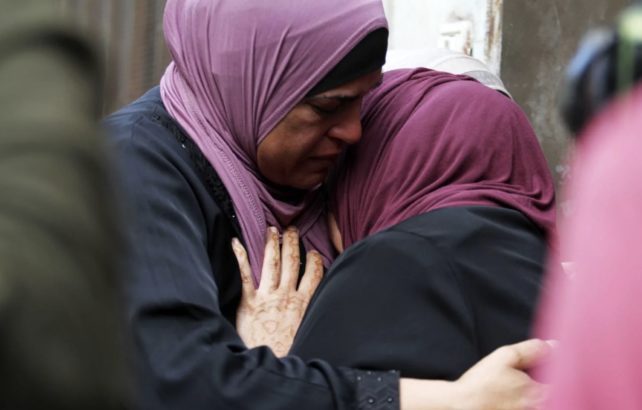 (It’s important to remember that Israeli ‘settlements‘ are actually illegal Jewish-only colonies on confiscated Palestinian land. Many analysts feel that a more accurate term for their inhabitants is ‘colonists’ rather than ‘settlers.’)

October has seen the highest number of Palestinians killed by Israeli fire across the occupied West Bank, including East Jerusalem, in 2022 so far, according to data compiled by Middle East Eye.

Israeli forces killed at least 29 Palestinians in the West Bank last month, making October the deadliest month there so far in what the United Nations’ humanitarian office said on Tuesday was on course to be the “deadliest year” since it started counting fatalities across the Palestinian territories in 2005.

According to MEE’s analysis, it is also the highest death toll in the West Bank in a single month since May last year during nationwide Palestinian protests against Israeli attacks on al-Aqsa Mosque, the Sheikh Jarrah evictions and the bombardment of the Gaza Strip.

The last time before 2021 that the monthly toll exceeded 30 deaths was between October and December 2015 at the height of a wave of stabbing attacks by Palestinians.

At least five of those who died in October after being shot by Israeli security forces were boys. The youngest of them was 12-year-old Mahmoud Mohammad Samoudi from Jenin who died in hospital on 10 October from Israeli gunshot wounds he sustained on 28 September during an army raid.

More than half of those killed in October were most likely unarmed when they were shot dead, according to Palestinian officials and media reports.

Fifteen people were shot as bystanders, in protests, during army raids or army-protected settler attacks.

On 3 October, Israeli forces opened fire at three Palestinians while they were inside a vehicle returning from work, killing two and wounding the third.

Israeli forces said the three had attempted a car-ramming, but the accusation was denied by eyewitnesses and the wounded survivor.

In a rare incident, a senior member of the Lions’ Den armed group died on 23 October in what appeared to be a targeted explosion in the Old City of Nablus.

Palestinians accused Israel of being behind the attack. The Israeli army did not comment on the explosion.

Two members of the Civil Defence, which is part of the Palestinian Security Services, were killed on 28 October after a shooting at a military post in unclear circumstances.

Five others were killed during armed clashes with Israeli troops during raids in the northern West Bank cities of Jenin and Nablus. Four were shot dead after carrying out shooting and car-ramming attacks at Israeli settlers and soldiers.

Palestinians killed three Israelis, two soldiers and one settler, in separate attacks across the West Bank that targeted military checkpoints and settlements.

The October casualties topped a growing trend of violence since the start of the year.

Israeli forces and settlers have killed 130 Palestinians in the West Bank in 2022 so far, according to data collected by MEE based on UN figures, the Palestinian health ministry and MEE’s reporting.

This level of violence in the West Bank has not been recorded since the tail end of the Second Intifada.

In a report on Tuesday, the United Nations’ Office for the Coordination of Humanitarian Affairs (OCHA), which provides humanitarian assistance in the occupied territories, said: “So far, 2022 is the deadliest year for Palestinians in the West Bank, on a monthly average since the United Nations started counting fatalities systematically in 2005.”

According to Defense for Children International Palestine (DCIP), at least 28 Palestinian children have been shot and killed by Israeli forces or settlers in the West Bank since the start of year.

Ayed Abu Eqtaish, the group’s accountability programme director, said in a statement last month that Palestinian children are not safe under the Israeli occupation.

“No one has been held accountable. By routinely resorting to intentional lethal force in situations not justified under international law, Israeli forces have created an environment where no Palestinian child is safe,” Abu Eqtaish said.

An additional 49 Palestinians were killed in the Gaza Strip during a three-day Israeli bombardment in August, including 17 children, the youngest of which was four-year-old Jamil Nijm Jamil Nijm.

The violence this year comes as Israeli troops increase operations in the West Bank to stamp out a growing threat from emerging Palestinian armed groups, mainly the Lions’ Den in Nablus and the Jenin Battalion in Jenin.

The two groups based in the north of the West Bank have no direct affiliations with traditional Palestinian parties and their members are cross-factional.

They are made up of dozens of young fighters, mostly in their 20s, who say they operate against Israeli targets in response to the ongoing occupation.

Almost 1,200 attacks were carried out against Palestinians by Israeli occupation forces and Israeli settlers across the occupied West Bank in October, a report by the Wall and Settlement Resistance Authority has revealed.

Most of the attacks took place in Hebron, followed by Nablus and then Ramallah. The nature of the attacks included violent land grabs, arrest campaigns, damage to agricultural land and city closures resulting in bodily harm.

“The number of attacks carried out by Israeli settlers reached a record number last month, with 254 attacks,” said Muayyad Shaaban, the head of the local anti-settlement organisation. He added that the occupation authorities issued twelve orders linked to Palestinian-owned structures, ranging from demolition, orders to stop building work and evacuation notices to Palestinian families in Qalqiliya and Tubas.

The report pointed out that a total of 1,584 olive trees are known to have been damaged and uprooted by illegal Jewish settlers. Israeli settlers have been responsible for destroying thousands of olive trees in the occupied territories over the years, primarily around harvest season to maximise the damage and effect on Palestinian farmers.

Shaaban noted that Israeli settlers, particularly extreme right-wingers, are rarely held to account by the occupation authorities. Indeed, in most cases, the settlers who harass and attack Palestinians are accompanied and protected by Israeli soldiers.

Israeli human rights movement Peace Now estimates that about 666,000 settlers live in 145 large illegal settlements and 140 outposts in the occupied West Bank, including Jerusalem. International law considers the West Bank and Jerusalem to be “occupied territories”, and all settlements and settlers are illegal.

Speaking to the UN Security Council last week, the special coordinator for the Middle East Peace Process, Tor Wennesland, said that “a spike in fatal violence” is causing 2022 to be the deadliest year for Palestinians in the West Bank since 2005, the year when the UN started tracking fatalities. Over the past month, said Wennesland, Israeli security forces killed 32 Palestinians – including six children – and injured 311 during demonstrations, clashes, attacks and search-and-arrest operations.

At least 125 Palestinians have been killed in Israeli raids and attacks in the West Bank and East Jerusalem this year alone.

RECENT PALESTINIAN DEATHS AT THE HANDS OF ISRAEL: