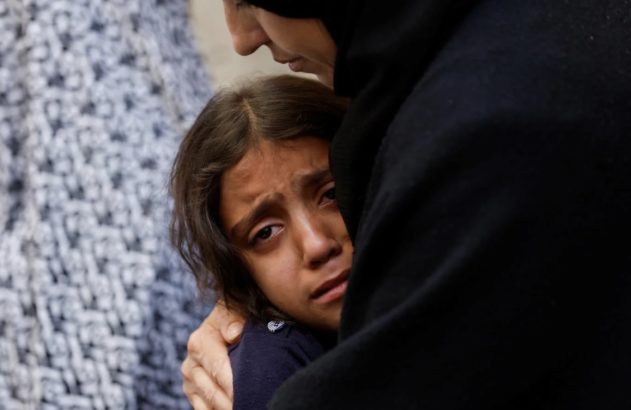 Palestinians mourn neverending Palestinian deaths (Pictured: A child reacts during the funeral of Daoud Rayyan who was killed by Israeli forces on 3 November 2022) (Reuters)

Thursday proved deadly for Palestinians, in a year that has seen more Palestinian deaths in the West Bank than any year since UN record-keeping began.

This is a developing story. Please check back for updates.

Israeli forces have gunned down at least four Palestinians – one a teenager – in the occupied West Bank and occupied East Jerusalem today. The incidents occurred as votes are being counted in Israeli national elections, in which former Prime Minister Benjamin Netanyahu and his far-right allies are expected to win.

This violence is part of a recent uptick in Israeli attacks on Palestinians, some of them resistance groups organized to oppose Israel’s 55-year occupation and apartheid policies.

In what has become a common occurrence, many Israeli army vehicles carrying troops raided the Palestinian city of Jenin, epicenter of the resistance, Thursday afternoon. The Israeli military indicated that the operation’s objective was to target Farouk Jameel Salamah, age 28. Salamah – who was to be married this weekend – was shot in the head, chest, and abdomen.

Salamah was part of the resistance, and had allegedly participated in the killing of an Israeli commando during a raid on Jenin last spring, He had not been tried.

In the same operation, Israeli soldiers also killed Mohammad Samer Khallouf, 14, as they fired on a group of protesters with live fire in Jenin refugee camp.

Earlier in the day a Palestinian man, Amer Halabiya, age 20, allegedly stabbed an officer in Jerusalem’s Old City. He was shot dead, Israeli police said. Two other officers were also injured at the scene – all with light to moderate injuries.

[NOTE: In at least two recent stabbing incidents, carried out by Israeli settlers, no perpetrators were shot or arrested.]

Two hours before the killing of Halabiya, another Palestinian was also shot dead near Jerusalem.

Daoud Rayyan, 42, was killed when Israeli paramilitary border guards raided the village of Beit Duggu with the intention of ransacking the home of Habis Abdel Hafeez Rayan, who had been shot to death Wednesday after allegedly carrying out an attack against Israeli soldiers.

Also on Sunday, another Palestinian was killed after an alleged attack.

After several Israeli soldiers were mildly to moderately injured in a car-ramming incident, Barakat Mousa Odah, 49, a married father of six children, was shot to death without arrest or trial.

These deaths bring the 2022 Palestinian death toll in the West Bank to 135 – 29 of them children; 23 Israelis have also been killed.

The violence came as a political shift is under way in Israel after national elections, with former Prime Minister Benjamin Netanyahu likely to return to power in a coalition government made up of far-right allies. Itamar Ben-Gvir, one of the most extreme among them, stated Wednesday that Israel needs to get tougher on Palestinians who carry out attacks.