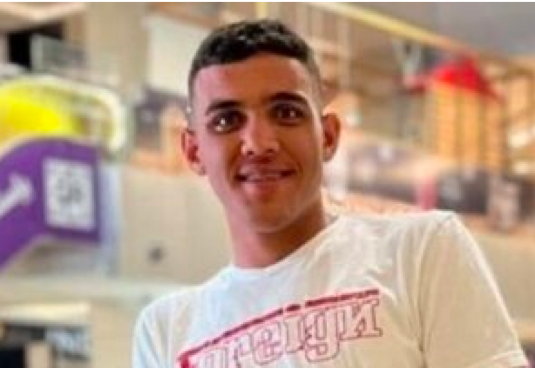 Israeli soldiers killed Mosab Nafal as his family harvested olives. An Israeli spokesperson claims he was shot while throwing stones – his family disagrees. He is the 197th Palestinian to be killed by Israeli forces this year.

On Saturday evening, November 5, Musab Nofal was hit with a fatal bullet to the chest in the town of Sinjil northeast of Ramallah. The 18-year-old is the 197th Palestinian to be killed by Israeli forces this year.

On Sunday, November 6, Musab Nofal’s family, friends, and members of the community, along with reporters and onlookers, laid him to rest in the village of Mazraa Al-Sharqiya in the Ramallah governorate.

The Israeli army reported that its soldiers had killed Nofal under the pretext that he had been hurling stones at Israeli settlers. No settlers have been reported injured.

Faten Elwan, a Palestinian journalist and cousin of the slain young man, reports that the Israeli army claims are fabrications. “Settlers attacked them as they picked olives, and they threw stones,” Elwan wrote on her Facebook page. “The Israeli narrative that someone had fired from the Sinjil area is false.”

“My aunt’s son was killed as he picked olives,” Elwan wrote shortly after the news broke.

Friends and family must not only grapple with the loss of their kin, but must do so while navigating how the Israeli army has shaped the narrative of the circumstances of Musab’s death.

In Sinjil, where Nofal was killed, settler attacks against Palestinian farmers have become commonplace. In April of this year, three Palestinian farmers from Sinjil were injured, including the head of the village council. These attacks have continued every month, often resulting in injury to farmers or active obstruction of access to their lands and produce. These settler attacks are an assault on Palestinian means of subsistence and economic survival.

The olive harvest season has only seen an escalation of these attacks.

Settler attacks on the rise

“We still don’t know if it was the army or the settlers that shot [Musab],” Elwan explained.

Elwan’s statement highlights that settlers and the Israeli army are often part of the same colonial attack on Palestinian livelihood and existence. When Palestinians develop their capacities to resist settler attacks, it is the Israeli army that swoops in to punish Palestinians for resisting. In this sense, the settlers function as the vanguard of the colonization process, and the army provides backup. This is a far cry from the common mainstream designation of settlers as radical extremists or anomalies — they are in fact an integral part of the state’s colonization plans.

“Trained citizens who hold weapons in the public sphere contribute to the feeling of security,” Israel’s public minister Gilad Erdan said in a statement in 2018. The increase in settler outposts also coincided with the loosening of Israel’s open-fire policy and relaxing the regulations for the possession of firearms by Israeli civilians.

Moreover, the Israeli Civil Administration has pushed for the legalization of Israeli farm outposts in the West Bank in September of this year. Both the Defense Ministry and the Justice Minister must approve it. By formally annexing Palestinian lands, settlers would be seen as citizens defending themselves against Palestinian terrorists, rather than invaders being repelled by the land’s rightful inhabitants.

Last year, on December 24,  Ghadeer Musalma, 55, was run over and killed by a settler near Sinjil on Highway 60. In a similar incident in 2014, two girls (Inas Dar Khalil, 5, and Tuleen Asfour, 8) were also run over by a settler. Dar Khalil was killed, while Asfour suffered from lifelong injuries. No settler has been held accountable for any of these crimes.

The arming of settlers in the West Bank continues to lead to the death of Palestinians, as Israel remains immune to international diplomatic, political, and economic accountability for its daily crimes. At the same time, Palestinian resistance continues to rise in response.