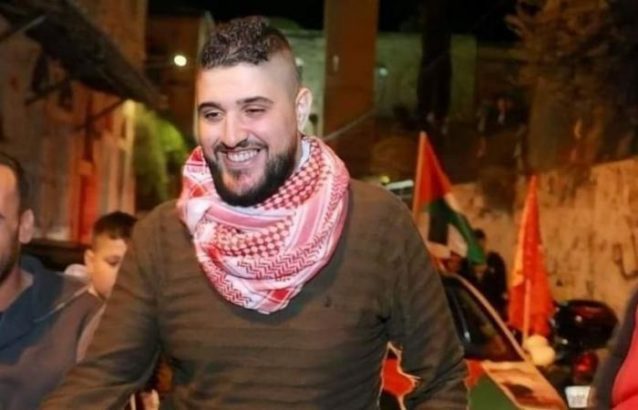 Palestinian resistance leader Tamer Zeid al-Kilani, 33, was killed while walking in the occupied West Bank. He was a married father of a 2-year old son and a 5-month-old daughter.

The West Bank has been occupied since 1967, the population is largely imprisoned by Israeli forces that control all official entrances and exits. Israel was established in 1948 through a war of ethnic cleansing – many of the inhabitants, both Muslim and Christian, fled to the West Bank and Gaza, their homes and land in what is now called Israel confiscated by the newly created Jewish state

One of the leaders of the recently formed ‘Lion’s Den’ resistance organization in Nablus was killed Sunday morning at 1:30 am when he was walking in the old city of Nablus.

According to local sources, Tamer Zeid al-Kilani, 33, a senior member of the Lion’s Den resistance group, was walking past a motorcycle that had been loaded with explosives when the bicycle exploded, killing him.

Tamer, from the Fatayer Mountain neighborhood in Nablus city, was a married father of two children: a baby boy only two years of age and an infant girl of five months.

Palestinian sources said the bicycle with explosives was planted by an Israeli undercover force, and that the Israeli army was behind the operation to target and assassinate al-Kilani.

Al-Kilani was seen on a surveillance video around 1:30 am near the area where the motorcycle was planted.

Bakr Abdul-Haq, a Nablus correspondent with Quds News Network, said an explosive charge was placed in a motorcycle in the Al-Yasmina neighborhood in the center of the Old City of Nablus, adding that the explosion took place just approximately at 2 am, just as Tamer walked by it.

He added that the explosion severely mutilated Tamer’s body, including severing his limbs and causing extensive internal organ damage, resulting in his death.

Tamer was a married father of several children and was also a former political prisoner who was repeatedly abducted and imprisoned by Israel. Bakr said the explosive was placed in the motorcycle by a collaborator with the illegal Israeli occupation, adding that this person was pretending to be a delivery man before placing the explosive charge and fleeing the area.

Tamer was one of the prominent leaders and founders of the Lion’s Den, had very close ties with resistance fighters and groups regardless of their political affiliation, and believed in unifying the resistance against the illegal Israeli occupation.

The Lion’s Den issued a statement mourning the slain Palestinian, the fifth of its leaders to be killed by the army in recent months, and vowed to retaliate and continue its resistance to this illegal Israeli occupation, regardless of its offensives and assassinations.

The Lions Den announced that there would be an immediate and severe response to the assassination of one of its senior leaders.

The group said that al-Kilani’s funeral would be held on Sunday afternoon in Nablus. He was 33 years old, and had helped establish the resistance group after having lost friends to the Israeli military occupation, and having spent 8 years in Israeli prisons without any formal charges being made against him. He had been suspected of being a member of the armed wing of the leftist Popular Front for the Liberation of Palestine (PFLP).

The PFLP issued a statement condemning his death, which they said was a targeted assassination due to his affiliation with the Palestinian resistance. In their statement, the PFLP said that “the assassination operation will not succeed in stopping the revolutionary tide that our fellow hero helped launch together with his brothers and committed comrades.”

The statement continued, “The answer will be through further escalation of the resistance and confrontation with the occupation on all fronts and axes, and hitting all agents, traitors and infiltrators with an iron fist.”

The city of Nablus has been under severe martial law, with Israeli forces infiltrating the city and its surrounding refugee camps and attacking Palestinians on a daily basis, since August when the new resistance group was formed.