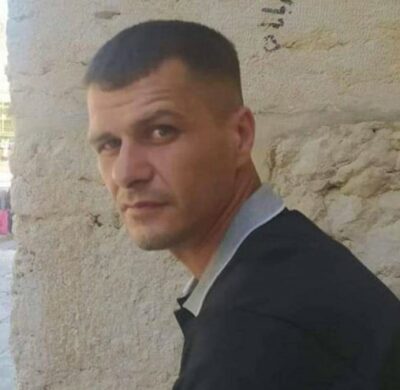 Israeli soldiers shot Rabi Arafa Rabi, 32, in the head. Rabi’s father says Rabi was just a construction worker trying to earn a living and was engaged to be married this coming Friday

Rabi is the 19th Palestinian killed by Israeli forces this month, half of them teens/children

On Saturday evening, Israeli soldiers killed a Palestinian worker near a military roadblock of a section of the illegal Annexation Wall southeast of Qalqilia, in the northern part of the occupied West Bank.

Media sources said the soldiers shot the workers near a military roadblock, known as 109, close to Nabi Elias village when the army fired many live rounds at Palestinian workers trying to cross.

The Palestinian Health Ministry said the soldiers shot the worker, Rabi Arafa Rabi, 32, with a live round in the head before Palestinian medics rushed him to Darwish Nazzal governmental hospital in Qalqilia before he was rushed to Rafidia hospital in Nablus, where he succumbed to his serious wounds. The slain man’s father, from Qalqilia, said the soldiers executed his son in cold blood, adding that Rabi was just a construction worker trying to earn a living and was engaged to be married this coming Friday.

It is worth mentioning that the army frequently attacks, chases, injures, and abducts Palestinian workers near the gates of the illegal Annexation Wall near Qalqilia, Jenin, and other parts of the West Bank.

[Rabi is the 19th Palestinian killed by Israeli forces this month, half of them teens/children; two Israeli soldiers have been killed this month.]