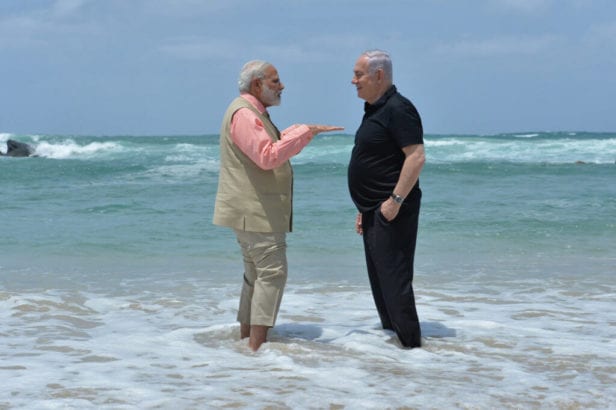 The United Arab Emirates is seeking more support from the United States, and it believes it must go through Israel to get it.

Other nations also understand the power of the Israel lobby in the US… Egypt, India, Russia, Saudi Arabia, Honduras, Qatar, Tunisia, Congo, Venezuela

Obama himself acknowledged the lobby’s gatekeeper role when he reached out to Malcolm Hoenlein, executive vice chair of the Conference of Presidents of Major American Jewish Organizations– and a rightwing supporter of Israeli settlements– in order to hire Hillary Clinton as secretary of state

So in his most important appointment, Obama needed to show ‘credibility’ with the Israeli government and its lobby! That is real clout

You can’t understand American foreign policy in the Middle East without assessing the role of the Israel lobby in Washington.

Israeli analysts regularly address this influence, though no one in the American press does. It’s just too undemocratic a truth. Our press has a hard enough time with the more limited theory of the lobby’s influence to even consider this wide-ranging role…

By Philip Weiss, reposted from Mondoweiss
There is only one way to look at the UAE-Israel deal: The United Arab Emirates is seeking more support from the United States, and it believes it must go through Israel to get it. Mohammed bin Zayed figures if he pleases Israel and its lobby, he will gain favor from the reigning superpower. For instance, he will receive advanced weaponry that only friends of Israel can get. And so much for the Palestinians!

This understanding of the Israel lobby’s power goes well beyond the conventional view of the lobby as influencing US policy with respect to Israel and Palestine. But the assessment is not mine alone. It is a widely-held belief in world capitals. Even Vladimir Putin and Narendra Modi have acted in similar fashion: looking on the Israel lobby as a gatekeeper to Washington. And in power politics, perception is reality.

Israeli analysts regularly address this influence. Though no one in the American press does. It is just too undemocratic a truth. Our press has a hard enough time with the more limited theory of the lobby’s influence to even consider this wideranging role.

Let’s run down a list of countries and their conduct toward the US/Israel that confirms this theory.

—Egypt. The most direct predecessor to the UAE is Egypt. Anwar Sadat did not act out of altruism in reaching out to Israel in 1977. He wanted American support, and it was his “perception” that Jews were the gatekeepers, writes a powerful American Jew.

“Sadat had broken with the Soviets and was casting his lot with the Americans. He realized that if he wanted to replace Soviet weapons with meaningful American military and economic support, he could get it only by making a bold move with Israel, because of his perception of the political influence of American Jews and, more broadly, the support of the American public for Israel,” Stuart Eizenstat, the political veteran and Israel lobbyist in his own right, wrote in his book about the Jimmy Carter years.

—India. For 45 years after the creation of Israel, India supported the inalienable rights of the Palestinian people. Then in 1992, it changed that policy to gain the favor of the United States, on the eve of the Indian PM visiting the U.S.

An Israeli thinktank reports that India reversed its stance on Israel because of the perceived “influence of the Jewish lobby” to release aid from the U.S., the International Monetary Fund and the World Bank too, which “India desperately needed at that time.” Vinay Kaura, an Indian scholar published by the Begin Sadat Center for Strategic Studies in Israel, writes:

That perception of the lobby’s power continues to this day, as in Modi’s decision to visit Israel in 2017, Kaura writes:

It was recognition of the influence of the Jewish lobby in the US that promoted this positive development in Indo-Israeli relations. When Modi made his historic visit to Israel on July 4-6, 2017, the former US ambassador to Israel, Dan Shapiro, tweeted that the “stunningly successful visit of Indian PM Modi this week was a huge strategic win for Israel.”

—Russia. In 2018, Axios reported that the Russians had used the Israelis as an intermediary to Washington in a failed effort to cut a grand deal for removal of Iranian forces from Syria in exchange for sanctions relief with Iran. Barak Ravid, an Israeli reporter, said that Netanyahu was the gatekeeper on the offer, and blocked the deal because of sanctions relief.

‘They [the Russians] asked us to open the gates for them in Washington,’ one Israeli official told me,” Ravid wrote.

—Saudi Arabia. The Saudis have not officially normalized relations with Israel, but they are said to be working behind closed doors with Israel, in opposition to Iran. The Saudis have gained a lot from that cooperation: they have used the Israel lobby to protect themselves from criticism in the U.S. over the murder of Jamal Khashoggi and the genocide in Yemen.

In 2018, for instance, the Republican House blocked legislation critical of Saudi Arabia, and Eli Clifton reported that Saudi Arabia had a key political asset in lobbyist Norm Coleman, the fervent Israel supporter who as national chair of the Republican Jewish Coalition is very close to Sheldon Adelson, who of course is a major donor to Republicans, and whose only issue is Israel. Clifton said that Saudi Arabia was paying $125,000 a month for Coleman’s influence.

Norm Coleman sits at the hub of some of the House GOP’s biggest sources of campaign spending. And Coleman isn’t shy about saying what his Saudi employers are expecting from him.

Saudi Arabia also got support from United Against Nuclear Iran, a very pro-Israel group funded in part by Thomas Kaplan. Clifton reports that Thomas Kaplan attended an event with the Crown Prince three months after the murder of Khashoggi, when every decent person was avoiding Mohammed bin Salman like the plague. A leading supporter of Israel, Kaplan has connections to Sheldon Adelson and the Council on Foreign Relations, as well as to liberal institutions like the 92d St Y in New York and the Belfer Center at Harvard’s Kennedy School.

The fact that the Saudis relied on the Israel lobby was echoed last September on the Israeli channel i24News. Edy Cohen, an Israeli expert on Arab politics at the Begin and Sadat Center, said that bin Salman was cultivating Israel because the “Jewish lobby is very strong” in the United States. “AIPAC is very strong.” And in order to maintain American support, Saudi Arabia turned to the lobby and Israel, Cohen said.

Within days of the Khashoggi murder, Netanyahu interceded for the Saudis to try to get the U.S. to overlook the killing. And the U.S. has overlooked the murder.

—Honduras. In January 2019, Barad Ravid reported that Honduras had reached out to Israel so as to get a meeting with the U.S. Secretary of State. Netanyahu got him that meeting, for his own ends. Ravid wrote on Axios:

[Juan] Hernández asked Netanyahu to get him a meeting with Pompeo because he couldn’t reach him for a long time. They added that Netanyahu asked Pompeo to join his meeting with Hernández, which dealt mainly with the issue of moving the Honduran embassy to Jerusalem.

—Qatar. Qatar flew Alan Dershowitz and Morton Klein out to visit the country in 2017 as part of an effort to erase its “pro-terrorist” label over previous support for Palestinian resistance. Dershowitz promptly wrote an article for the Hill saying that Qatar should not be blockaded and isolated. And Qatar later came through for the Israel lobby itself– it killed Al Jazeera’s undercover four-part documentary of the Israel lobby’s activities in the U.S. Though the doc has come out in bootlegged form.

I could go on and on. Here are three more quick examples:

–In 2019, a Tunisian presidential candidate spent $1 million to hire a Canadian firm headed by a former Israeli intelligence officer to try and get a meeting with Donald Trump. The deal’s exposure hurt the candidate politically but it does follow a pattern of Tunisian politicians quietly normalizing relations with Israel and getting access in D.C.

–Juan Guaido the would-be leader of Venezuela has declared that he would restore relations with Israel that Marxist governments had cut off ten years ago out of concern for Palestinians. Guaido has of course had the support of the Trump administration against the Maduro government.

Call it conspiracy or the usual workings of a superpower and a client state; but this pattern of friendship-with-Israel-in-exchange-for-access is now widely emulated. Edy Cohen of the Begin Sadat Center explained last year in a piece for the Jewish News Service that the Gulf states were acting on that basis, for self interest:

The Gulf Arab states are interested in being part of the Western world—not necessarily out of a love of Zion, but because they understand that the path to warmer ties with the West and the United States runs through Israel…

[G]enuine peace is not the object of the Gulf states aspirations, but rather the outcome of interests, as well as the need to maintain security and stability and maintain U.S. aid.

What’s most fascinating about this theory of access is that there are unquestionably a number of examples to support it, but the American press would never touch it. And still the pattern is clear: many powerful leaders regard the lobby as a gatekeeper. And you can’t understand American foreign policy in the Middle East without assessing the role of the Israel lobby in Washington.

Barack Obama himself acknowledged the lobby’s gatekeeper role when he reached out to Malcolm Hoenlein, executive vice chair of the Conference of Presidents of Major American Jewish Organizations– and a rightwing supporter of Israeli settlements– in order to hire Hillary Clinton as secretary of state. The New York Times reported six years after the fact:

Once elected, Obama seemed to understand that he needed someone to lend him credibility with the Israeli government and its American defenders, a tough friend of Israel who could muscle the country away from settlements and toward a peace agreement. An aide to Obama called Malcolm Hoenlein, the executive vice chairman of the Conference of Presidents of Major Jewish American Organizations, and asked him to call Hillary Clinton to see if she would be “agreeable” to being named secretary of state.

So in his most important appointment, Obama needed to show “credibility” with the Israeli government and its lobby! That is real clout. And the pathetic powers of the presidency are revealed in the fact that though Obama reached out to the lobby to say he could “muscle [Israel] away from settlements,” per the Times, he did nothing to slow the settlements. Just as Obama could do nothing to punish Chuck Schumer for opposing him on the Iran deal. The lobby’s powers transcend party politics.

This is why even liberal Zionists urge that Israel support in the U.S. remain bipartisan. They want to preserve that influence by having no public differences in the lobby. Israel support must be as American as mom and apple pie– and Tammany Hall.