You Are Here: Home → Israeli government set up front company to conceal its actions around the world 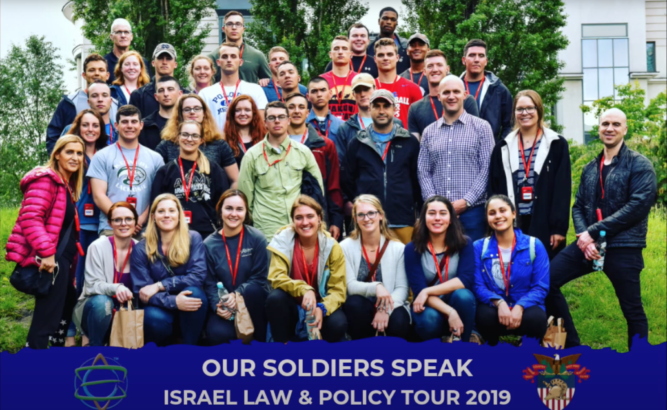 Each year the Israel-advocacy group “Our Soldiers Speak” brings exceptional cadets from the U.S. military academies on its “Israel Strategy and Policy tour.” OSS, a U.S. tax exempt organization, has reportedly concealed the funding it received from the Israeli government. Such behavior is likely a violation of U.S. law. (Image is from video of 2019 tour.)

The Israeli government set up a company called “Concert” so that individuals and groups around the world could conceal the funding they received from Israel to promote projects aimed at improving Israel’s image. Americans doing this would be violating US law. Will they be investigated? Will US media report this to Americans?

By Noa Landau, reposted from The Forward, “Israel set up a front company to fight BDS. This is how it failed” – originally published by the Israeli daily newspaper Ha’aretz (July 29, 2020)

The minutes of the steering committee for a front company established by the Strategic Affairs Ministry in the fight for “mass awareness” against the “delegitimization” of Israel show which projects were funded and the initiative’s failure to raise the amount of donations it promised.

[Editor’s note: the “mass awareness” that concerns Israel is the growing knowledge around the world about Israel’s massive human rights violations.]

Among the projects that the public benefit company, Concert (formerly Kella Shlomo), funded between 2017 and 2020 were delegations of evangelical Christians, an anti-BDS group called Reservists on Duty, and seminars for Israeli backpackers ahead of their long-term trips.

The Strategic Affairs Ministry set up this external body, in the form of a public benefit company, in 2017 to cooperate with people and groups around the world who were interested in using a third party to conceal the funding they received from Israel to promote projects aimed at improving the country’s image.

Two and a half years ago, the cabinet approved allocating 128 million shekels ($37 million) over three years to fund the initiative, on the condition that it raised an equal amount in matching funds from private donors. The cabinet decision stated that the organization would raise these contributions from philanthropic groups or pro-Israel organizations.

The goal of establishing the company, according to the ministry, was to carry out “mass awareness activities” to “implement part of the ministry’s activities concerning the fight against the phenomenon of delegitimization and boycotts against the State of Israel.”

A legal opinion written at the time by the ministry’s legal adviser stated that the activities to be conducted through this company would be those that “require an ‘outside the government’ discussion with the different target audiences.” The ministry explained at the time to journalists that one of the initiative’s purposes was to “provide a rapid and coordinated response against the attempts to tarnish the image of Israel around the world.”

Since its secretive creation, the project has been run in almost complete secrecy. Now, in response to a Freedom of Information Law request submitted by attorney Or Sadan from the Movement for the Freedom of Information and journalist Itamar Baz of the Seventh Eye website, Haaretz is publishing the minutes of Concert’s steering committee.

The first minutes of the steering committee, from July of 2018, show that the company had cash flow problems and asked for advances from the government to get the project started. At the committee’s second meeting in November of 2018, Concert’s representatives reported to the government that creating the “work structure and methods of operation of Concert in the United States has turned out to be a matter of high complexity,” and asked to hire a U.S. lawyer, whose name remains confidential, at a cost of 133,000 shekels.

[Editor’s note: Who is this American lawyer hired by the Israeli government to get around U.S. laws?]

This is partly because the U.S. Foreign Agents Registration Act requires anyone acting in the United States on behalf of a foreign body to register with the Justice Department and provide information on its sources of funding and the use made of the money. All the materials distributed by foreign agents must declare its source, and they must also make their activities clear in every conversation with government bodies. The minutes show that many people and groups in the United States were afraid of cooperating with Concert because of this requirement.

In the third meeting, held in December 2018, the work plan for 2019 was discussed. The CEO recruited for the project, Ayelet Shiloh Tamir, explained that “because of the difficulty and refusal of donors to donate directly to Concert, a mechanism must be allowed through which contributions are transferred to the organization that carries out the activity and from it to Concert.” The money would thus go directly to the organizations and not the company.

In the fifth meeting, in April of 2019, she reported on difficulties in raising donations because of the “political situation” in the U.S., and during the sixth meeting in May of 2019, she reported on the difficulty in raising money because of the “external influences, such as the election period, stages of setting up the company and developments on the issue of FARA.”

The ninth meeting, which the ministry said was the last, was in January, 2020, In it, things had changed and it was Concert’s representatives who complained to the government about a lack of a budget. At this meeting, the company’s chairman of the board, Micah Avni, expressed his dissatisfaction with the low budget for the year just beginning because of the frozen state budget.

“A much higher budget is required than the agreement the government allocated,” he said. “We need flexibility to operate separately from the government, from politics and budget. The company is building relationships with groups and donors who are hesitant about working with the government, something that in itself takes time, but the trust is being rebuilt and the timing is sensitive. … The decision not to keep the government’s commitment according to the cabinet decision is devastating. From the beginning, this was small change for such a broad phenomenon and the value the government will get relative to the true budget required to deal with the phenomenon.”

In response to a question from a government representative as to how many donors were waiting in line for matching funds from the government, Shiloh Tamir answered said there were eight plans in the works but that “it is not possible to approach a new donor because there is no matching to offer them on the part of the state.”

As for the millions that the government and the donors did utilize, the steering committee minutes show Concert’s representatives reporting that 26 contracts had been signed since its establishment. They focused on research and information; awareness campaigns (“defensive and offensive”); the digital battlefield; public relations delegations of “influencers” to Israel, and “strengthening pro-Israeli network.” In terms of research, a project was mentioned on the issue of “corporate responsibility” at a cost of 1.09 million shekels, as well as a project dealing with the “link between BDS organizations and terrorist organizations” at a cost of 2.4 million shekels.

As for “support for organizations in a pro-Israeli network,” the minutes said “a maximum framework for funding was set that is made up of 20 amplification units at a cost of $200,000 each.” Among the organizations mentioned as those who cooperated with Concert were delegations of influencers on the part of a U.S. organization called Our Soldiers Speak [aka the MirYam Institute, tax exempt in US – see this]; delegations of evangelical clergy of Christians United for Israel [Editor’s note: executive director is a Jewish American]; and an organization named Eagles’ Wings, [website here] which Concert staff said is “viewed as more liberal in the evangelical Christian world, so it is able to reach wider audiences.

Another 2.5 million shekels funded a project by the organization Israel-is, whose goal, according to the documents, was “preparing Israelis for their big trip” – providing seminars for backpackers before trips to Latin America and Thailand of the type many Israelis take after completing their military service. The program’s website says its goal is to help and strengthen Israel’s image around the world.

Other funds went to the Zionist Federation in South Africa; an organization named The Israel Allies Foundation [website here], which describes itself as promoting political support for Israel on the basis of Judeo-Christian values; and the Reservists on Duty’s Gideon Group project [see this], which trains Israeli students to counter the BDS movement on campuses overseas, as well as other projects.

Because of Concert’s budgetary dead end, it seems the Strategic Affairs Ministry intends to reduce the company’s budget in coming years and change both its content and the way it operates.

A joint statement by the Strategic Affairs Ministry and Concert said: “The joint initiative by the State of Israel and Concert was created in 2018 following a government decision as part of the fight against the delegitimization of Israel. The initiative, defined as a public-benefit company, devoted its first year of activity mostly to establishing knowledge infrastructures and formulating strategies of action. In the past year and a half, against the backdrop of three election cycles, the freezing of budgets and the global coronavirus crisis, the initiative’s goals were not fulfilled in the manner that was planned. It should be noted that a detailed working plan worth 60 million shekels, which was approved, was not implemented as a result of the transition to a continuous budget. Despite the difficulties, there has been a clear and consistent rise in the volume of the initiative’s activity including the initiation of projects with 50 organizations, dozens of seminars and delegations, training some 1,000 young Israelis for public diplomacy activities around the world.

“The initiative has much potential to advance the State of Israel’s interests in light of the de-legitimization challenges expected for Israel,” the statement continued. “With her entry into the role, Strategic Affairs Minister Orit Farkash-Hacohen instructed a deep look into the project’s activity and to draw lessons that will allow optimal utilization with the intention that Concert continues to work for the State of Israel and its goals.”

Noa Landau is Haaretz’s diplomatic reporter, who covers Israel’s foreign relations, and a member of the newspaper’s editorial board.

Evidence that U.S. pro-Israel groups may have violated U.S. laws