You Are Here: Home → Haim Saban backs Biden; will host a fundraiser next week 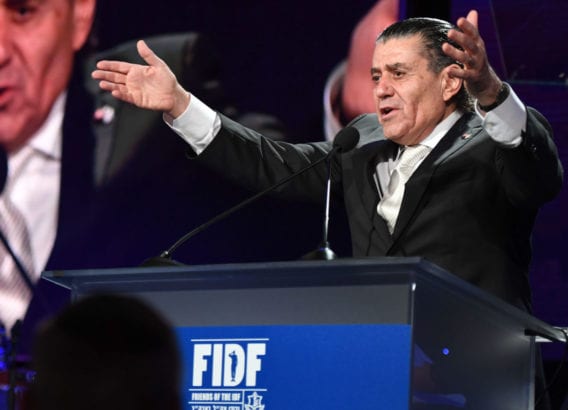 The event will feature Biden, along with Rep. Adam Schiff (D-CA), and costs $500,000 per person… Saban is an Israeli-American billionaire who has stated: “I’m a one-issue guy, and my issue is Israel.”

[Editor’s note: Saban is a billionaire who has stated: “I’m a one-issue guy, and my issue is Israel.” ]

The event will feature Biden, along with Rep. Adam Schiff (D-CA), and costs $500,000 per person, a person with knowledge of the event told JI.

Saban and his wife, Cheryl, who were the largest individual donors to Hillary Clinton’s 2016 presidential campaign, stayed on the sidelines and didn’t endorse any candidate during the 2020 Democratic presidential primary.

“I am pleased to see so many Democrats coming together in support of Vice President Joe Biden, and I am proud to endorse him for president,” Saban told Jewish Insider on Thursday. “Joe is a proven leader who has the experience, vision and heart to unify our country in this hyper-partisan time. Joe’s judgement and track record show that he will broadly restore America’s position as a moral and global leader, and ensure that the strong, bipartisan alliance between the U.S. and Israel remains unshakeable,” Saban explained.

Pointing to comments Biden made in 2013 at a J Street conference — “If there were not an Israel, we would have to invent one to make sure our interests were preserved — Saban said, “I am confident that Joe is the right leader to make real progress for Americans and our international partners, and urge our party to unite in his support.”

[Editor’s note: Support for Israel, with its long history of human rights abuses, damages US interests – see this.]

Jacob Kornbluh is the national politics reporter for Jewish Insider. Kornbluh covers politics with a Jewish angle and regularly interviews political commentators and security experts for Jewish Insider’s Daily Kickoff morning newsletter. He was featured in JTA’s 2018 list of top 50 Jews to follow on Twitter. He previously worked as City Hall reporter for JP Updates and and covered the 2013 NYC mayoral race for the Yeshiva World News.

Biden is most pro-Israel nominee ever