You Are Here: Home → IDF General: Israel Behind Coup That Installed Al-Sisi Dictatorship in Egypt 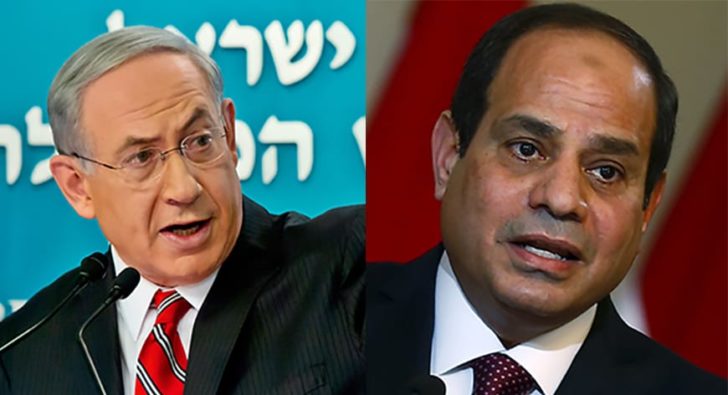 Brigadier General Aryeh Eldad of the Israel Defense Forces (IDF) has claimed that Israel was behind the 2013 military coup that ousted Mohammed Morsi, Egypt’s first democratically elected president. Eldad made the claim in an article published in the Israeli newspaper Maariv.

In the article, Eldad asserted:

The outbreak of the January revolution coincided with the Israeli security assessment that President-elect Mohamed Morsi, a Muslim Brotherhood man, intended to cancel the peace agreement with Israel and send more Egyptian military forces to the Sinai Peninsula.”

Just a few months into Morsi’s presidency, in August 2012, Israel had publicly accused Morsi of violating the peace treaty with Israel after Egypt responded to terrorist attacks in the Sinai by sending an increased number of troops. Morsi’s government accused Israel’s Mossad of having been behind the attacks in order to destabilize his government amid efforts to improve Egypt’s relations with Gaza. Hamas, which has governed the Gaza Strip since 2007, as well as Lebanon’s Hezbollah, also blamed Mossad for the attacks, a charge Israel denied.

Eldad then claimed that at this stage:

Israel was quick and willing to activate its diplomatic tools, and perhaps even greater means, to bring Abdel Fattah Al-Sisi to power in Egypt, and convince the then-U.S. administration under President Barack Obama not to oppose this move.”

Events at the time support Eldad’s claim as, shortly after the coup, Israel quickly launched diplomatic missions in the U.S. and several European countries to push for support of Egypt’s new political reality and to prevent a diplomatic blockade on Cairo following the military coup. Many analysts have noted that under Al-Sisi, Egypt-Israel relations have grown to unprecedented levels through policies often driven by Al-Sisi himself.

Why Israel wanted Morsi out

While Eldad cited concerns over a rupture of the Israel-Egypt peace agreement as having motivated Israel’s role in the 2013 coup, a more likely reason was related to Morsi’s relationship with Hamas and efforts to normalize relations with Gaza.

Notably, after Al-Sisi came to power, the Rafah crossing between Gaza and Egypt and tunnels between Gaza and Egypt were abruptly closed. In addition, soon after the coup, “army-instigated anti-Palestinian propaganda” was “rampant” throughout Cairo and Palestinians that had flown into the Cairo airport were quickly deported back to the countries they had recently arrived from, according to The Guardian. In contrast, while Morsi did not end the blockade of Gaza — in force since 2007 — he had improved conditions for Palestinians living in the embattled enclave compared to those under his predecessor, Hosni Mubarak.

Eldad, in his article, hinted that the coup was related to a “religious war” that Israel was and still is fighting against Palestine and Arab majority nations, stating:

Contrary to all Israeli expectations, the Camp David agreement, which was made 40 years ago, has lasted for many decades despite the lack of real peace between us and the Egyptians, and despite the failure to resolve the Palestinian-Israeli conflict, because this conflict is not just geopolitical. We are rather having a religious war with the Palestinians and Arabs.”

Though Eldad’s recent statements make the connection between Morsi’s relationship with Hamas and Israeli involvement in the 2013 coup more clear, it had long been suspected. An Egyptian army general told BBC soon after the coup that Morsi’s alleged “collaboration” and good relations with Hamas were a driving factor behind the coup.

In a telling incident, Morsi was later charged with terrorism for allegedly conspiring with Hamas, Hezbollah, and elements of the Iranian military to “destabilize” Egypt. Morsi has been imprisoned for years, many of them spent in solitary confinement, and a U.K. panel of legal experts asserted last year that harsh prison conditions will likely lead to his “premature death.” Prior to being charged for “collaborating” with Hamas, Morsi had publicly praised Palestinian “resistance” in Gaza. Another likely factor for Israel’s decision to place Al-Sisi in power was Morsi’s efforts to normalize relations with Iran.

The accusations against Morsi regarding alleged collaboration with Hezbollah and Iran, both adversaries of Israel, seemed unusual to some, given that Morsi had, during his time in office and during the alleged “conspiracy,” cut ties with Syrian President Bashar al-Assad and supported Assad’s overthrow by opposition forces. Hezbollah and Iran, in contrast, supported Assad and fought alongside the Syrian Army. Notably, Israel served as one of the “masterminds” behind the Syrian conflict, which Morsi supported. Hamas, like Morsi’s government, had also backed efforts to oust Assad at the time, albeit less publicly.

Notably, Al-Sisi’s government, widely considered a military dictatorship despite a pale sheen of democracy, has forged increasingly close ties with Israel ever since he came to power in the 2013 coup. This is unsurprising given Eldad’s recent claim that Israel had orchestrated the coup in order to put Al-Sisi in power. During his time in control of the country, Israel and Egypt began “secretly” coordinating military actions in Egypt, a covert alliance that Al-Sisi had denied until this January, when he admitted far-reaching coordination between the IDF and the Egyptian military.

Al-Sisi’s efforts to bring Egypt closer to Israel lack popular support, as most trade unions and political parties oppose normalizing relations with Israel. However, Al-Sisi — known for his brutal repression of protests, journalism and any form of dissent — has continued to push forward in his efforts to forge closer ties with Israel, in apparent service to the country largely responsible for his rise to power.