You Are Here: Home → There’s Something Rotten in Virginia: Israel Is a Malignant Force in Local Politics

There’s Something Rotten in Virginia: Israel Is a Malignant Force in Local Politics 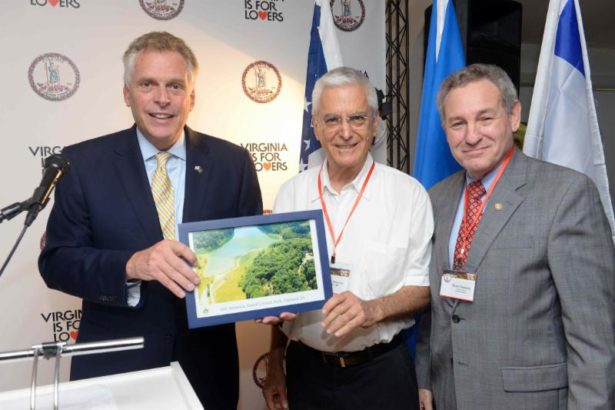 Among the many state and local orgs that work in the shadows for Israel is the Virginia-Israel Advisory Board (VIAB), funded by Virginia taxpayers. VIAB’s main objective is to provide preferential and unconditional funding to oftentimes secretive Israeli business projects designed to entwine Israeli industries into Virginia industries and government. VIAB is currently being scrutinized by the state Attorney General over its handling of government funds.

One of the more interesting aspects of the relentless march of the Israel Lobby in the United States is the extent to which it has expanded its reach down into the state and even local level. Previously, the American Israel Public Affairs Committee (AIPAC) and the hundreds of other Jewish and Christian Zionist organizations dedicated to promoting Israeli interests had concentrated on the federal government level and the media, believing correctly that those were the key players in benefiting Israel while also making sure that its public image was highly favorable. The media was the easy part as American Jews were already well placed in the industry and inclined to be helpful. It also turned out that many Congressmen and the political parties themselves had their hands out and were just waiting to be bought, so “Mission Accomplished” turned out to be a lot easier than had been anticipated.

But amidst all the success, the Israeli government and its diaspora supporters discovered that it was receiving a lot of unwelcome publicity from an essentially grassroots movement that went by the label “Boycott, Divest and Sanctions” or BDS. BDS was strong on American campuses and its appeal as a non-violent tool meant that it was growing, to include many young Jews disenchanted with the Prime Minister Benjamin Netanyahu version of the Jewish state.

Israel works hard to influence the United States at all levels and is generally very successful, but it seemed a stretch to try to pass legislation banning a non-violent movement at a national level so it focused on the states, where legislators would presumably be less concerned over the Bill of Rights. It mobilized its diaspora resources to focus on elections at local and state government levels where Jewish constituents were active in interviewing candidates regarding their views on the Middle East. Candidates understood very well what was happening and also appreciated that their answers could determine what level of donations and the kind of press coverage they might receive in return.

Put together enough intimidated legislators in that fashion and you eventually will have a majority willing to pass legislation blocking or even criminalizing the BDS movement while also granting special benefits to Israel. As of this writing, there is anti-BDS legislation in 27 states, some of which denies state services or jobs to anyone who does not sign an agreement to not boycott Israel. Particularly draconian bills currently advancing in Florida equate any criticism of Israel with anti-Semitism, explicitly define Israel as a Jewish state and also enable anyone who says otherwise to be sued.

Another blatant propaganda program that is being used with congressmen, as well as state and local officials plus spouses, is the sponsorship of free “educational” trips to Israel. The trips are carefully coordinated with the Israeli government and many of them are both organized and paid for by an affiliate of the American Israel Public Affairs Committee called the American Israel Education Foundation (AIEF).  There are also other trips sponsored by AIEF as well as by regional Jewish organizations that particularly focus on politicians at state and even local levels as well as journalists who write about foreign policy.

Everyone is expected to return from the carefully choreographed trips singing the praises of the wonderful little democracy in the Middle East, and many of the travelers do exactly that. The pro-Israel sentiment is buttressed by the activity of the state and local diaspora Jewish groups, which tend to be very politically active and generous with their political contributions.

This coziness often borders on corruption and inevitably leads to abuses that do not serve the public interest, particularly as American citizens are quite openly promoting the interests of a foreign nation. An interesting example of how this works and the abuse that it can produce has recently surfaced in Virginia, where a so-called Virginia-Israel Advisory Board (VIAB) has actually been funded by the Commonwealth of Virginia taxpayers to promote and even subsidize Israeli business in the state, business that currently runs an estimated $500 million per annum in favor of Israel.

Grant Smith’s Institute for Research: Middle Eastern Policy (IRMEP) has done considerable digging into the affairs of VIAB, which was ostensibly “created to foster closer economic integration between the United States and Israel while supporting the Israeli government’s policy agenda” with a charter defining its role as “advis[ing] the Governor on ways to improve economic and cultural links between the Commonwealth and the State of Israel, with a focus on the areas of commerce and trade, art and education, and general government.” Smith has observed that “VIAB is a pilot for how Israel can quietly obtain taxpayer funding and official status for networked entities that advance Israel from within key state governments.”

Documents released under Virginia’s Freedom of Information Act indicate that not only does VIAB not create opportunities for Virginians, it also is active in working against the BDS movement. According to the documents, VIAB, which avoids any public disclosure of its activities, is currently also being scrutinized by the state Attorney General over its handling of government funds.

VIAB was founded in 2001 but it grew significantly under governor Terry McAuliffe’s administration (2014-2018). McAuliffe, regarded by many as the Clintons’ “bag man,” received what were regarded as generous out-of-state campaign contributors from actively pro-Israeli billionaires Haim Saban and J.B. Pritzker, who were both affiliated with the Democratic Party. McAuliffe met regularly in off-the-record “no press allowed” sessions with Israel advocacy groups and spoke about “the Virginia Advisory Board and its successes.”

The Virginia Coalition for Human Rights (VCHR) reports that VIAB is “the only Israel business promotion entity in the United States embedded within a state government and funded entirely by the state’s taxpayers. In terms of the overall state budget, VIAB’s direct share is small ($209,068 for fiscal years 2017 and 2018). However, VIAB’s diversion of state, federal and private grants, as well as demands on state-funded entities like colleges and universities to collaborate in projects designed primarily to benefit Israel, run in the millions of dollars per year. VIAB’s main objective is to provide preferential and unconditional funding to oftentimes secretive Israeli business projects designed to entwine Israeli industries into Virginia industries and government. VIAB seeks to transcend warranted, growing and legitimate American grassroots concerns about human rights in Israel-Palestine by pressuring state lawmakers and the local business community into providing unconditional support and developing a long-term ‘stake’ in Israel.”

Per VCHR, documents released under the Freedom of Information Act found that VIAB, among other suspect practices, had “Provided reports of success that the office of the Governor found to be “inflated without merit.” VCHR concluded that “there should be no preferential and unconditional Commonwealth of Virginia support for Israeli business projects for four key concerns: moral, economic, good governance and state public opinion.” Moral was due to Israel’s “dismal human rights record,” economic because Virginia has a half-billion dollar trade deficit with Israel, good governance because VIAB’s board and leadership are drawn from the “Israel advocacy ecosystem,” and public opinion because opinion polls suggest that over one third of Virginians favor halting all funding for “Israeli business ventures.”

On a similar issue a shadowy group called the Institute for Curriculum Services (ICS), which is actually a “partisan group with backing by state and local Israel advocacy organizations,” is seeking to change the information conveyed by the history and social studies textbooks used in K-12 classrooms across Virginia. ICS recommended changes include: “1. Emphasizing Arab culpability for crisis initiation leading to military action and failure of peace efforts—and never Israeli culpability, even when it is undisputed historic fact. 2. Replacing the commonly used words of “settlers” with “communities,” “occupation” with “control of,” “wall” with “security fence,” and “militant” with “terrorist.” 3. Referencing Israeli claims such as “Israel annexed East Jerusalem” and the Golan Heights as accepted facts without referencing lack of official recognition by the United Nations and most member nation states.”

The activity of the VIAB is little more than robbery of Virginia state resources being run by mostly local American Jews to benefit their co-religionists in Israel. What is significant is that the theft from the American taxpayer, having long occurred at the federal treasury level, now extends down to state and local jurisdictions. And the ICS is yet one more example of attempted Israeli brainwashing of the American public on behalf of the Jewish state to completely alter the narrative about what is going on in the Middle East. Will it ever end? Perhaps, but only when the American people finally wake up to what is being done to them and by whom.