You Are Here: Home → Trump made snap decision on Golan after “quickie” history lesson

Trump made snap decision on Golan after “quickie” history lesson 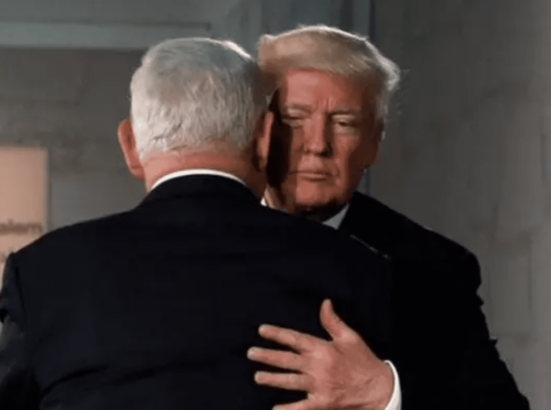 President tells Jewish GOP confab that recognition, upending US policy, was made during a ‘quickie’ briefing; says David Friedman reacted ‘like a wonderful, beautiful baby’

[Editor’s note: While Benjamin Netanyahu has claimed that the Golan Heights “belongs to us [because] we won it in a just war of self-defense,” Israeli and American legal experts have almost unanimously dismissed their assertion, arguing that states cannot permanently seize another country’s territory, even in alleged or actual “defensive” wars. Israeli historians indicate that from the birth of the State, its leaders have coveted the Golan, and have provoked conflict there.

The US has persistently refused to recognize Israel’s annexation of the Golan – until now – and has considered settlements in that region illegal under international law.]

President Donald Trump’s decision that he announced in a tweet last month to recognize Israeli sovereignty over the disputed Golan Heights territory marked a dramatic shift in decades of U.S. policy. And he revealed on Saturday that the controversial move was made quickly — after he’d received a “little history” lesson from his advisors.

Trump told a gathering of the Republican Jewish Coalition that he’d been speaking to his son-in-law and senior advisor, Jared Kushner, as well as U.S. ambassador to Israel David Friedman and his Israel adviser, Jason Greenblatt, over the phone about an unrelated issue when he suddenly brought up the Golan Heights, The Times of Israel reported.

“I said, ‘Fellows, do me a favor. Give me a little history, quick. Want to go fast. I got a lot of things I’m working on: China, North Korea. Give me a quickie,’” Trump recalled of the conversation.

After the advisers filled him in, Trump said he asked Friedman: “David, what do you think about me recognizing Israel and the Golan Heights?”

Friedman, apparently surprised by the suggestion, reacted like a “wonderful, beautiful baby,” Trump said, and asked if he would “really … do that.”

“Yeah, I think I’m doing it right now. Let’s write something up,” Trump said he responded, prompting applause and cheers from his audience in Las Vegas. “We make fast decisions and we make good decisions.”

Trump did not reveal when the phone call with his advisers took place.

He tweeted about his Golan Heights decision on March 21, days before making it official with a proclamation signed during Israeli Prime Minister Benjamin Netanyahu’s visit to the White House.

As NPR noted, the proclamation was a departure from more than 50 years of U.S. policy and a deviation from the position held by most in the international community, which views the Golan Heights ― captured by Israel during the 1967 Six-Day War with several Arab nations and annexed more than a decade later ― as an occupied territory.

The policy shift has been characterized as the most overt step taken by Trump to support Netanyahu, who has been dogged by allegations of corruption and faces a closely contested election this week.

On Saturday, Netanyahu vowed that if re-elected, he would annex Jewish settlements in the occupied West Bank, which is home to almost three million Palestinians who consider the area the heartland of any Palestinian state.

Reacting to Netanyahu’s pledge, a senior Palestinian official blamed the Trump administration and others in the international community for emboldening Israel to “brazenly violate international law.”

“Israel will continue to brazenly violate international law for as long as the international community will continue to reward Israel with impunity, particularly with the Trump administration’s support and endorsement of Israel’s violation of the national and human rights of the people of Palestine,” Saeb Erekat said in a statement, per Reuters.

In his address to the Republican Jewish Coalition, Trump referred to Netanyahu as “your prime minister.” His choice of words was lambasted by the nonpartisan American Jewish Committee, which reminded the president that he was speaking to a group of Americans.

Dominique Mosbergen is a senior reporter at HuffPost covering trends and breaking news.

Action Alert: Tell Congress Golan does not belong to Israel