You Are Here: Home → Pro-Israel organizations in the US facilitated Israeli agreements with UAE, Bahrain 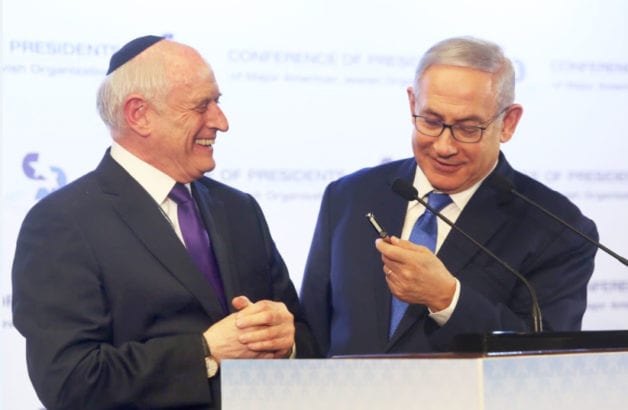 Chairman of the Conference of Presidents of Jewish Organizations Malcolm Hoenlein with Prime Minister Benjamin Netanyahu at a Jerusalem conference on US-Israeli Jewish relations earlier this year. (Jerusalem Post)

The Conference of Presidents of Major Jewish Organizations, the American Jewish Committee, and the World Jewish Congress worked for 25 years to procure the agreements.

UAE and Bahrain had previously refused to have diplomatic relations with Israel because of Israel’s massive ethnic cleansing against the indigenous population of a region that had been called Palestine for millenia, before being taken over and renamed Israel.

Jared Kushner and Haim Saban also had key roles in the deal.

Israel’s Jerusalem Post newspaper reports that the Israel lobby in the US played a significant role in the “normalization” agreements between Israel and the United Arab Emirates and Bahrain.

Previously, both countries had refused to have diplomatic relations with Israel due to its establishment through a war of ethnic cleansing against Palestinian Christians and Muslims. Israel continues to discriminate against non-Jews and has a long record of human rights abuses.

JP reports that private diplomacy conducted by the Conference of Presidents of Major Jewish Organizations, the American Jewish Committee, and the World Jewish Congress “played a large role in laying the groundwork for these recent developments.”

Longtime senior official of the Conference of Presidents and current vice chair Malcolm Hoenlein told JP that the organization “began its outreach to the countries of the Persian Gulf a quarter of a century ago.”

Hoenlein said that over the years the organization has also been sending delegations and promoting ties with Qatar, Saudi Arabia “and beyond.”

Hoenlein told JP that he and the delegations met with regional leaders and promoted the idea that Iran and Turkey were threats to both Israel and the Gulf states.

“Each step contributes, it’s like building blocks. The US, Netanyahu, the Bahrain and UAE governments get the credit for these agreements, but the ties and relationships that were made were very important,” said Hoenlein.

“I believe strongly in private diplomacy if it remains private because it gives you credibility. It builds bridges of trust, and shows people the value of a relationship with Israel, not just as a way-station to get to Washington, or against Iran, but for business, for medicine and for every field of endeavor.”

According to JP, the American Jewish Committee also began its outreach to the Gulf Arab countries 25 years ago. It reports: “Jason Isaacson, AJC’s chief policy and political affairs officer, began leading outreach to these Arab countries in the early 1990s, with the purpose of cultivating relationships and mutual confidence.

Isaacson told JP: “Our intention all along has been to relieve individuals in the region of misconceptions about the Jewish people, and counter the conspiracy theories and propaganda that has polluted minds in the Arab world for decades.”

“And we were also able to talk about the opportunities and benefits of engagement with the wider world and the Jewish community on the diplomatic, economic, and academic fronts.”

According to the JP report: “Isaacson said that the AJC had facilitated the introduction of business leaders in the Gulf and Israel, helped facilitate the adoption of some Israeli technology and forge cooperative endeavors such as the Middle East Desalination Research Center in Muscat, Oman.

“The organization also helped promote free trade agreements between the US and the UAE, Bahrain and Oman.

“It’s about building trust, proving that the promise of benefits can be realized, and build momentum for peace and cooperation and demonstrating that Israel can be a valuable partner beyond just the security dimension.” Many in the region believe the Israel lobby is key to US Middle East policies.

JP stated: “Hoenlein said that he hoped the two recent agreements will pave the way for further developments, such as the recent Saudi agreement to open its skies to Israeli commercial overflights, and further economic cooperation with Israel and the Gulf states, as well other Arab and Muslim countries beyond.”

Some reports state that Jared Kushner’s close ties to Israel and the pro-Israel lobby in the US played a key role in the recognition. (Kushner’s family has close ties to Conference chair Arthur Stark.)

It appears that the US promised to sell the UAE F-35s to obtain the deal (which is being opposed by the Democratic Party portion of the lobby). It is unknown what inducements were offered to Bahrain since details of both deals are being kept secret.

Israel’s agreements decades ago with Egypt and Jordan were procured with large aid packages from the US that continue to this day. US expenditures on behalf of Israel amount to at least $19 million per day.

Kushner now suggests that other Arab states could follow quickly. Reuters reports: “Asked when the next would normalise ties with Israel, he was quoted as saying: ‘Let’s hope it’s months.'”

There have been recent reports that some pro-Israel organizations in the US have been breaking the law through secretly using Israeli governmental funding to influence US policies. It’s unknown whether groups involved in the recent deals were involved.