You Are Here: Home → Three Palestinians and three Israelis killed in spate of deadly incidents 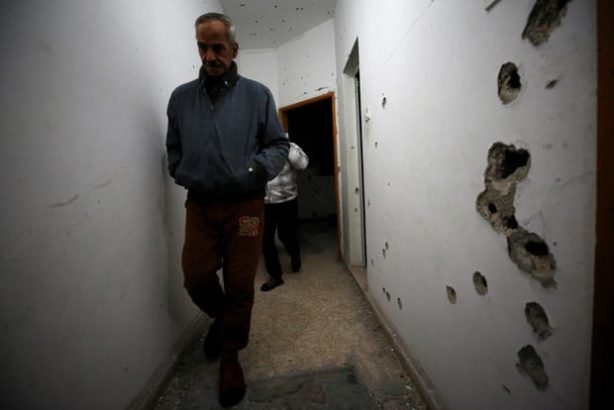 Man walks in a damaged house where a Palestinian gunman was killed by Israeli troops, near Nablus in the Israeli-occupied West Bank (Reuters)

The Israeli military has recently been conducting aggressive operations inside the occupied Palestinian West Bank, including in Area A, where the Palestinian Authority is supposed to be in full control.

Israel continues to prolong and entrench the now 50+-year occupation, citing the need for security; in reality the occupation and its injustice are the cause of Palestinian resistance, not the result of Palestinian violence.

A spate of shootings over the past 12 hours, in which three Palestinians and two Israelis have been killed in four separate incidents, has raised tensions in the occupied West Bank and East Jerusalem.

Since Wednesday night, the incidents have included:

The spike in deadly violence comes with tensions already running high over the Ofra settlement shooting and the killing of two more Palestinians by Israeli troops.

Late on Wednesday night, Israeli troops shot and killed a Palestinian man driving his taxi near the village of Surda in the central West Bank.

Israeli security agency Shin Bet said soldiers had tried to arrest the man – whom they suspected of being responsible for a drive-by shooting near the Israeli settlement of Ofra on Sunday – but shot him dead when he tried to escape.

Palestinian reports identified the man killed as 29-year-old Saleh Omar al-Barghouthi, from the village of Kobar.

Muqbil Barghouthi, a relative of Saleh’s, told Middle East Eye that witnesses had seen a van with Palestinian license plates following Saleh’s taxi and that he had been shot at without warning, leading them to believe he was being targeted by undercover Israeli forces.

“They saw the soldiers take Saleh out of the car, and the witnesses said that he wasn’t injured and had not been shot,” Muqbil Barghouthi said.

“He was fine when they arrested him, the people didn’t see any blood. We believe he was taken to another area and extra-judicially executed.”

Muqbil Barghouthi added that Israeli forces later raided Surda, the village Barghouthi is from, and shot at the crowd that had gathered outside the Barghouthi family home, injuring at least three people. Barghouthi’s father and brothers were reportedly detained.

Saleh’s relative added that his family did not believe he was involved in the drive-by shooting that had led to him being targeted.

“The Israelis say he carried out the shooting attack near Ofra last week so this is why they attacked him, but we don’t believe he was involved,” the relative said.

“If he was involved he would have gone into hiding. But he was at home normally going to work normally, nothing was strange about him or his activities.”

A few hours later, Ashraf Naalwa, a Palestinian who was named by the Israeli army as a suspect of murdering two Israelis at the recycling centre where he worked in the Barkan industrial zone of the West Bank, was killed after a two-month manhunt.

The 23-year old’s death came in the early hours of Thursday morning after Israeli forces tried to arrest him, the Shin Bet said in a statement while claiming Naalwa was planning a new attack.

Israeli security forces have been searching Naalwa for the past 73 days, with the PA’s assistance.

The house where Naalwa was killed, located in the northern West Bank refugee camp of Askar, was peppered with bullet holes after the operation, an AFP journalist at the scene said.

Responding to the deaths of Barghouthi and Naalwa, the Hamas movement said in a statement that “the fire of resistance in the West Bank will not die until the occupation is lifted”.

“Hamas and the other resistance factions will continue to support activity to avenge their death”, the statement added.

The two officers wounded were not in life-threatening condition, a police spokesman said, adding that shortly before being killed, the Palestinian had attempted to stab a civilian.

The Palestinian news agency quoted witnesses as saying that Mteir was shot 10 to 12 times and left lying on the ground bleeding for 40 minutes before he died.

A trail of dead

In the wake of a deadly night, at about 11am on Thursday, four Israelis in their 20s were shot outside the illegal settlement outpost of Givat Asaf in the central West Bank.

Magen David Adom, Israel’s emergency medical organisation, reported that two of the Israelis were killed and two seriously injured. One of those injured has now died. The assailant fled the scene after the attack.

This night of attacks comes at a particularly bad time.

The drive-by shooting at the Ofra settlement has prompted outrage in Israel, as a number of political figures have called for the official state recognition of the entire settlement – including parts built on private Palestinian land – in retaliation for the attack. All settlements are deemed illegal under international law.

In this atmosphere, a number of killings took place before the night that saw three Palestinians and three Israelis killed.

On 4 December, Mohammed Ihbali, 22, was shot in the head and killed during an overnight army raid in the Palestinian city of Tulkarem.

Israeli human rights organisation B’Tselem released security camera footage that it said proved Israeli forces were not under threat when they shot and killed Ihbali, who was mentally challenged.