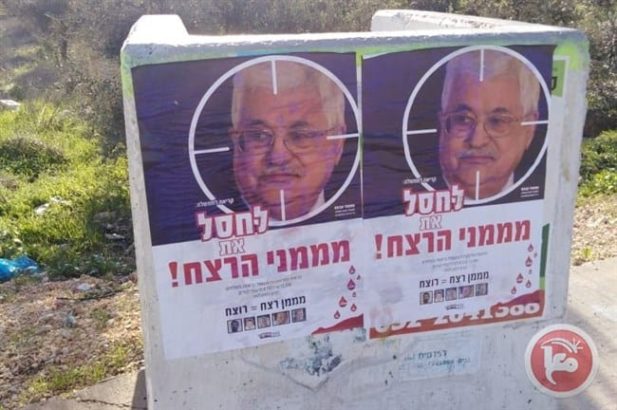 Ramallah, the Palestinian Authority’s capital, has been subject to raids allegedly in search of the perpetrator of a drive-by shooting of Israeli settlers yesterday. Now some settlers are calling for the PA president’s assassination – and Israeli soldiers are staying silent.

Israeli extreme Jewish groups hung posters of the Palestinian President Mahmoud Abbas at the Huwwara crossroads in southern Nablus, in the northern occupied West Bank, on Tuesday, calling for his assassination.

Locals reported that the Israeli army, deployed in the area, did not remove these posters.The posters read “supporter of terrorists” and called for killing (assassinating) the Palestinian President.

The incident comes as member of the Likud party at the Israeli Knesset, Oren Hazan, had called for imposing closure on the Ramallah and al-Bireh district until the suspect of an attack carried out in the Ofra illegal Israeli settlement, two days ago, is detained.

Seven Israeli settlers were injured in the attack.

Israeli forces had raided Ramallah, on Monday, and were deployed just meters away from the Palestinian President’s house.