You Are Here: Home → The United Nations is anti-injustice, not anti-Semitic 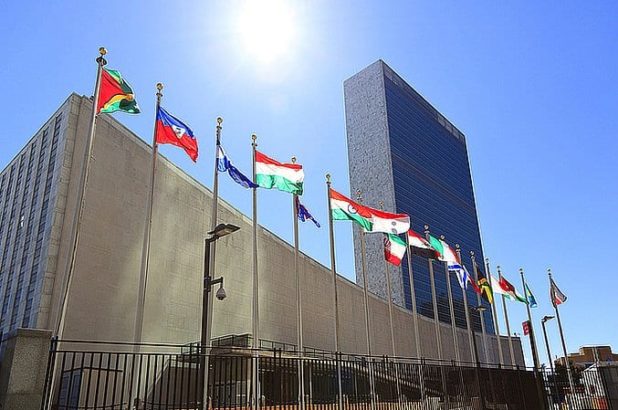 On Wednesday September 30, 2015 at 1:16 pm, the Palestinian flag was raised outside the headquarters of the United Nations in New York for the first time.

A United Nations committee is directed to facilitate self-determination among colonized and suppressed people groups. The committee is poised to pass 9 resolutions against Israel. Predictably, the charge of anti-Semitism arises.

It is not hard to dismantle the accusation – using context, fact-checking, and a bit of logic.

In Boston, a billboard honoring first responders in Gaza who lost their lives, was taken down when the billboard company staff started receiving phone calls started coming in calling them terrorists and anti-Semites.“anti-Semitic.”

In Britain, Labor Party leader Jeremy Corbyn, an outspoken critic of Israel, is on the receiving end of a smear campaign that is all about anti-Semitism.

When President Trump’s son Eric recently used the word “shekels” in a comment about journalist Bob Woodward, it was called by some “an anti-Semitic dog whistle”; some speculated that the whole Trump family might be anti-Semitic.

A math teacher in Kansas was asked to sign a form certifying that she was “not currently engaged in a boycott of Israel” in order to be contracted by the state to train other math teachers. She couldn’t sign because she was in fact boycotting Israel. State law forbade her from getting the job.

A nationwide bill in Congress would similarly criminalize boycotts or criticism of Israel, with a maximum fine of $1 million and a 20-year prison sentence. As The Forward explains, “the argument that BDS is hate speech and, at its very core, anti-Semitic stems from the movement’s support of the Palestinian right of return, which [Anti-Defamation League director Abe] Foxman describes as ‘the destruction of the Jewish state through demography.’

When at the close of his presidency, President Obama directed US ambassador to the UN Samantha Powers to abstain from voting in support of Israeli settlement-building on Palestinian land, that move was dubbed “the most anti-Semitic act of 2016” by the Simon Wiesenthal Center.

Now – or rather, again – the United Nations itself is being accused of anti-Semitism because it dares to criticize Israeli policies.

Israel self-identifies as “the Jewish State” (much to the displeasure of the 20% of the population who are non-Jewish). It seems to follow that if the State is Jewish, then criticism of the State is criticism of Jews. Hence the label “anti-Semitic.”

What the UN is up to

UN Watch, which is dedicated to finding anti-Semitism in the United Nations, announced Friday,

A United Nations General Assembly committee is set to adopt nine resolutions against Israel tomorrow, and zero on the entire rest of the world.

Before we panic, let us do a little research. For starters, what is this “committee”?

It’s called the Special Political and Decolonization Committee (aka the Fourth Committee), and its job is specifically to address those parts of the world where colonization still exists – and to work toward self-determination for those peoples.

H.E. Mrs. María Fernanda Espinosa Garcés, President of the 73rd Session of the UN General Assembly, put it this way: “We have a commitment to ensure the full independence of all colonial countries and peoples, and this commitment – a clear objective of the UN Charter – must be recognized and achieved.”

Since the creation of the Fourth Committee in 1962, over 80 colonized territories have obtained their freedom, and only about 17 remain. Palestine is not on that list of 17 – presumably because it is not “colonized” in the traditional sense, but rather occupied – but Israel has denied the Palestinian people self-determination. The Committee wants to fulfill the vision of the UN Charter for these people.

The complaint, the context

Hillel Neuer, executive director of UN Watch, is horrified by the “torrent of one-sided resolutions” against Israel.

He fumed, “Days after the Hamas terrorist group assaulted Israeli civilians with a barrage of 460 rockets — while the UN’s General Assembly and Human Rights Council stayed silent — the world body now adds insult to injury by adopting nine lopsided condemnations, whose only purpose is to demonize the Jewish state.”

Context, please? Israel accuses Hamas of shooting “a barrage” of rockets at civilians. Why would Hamas do that? Because Hamas is anti-Semitic? No.

The rocket attack came because:

Rocket-launching may not be the ideal response to Israel’s actions, but Israel and its supporters must acknowledge this context and the predictable anger of the Palestinian people.

We might all ask the question, what should Palestinians do instead of launching rockets? Be more quiet and orderly in their protests? – It’s easy for a privileged Israel ally who has not spent years under blockade to suggest this, and such a protest would accomplish nothing. Get rid of Hamas? – Gazans elected Hamas to lead a resistance against Israel’s illegal actions. Rarely-fatal rockets and stones are Gaza’s answer to snipers, warplanes, drones, and tanks.

The people of Gaza are fighting for their lives. Full stop.

“What about those other guys?”

UN Watch director Hillel Neuer complained further that EU states, which were expected to support most of the resolutions against Israel, “have failed to introduce a single UNGA resolution on the human rights situation in China, Venezuela, Saudi Arabia, Belarus, Cuba, Turkey, Pakistan, Vietnam, Algeria, or on 175 other countries.”

The “he did it too” argument is a bit embarrassing, especially considering that the UN has indeed criticized China, Venezuela, Saudi Arabia, Belarus, Cuba, Turkey, Pakistan, Vietnam, Algeria, and other countries.

Neuer complained further that one of the resolutions condemns Israel for its ongoing encroachment on the Golan Heights, and calls for Israel to return the land and its people to Syria.

His rebuttal – “After the Syrian regime has killed half a million of its own people, how can the UN call for more people to be handed over to Assad’s rule?” – suggests that Israel should keep illegally occupied Syrian land – with Syrian people on it – because Israel is a better overlord.

And there’s this comment: “[The] resolutions claim to care about Palestinians, yet the UN is oblivious to the dozens of Palestinians who have been slaughtered, maimed and expelled by Assad’s forces, and more than 3,000 victims killed since 2011.”

This begs the question, what are Palestinians doing in Syria? Answer: they are refugees from Israel’s ethnic cleansing operations in 1948 and 1967. Context, Mr. Neuer.

Neuer persisted, “the UN’s automatic majority has no interest in truly helping Palestinians, nor in protecting anyone’s human rights; the goal of these ritual, one-sided condemnations is to scapegoat Israel.”

This is an interesting conclusion, as most of the specific demands the UN has made are in the direct interest of Palestinian safety and human rights. Just a few examples:

And on and on it goes.

The large number of resolutions against Israel is partly due to Israel’s refusal to comply with UN demands, making it necessary to repeat them. Thus we find

In addition, the UN found it necessary in 1967 to create the Special Committee to Investigate Israeli Practices Affecting the Human Rights of the Population of the Occupied Territories, which reports yearly on Israel’s abuses – not because the committee is anti-Semitic, but because Palestinian human rights abuses have not abated.

According to Committee meeting coverage, the representative from Israel had a few choice words for the body, in which he blamed “Arab” threats and aggression for the failure to achieve peace.

Additionally, he criticized the UN for bullying the “Jewish State,” made inaccurate statements about Palestinian refugee status, and pointed out the body’s failure to sanction Hamas. 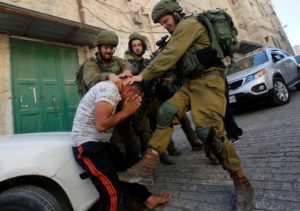 Israel and its fan club seem bent on ignoring inconvenient truths, choosing instead to deflect attention from Israel’s transgressions by accusing nearly the whole world of using Palestinian human rights as a pawn to bully the Jewish State.

150 or more countries voted in favor of most the resolutions against Israel.

And that brings us back around to anti-Semitism.

This country identifies as Jewish, and is called to account for its myriad, well-documented human rights abuses. Instead of correcting its faults – or defending its innocence – it concludes that anti-Semitism is the problem.

Condemnation of Israel in the UN is happening because Israel is guilty. If the occupation and the wall and the human rights abuses end, so will the UN resolutions.

It’s time to get real, starting with Israel’s advocates: instead of blaming the world for picking on the Jewish State, take a good, hard, contextualized look at Israel’s actions and condemn them, instead of propping up bad behavior. 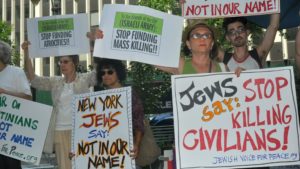