You Are Here: Home → Naftali Bennett: “the state of Israel stopped winning” 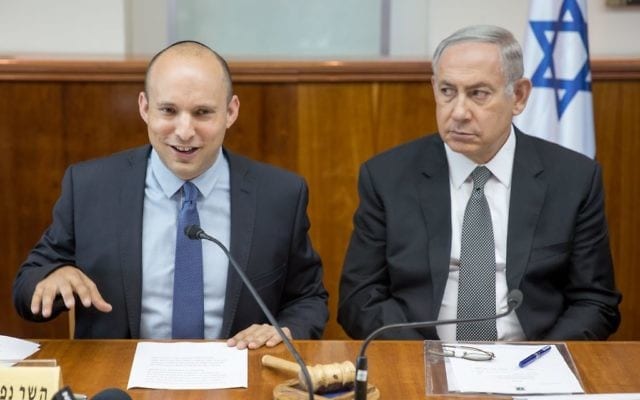 Two right-wing ministers criticize Israeli Prime Minister Benjamin Netanyahu for not “acting like a real right-wing government” by being too soft on Gaza, Hamas, and Khan al-Ahmar; but they vow to stay in power rather than resigning as Defense Minister Avigdor Lieberman did last week.

Israeli Education Minister Naftali Bennett has said he will keep his party in government, making an early election less likely.

In a dramatic press conference on Monday, Bennett, who heads the far-right, pro-settler Jewish Home party, slammed the record of Israeli Prime Minister Benjamin Netanyahu, but stopped short of resigning.

“Something bad is happening to us from within,” said Bennett. “For quite a few years, including the last decade of the government headed by Netanyahu, that the state of Israel stopped winning.”

“I tell the prime minister here: we are withdrawing right now all of our political demands and will stand to help you in this great mission of getting Israel to win again,” he said.

“If the government would really start leading toward the right path, acting like a real right-wing government, it’s worth trying,” he added. “The ball is in the prime minister’s court.”

Bennett had last week threatened to withdraw from the coalition to protest a ceasefire in Gaza agreed between Israel and Hamas-led factions on Tuesday.

Many people had expected Bennett to announce his resignation on Monday, rather than criticise Netanyahu, she added.

“He criticised, extensively, Prime minister Benjamin Netanyahu,” said Dekker. “Particularly how he dealt with the issue with the Palestinians, whether it came to prisoner exchanges, or how he handled the Gaza border protests, how he handled Hamas, how he hadn’t yet demolished Khan al-Ahmar, the village in the occupied West Bank.”

“But after all that criticism, he said, ‘well, I am going to remain in government.’ He doesn’t want to be seen… as the one to bring down the right-wing government.

“Also, of course, it would have been handing a massive political victory to Hamas, in the aftermath of that ceasefire. First with the resignation of the defence minister and then with the potential fall of the government,” she said.

Last week, Bennett and Justice Minister Ayelet Shaked had threatened to withdraw from the government coalition if Bennett wasn’t named defence minister, in the wake of Avigdor Lieberman’s resignation.

Netanyahu subsequently said he would take on the defence portfolio himself.

In a televised address on Sunday, the prime minister said “there is no place for politics or personal considerations” when it comes to Israel’s security.

He also urged his coalition partners not to bring down the government, saying holding snap elections now would be “irresponsible” as Israel is in “one of our most complex periods in terms of security”.

Following the address, Jewish Home described the government as “nominally right-wing” and accused it of being weak on security issues in a statement.

Netanyahu’s meeting on Sunday with Finance Minister Moshe Kahlon, a key coalition partner who has also pushed for early elections, was seen as a last attempt to prevent the collapse of the coalition – which currently has a one-seat majority in parliament – but ended with no conclusion.

Many viewed Netanyahu’s speech, in which he denounced those threatening to resign, to be the start of the election campaign.