You Are Here: Home → UN Special Rapporteurs to Israel: 60 days to respond to ‘deep concerns’ re Jewish Nation-State Law 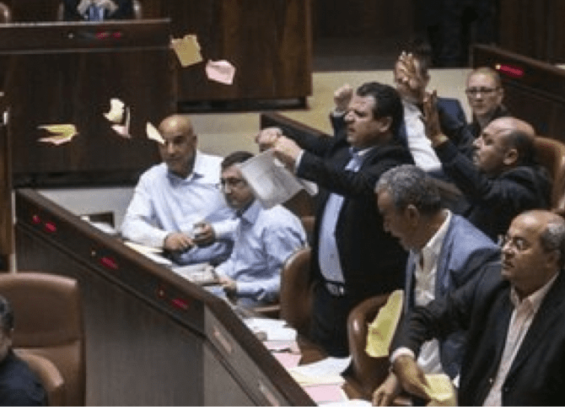 As soon as the Nation-State Law was passed in the Knesset (Israeli legislature), Palestinian-Israeli lawmakers “tore copies in protest, and were subsequently removed from the Knesset plenum hall.”

Four Special Rapporteurs express ‘deep concern’ that Nation-State Law is ‘discriminatory in nature and in practice against non-Jewish citizens and other minorities and does not apply the principle of equality between citizens, which is one of the key principles for democratic political systems,’ and gives Israel 60 days to explain itself.

Following a special request for action issued by Adalah – The Legal Center for Arab Minority Rights in Israel, four United Nations special rapporteurs have given Israel a 60-day deadline to respond to their grave concerns regarding the Jewish Nation-State Law, adopted by the Knesset on 19 July 2018.

The 60-day period began on 2 November 2018 when UN Special Rapporteur in the field of cultural rights Karima Bennoune, Special Rapporteur on the situation of human rights in the Palestinian territories occupied since 1967 Michael Lynk, Special Rapporteur on minority issues Fernand de Varennes, and Special Rapporteur on contemporary forms of racism, racial discrimination, xenophobia and related intolerance E. Tendayi Achiume sent a communique to Israeli authorities expressing their deep concerns regarding the impact of the new law.In their letter, the special rapporteurs expressed “deep concern” that the Israeli Basic Law appears “to be discriminatory in nature and in practice against non-Jewish citizens and other minorities and does not apply the principle of equality between citizens, which is one of the key principles for democratic political systems.”