You Are Here: Home → Attending school while Palestinian: brief (horror) stories from the last 6 weeks 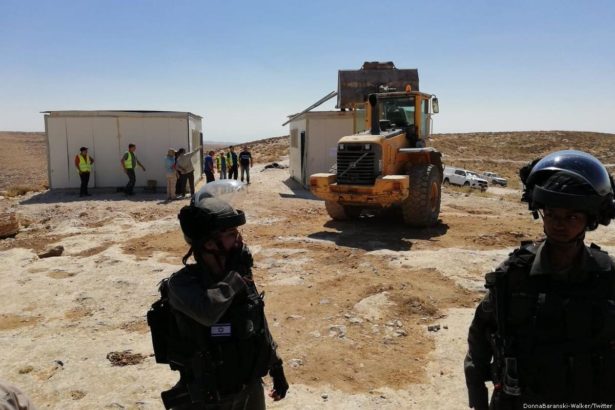 Children in occupied West Bank schools are attacked and traumatized on a regular basis, as a matter of official policy. These are stories from just November and ten days in December (subsidized by American tax dollars).

compiled by If Americans Knew

“Israeli settlers from the illegal Sha’are Tikva settlement dumped their sewage onto school property in the northern West Bank village of Azzun Atma…Sewage flooded the school courtyard and playground, resulting in a repulsive smell inside the school…this is the second time in two months settlers dump their sewage on the village school…it usually takes over 10 days for sewage water to dry, causing health hazards for students and the community at large.”

“The settlement organization known as “Regavim” [a group dedicated to Judaizing the West Bank] has filed a lawsuit, in an Israeli court, to demolish the Tahaddi 5 school, in the Beit Ta’mar area, east of Bethlehem…the school has been subjected to demolition attempts over and over, and had previously been demolished on the first day of school, for the year 2016-2017.”

“Israeli soldiers invaded…a Palestinian Bedouin village, north of Tubas in the occupied West Bank, and attacked a local make-shift school [grades 1-6], before confiscating one tent…and confiscated a tent used as its administration office…soldiers also closed the road leading to the school, and prevented the students from reaching it…The soldiers also confiscated a tractor, owned by a farmer.”

Israeli soldiers attacked…Qortoba Basic School, in the [occupied] West Bank city of Hebron…chased several schoolchildren, and tried to prevent the students from entering their school. The soldiers then assaulted the school principal after she tried to stop them from attacking the students.”

“Israeli soldiers invaded…Beit Ta’mar Palestinian village…and started firing live rounds at students, teachers and officials of the Ministry of Education, during a school celebration…soldiers, and many illegal colonialist settlers, surrounded the area, before the army attacked the children, staffers and families, who were celebrating, singing and performing Dabka, in the Tahadi Basic School in the village…the soldiers fired many gas bombs and concussion grenades at the school, resulting in injuries, while many children suffered anxiety attacks.”

Nov. 11 Army Attacks A Park Near A School In Bethlehem

“Israeli soldiers attacked…a Palestinian park near the Tahadi 5 School…east of Bethlehem, in the occupied West Bank…but the locals stopped them, before the army started firing gas bombs and concussion grenades. [Earlier that day the soldiers invaded the park] and tried to confiscate slides and swings, but the presence of an international delegation prompted them to withdraw.”

Israeli soldiers attacked, Sunday, a Palestinian school in Hebron…and fired many gas bombs and concussion grenades…at least ten students, and one teacher, suffer the effects of teargas inhalation, while some of the students fainted due to the gas bombs.

“Israeli soldiers fired a barrage of tear gas canisters toward an elementary school in the southern part of Hebron city, causing suffocation to dozens of students and teachers. They were all treated at the scene…Palestinian schools in the southern part of Hebron, which is located in Area C of the West Bank, under complete Israeli civil and military control, are constantly subjected to systematic attacks by the Israeli army.”

Israeli soldiers invaded [Sammoa in the] occupied West Bank, and demolished a Palestinian school…[they] declared it a closed military zone, preventing the Palestinians from entering it…then used their armored bulldozers to demolish the Tahadi 13 small school of several classrooms and their facilities. The school …was supposed to open in two days.

Israeli soldiers invaded…the Tahadi 13 smalls school [same K-6 school as in the previous story] and dismantled it…the soldiers confiscated all of its properties.