You Are Here: Home → Ilan Pappé on Israel’s Relentless War against Palestinian Children 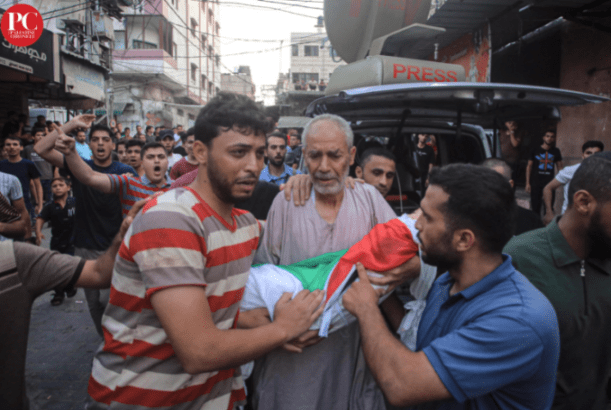 Palestinian children are at risk just by being Palestinian. (Pictured: the funeral of 5-year-old Alaa Qaddum, killed by an Israeli airstrike in besieged Gaza, August 5, 2022 (Mahmoud Ajjour, The Palestine Chronicle)

Palestinian children are dying at a startling rate – and it’s totally preventable. Israel must simply stop killing them.

“Mankind owes to the child the best it has to give.” Preamble, UN Declaration of the Rights of the Child (1959)

More than half of the population living in the West Bank and the Gaza Strip are below 18; in fact, one can confidently say that half of the people of the occupied West Bank and besieged Gaza Strip are children. Anyone who wages a war against these two territories, through house demolition, arrests without trial, shoot-to-kill policy, and humiliation, is waging war against children.

At times, whole military brigades of the Israeli army, accompanied by elite units, border police, and police chase a boy and, in most cases, kill him or at best arrest him.

If there is anything that changed in the last few years in what finally the United Nations was willing to call the colonization of Palestine, it is the intensification of the Israeli shoot-to-kill policy. And although so many of us understand that the new Israeli government will not change the policies the previous governments pursued, one can expect further brutalization in the war against the children of Palestine.

As I write this column, the news has reached us of the murder by Israeli soldiers of Fulla Rasmi Abd al-Aziz al-Musalamah. She was on her way to celebrating her 16th birthday. She was with others in a car near Beitunia, when the soldiers, without any reason, opened fire on the car and killed her. Needless to say, the Israeli newspaper reporting the “incident” blamed the driver and did not even bother to mention her name.

The killing of children is not a new aspect of Israeli policies toward the Palestinians. By April 1948, the military leadership of the Zionist forces began to strategize more clearly its policy towards any population that would be left in the villages they occupied during the 1948 ethnic cleansing. One of its clear guidelines was to either kill or send to a prison camp, at the discretion of the commander on the spot, “men at a fighting age”. The command clearly defines what is meant by men: anyone above the age of ten.

Very much like any destructive Israeli policy since the massive expulsion and killings of 1948, a new method of incremental piecemeal action and policy became the norm. It is a very deceptive policy as whomever you want to alert is faced with a killing of one or two persons every now and then, and the dots are not easily connected to produce a damming indictment. This was true in the early 1950s, but of course, since then, the numbers are massive and this incremental killing is far more visible.

In November 1950, the Israeli army shot dead three children, ages 8, 10 and 12, from the village of Yalo, while in 1952, the Israeli commando murdered 4 children, ranging from ages 6 to 14, in Beit Jalla. A year later, among the five shepherds the Israeli killed in February 1953, one was a 13-year-old boy from al-Burg.

The incremental infanticide at times is replaced by a more intensive killing of children. During the First Intifada, according to the association of Israeli and Palestinian physicians for human rights, every two weeks, a child under six was shot in the head by the Israeli army.

During the Second Intifada, 600 Palestinian children were killed. Among them, are the 12-year-old Muhammad al-Dura, the 14-year-old Fairs Odeh, and the 11-year-old Khalil al-Mughrabi. Five thousand children were wounded. In 2007, the Israeli air force killed 8 children of the Shehadeh family in Gaza.

In the first wave of attack on Gaza in 2008, more than 300 children died, and another 30 in 2012. And the highest death recorded in 2014, with more than 550 children. Put differently, since 2000, 2,250 Palestinian children were killed by the Israeli army and security forces. This is equivalent to the killing of nearly 45,000 children in Britain by a military or police force since 2000.

Why is it so important to record these grim and horrifying data and define clearly its legal and moral significance? For a few reasons. First, the fact that only here, in an alternative media outlet, you will be aware of these atrocities, is an indication of the hypocrisy of the Western media and political elite when it comes to Palestine, compared to the compassion shown towards children in the Ukraine or Iran.

Secondly, these figures accentuate the existential threat Zionism and Israel still pose to the Palestinian people and their future. It is not only land that Israel covets; it is intent on continuing the destruction of the people themselves.

“The deliberate actions of armed groups, including but not limited to state security forces…that result in the death of at least 1000 non-combatant civilians targeted as part of a specific group over a period of one year or less.”

In the First and Second Intifada, in 2009 and in 2014, the number of Palestinians killed by Israel exceeded by far one thousand. Nowhere in the UN or another human organization recording mass killings worldwide, do the Palestinians appear as a case study.

The game is not of numbers of course, but much more about the ideology that facilitates such mass killing; a kind of inhumanity only possible if the humans you target are dehumanized. An ideology that leads in many cases to genocidal policies. The definition of genocide according to article 2 of the UN charter on Genocide includes mass killing, bodily and mental harm, and physical desertion as indicators of such policies.

The report of the special representative of the Secretary-General in October 2009 and updated in November 2013, lists six grave violations of international human rights law regarding children’s rights in armed conflict. There is no armed conflict in Palestine and yet, three of these grave violations occur daily in the colonized West Bank and occasionally, in massive numbers, in besieged Gaza Strip.

Killing and maiming of children, attacks against schools and hospitals, and denial of humanitarian access. Some of the Israeli policies enacted during the siege on Gaza, in terms of denial of food, energy, and above all medical help, create a criterion by itself that should have been added to this document.

In August this year, UN Human Rights Chief, Michelle Bachelet, expressed alarm at the high number of Palestinians, including children, killed and injured in the occupied Palestinian territory since the beginning of 2022. She was referring to the killing of 37 children from the beginning of the year until that August and was particularly horrified by the killing of 19 children in one week. She stated:

“Inflicting hurt on any child during the course of conflict is deeply disturbing, and the killing and maiming of so many children this year is unconscionable.”

As a father myself, I would have used a stronger word than “unconscionable”. But I will be content with it if the Israeli mass killing of Palestinian children will not be denied anymore or marginalized and will appear as an urgent topic in the venues where the international community discusses the gravest violations of human rights in our time, and act upon it.

Ilan Pappé is a professor at the University of Exeter. He was formerly a senior lecturer in political science at the University of Haifa. He is the author of The Ethnic Cleansing of Palestine, The Modern Middle East, A History of Modern Palestine: One Land, Two Peoples, and Ten Myths about Israel. Pappé is described as one of Israel’s ‘New Historians’ who, since the release of pertinent British and Israeli government documents in the early 1980s, have been rewriting the history of Israel’s creation in 1948. He contributed this article to The Palestine Chronicle.