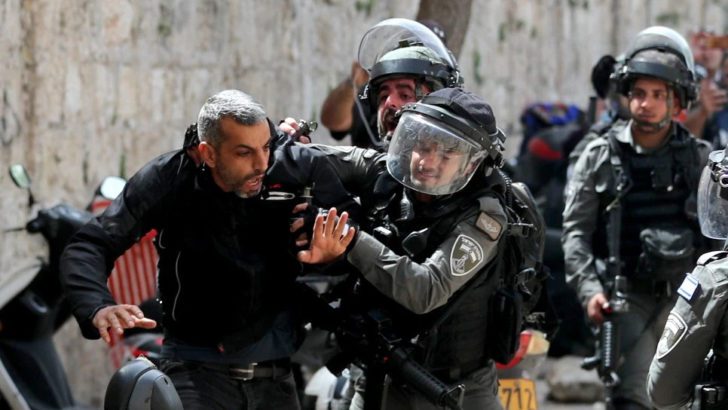 Photo tweeted by Palestinian-American journalist Mariam Barghouti on May 10, 2021. The next day Twitter suspended her account. (photo)

By Mathew Ingram, reposted from Columbia Journalism Review, May 19, 2021

THE DECADES-LONG conflict between Israel and Palestine has flared up in recent weeks, following the forced eviction of Palestinians who live in Jerusalem on land claimed by Israel and attacks on Muslims near the Al-Aqsa mosque toward the end of the holy month of Ramadan. As Palestinians and their supporters have shared images and posts about the violence on Facebook, Twitter, and Instagram, some have noticed their content suddenly disappear, or seen their posts flagged for breaches of the platforms’ terms of use when no such breach had occurred.

In some cases, their accounts have been suspended; Twitter restricted the account of Palestinian-American writer Mariam Barghouti, who had been posting photos and videos of the violence in Jerusalem, then later restored Barghouti’s account and apologized for the suspension, saying it was done by mistake.

Some of those who have been covering such issues for years don’t think these kinds of things are a mistake; rather, they believe social networks are deliberately censoring Palestinian content.

In a recent panel discussion on Al Jazeera’s show The Stream, Marwa Fatafta, of the human-rights advocacy group Access Now, said this is not a new problem, and has recently gotten worse. “Activists and journalists and users of social media have been decrying this kind of censorship for years,” she said. “But I’ve been writing about this topic for a long time, and I have not seen anything of this scale. It’s so brazen and so incredible, it’s beyond censorship—it’s digital repression. They are actively suppressing the narrative of Palestinians or those who are documenting these war crimes.”

Thousands of acts of censorship

On Monday, Access Now did a Twitter thread about censorship involving Palestinian content on Facebook, Twitter, Instagram, and TikTok. The group said it has received “hundreds of reports that social platforms are suppressing Palestinian protest hashtags, blocking livestreams, and removing posts and accounts.” Ameer Al-Khatahtbeh, who runs a magazine for millennials called Muslim, says he has documented 12,000 acts of censorship on Instagram alone in the past several weeks.

A group called 7amleh, the Arab Center for Social Media Advancement, just released a report called Hashtag Palestine, looking at such takedowns and account blockades related to the Israeli-Palestinian conflict in 2020. “This is not the first time that Palestinians’ voices have been silenced, and it is clear that it is not the last,” Mona Shtaya, an advisor to 7amleh, told Al Jazeera about the recent account suspensions and content removals.

In 2020, 7amleh found that Facebook complied with 81 percent of Israel’s requests to take down content, much of which was related to Palestine, the group says. In addition to takedowns, Fatafta said Access Now has heard many reports from groups and individuals that have been unable to use certain features, including “likes” and comments, or had their live-streams blocked or shut down in the middle of a broadcast.

The social-media companies have admitted to some takedowns and account blockages. Instagram apologized for the fact that many accounts couldn’t post content related to Palestine for a number of hours on May 6, and in some cases had their accounts flagged or blocked. The company said this was part of a broader technical problem that affected posts from a number of countries about a wide range of topics.

“Many people thought we were removing their content because of what they posted or what hashtag they used, but this bug wasn’t related to the content itself,” Adam Mosseri, the head of Instagram, tweeted. [Editor’s note: Mosseri has dual U.S. and Israeli citizenship.]

Some of those affected said they didn’t buy the explanation, however; Shtaya called it “neither logical nor convincing.” Instagram also blocked posts related to the Al-Aqsa mosque, and later apologized, saying the name of the mosque was mistakenly flagged by its moderation algorithms as terrorist content.

Facebook has also apologized for some of its takedowns in the past. In 2016, four editors at the Shehab News Agency and three executives from the Quds News Network, both news organizations that cover events in Palestine, had their personal accounts suddenly disabled, something Facebook said at the time was accidental.

According to 7amleh and other groups, the Israeli government has a cyber unit that routinely makes takedown requests related to Palestinian content, and in some cases “coordinates groups of online trolls to report and share content that includes disinformation and hate speech directed towards Palestinians.” In an email to CJR on Tuesday, a Facebook spokesperson said: “Our thoughts are with everyone affected by the horrific ongoing violence. We know there have been several issues that have impacted people’s ability to share on our apps. We’re so sorry to everyone who felt they couldn’t bring attention to important events.”

Arbitrary: Access Now, 7amleh, and a number of other human rights and advocacy groups recently wrote an open letter to Facebook, Twitter, Instagram, and other social-media networks saying their “arbitrary and non-transparent decisions constitute a serious violation of Palestinians’ fundamental rights including their right to freedom of expression, and their right to freedom of association and assembly online, which both Facebook and Twitter have pledged to honor in accordance with the United Nations Guiding Principles on Business and Human Rights.” The groups asked for more transparency around moderation efforts.

Google: Sada Social Center, which monitors social media violations against Palestinian content, said in 2020 that Palestine was not identified as such on Google or Apple’s maps, but only as the West Bank and the Gaza Strip. The group also found that Google had begun to remove the names of Palestinian cities and roads from its maps while keeping Israeli roads.

Anti-Semitism: Some Facebook users note that posts on social media criticizing Israel or defending Palestine are often flagged as anti-Semitism. The Intercept reported recently on what it called Facebook’s “secret internal rules for moderating use of the term Zionist,” which it says results in suppressing criticism of Israel. The rules appear to have been in place since 2019, which contradicts claims by the company that no decision had been made on whether to treat “Zionist” as a proxy for “Jew” when defining hate speech.

Takedown: Editorial staff at the videogame news site IGN published an open letter on Monday complaining about the removal of an IGN article and a related tweet that contained links to charities supporting Palestinian victims of violence. Both were posted May 15 in response to Israeli missile strikes on Gaza, but were taken down on May 16. IGN released a statement the next day that said the content was removed because it was “not in-line with our intent of trying to show support for all people impacted by tragic events,” and “mistakenly left the impression that we were politically aligned with one side.”

Mathew Ingram is CJR’s chief digital writer. Previously, he was a senior writer with Fortune magazine. He has written about the intersection between media and technology since the earliest days of the commercial internet. His writing has been published in the Washington Post and the Financial Times as well as by Reuters and Bloomberg.