53,000 Palestinian children detained by Israel since 1967 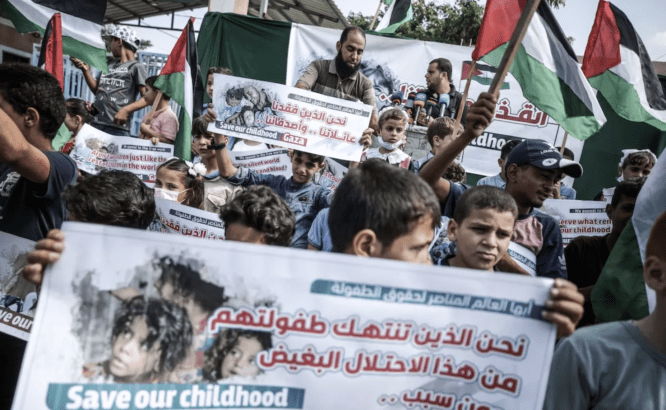 Justice denied on Palestinian Child Day – and every day (pictured: Palestinian children hold banners as they gather to release balloons during a protest against Israeli blockade in front of Beit Hanoun border crossing in Gaza City, Gaza on August 24, 2021).

April 5 is Palestinian Child Day. Today we acknowledge that Israel has arrested over 53,000 Palestinian minors since 1967. Many are tortured.

Israeli occupation authorities have arrested more than 53,000 Palestinian children since 1967, the Commission for Detainees and Ex-Detainees’ Affairs said in a statement yesterday.

Abdul Nasser Ferwaneh, the commission’s head of Studies and Documentation Department, said that the Israeli occupation deals with Palestinian children like adults, stating that they are subject to the same torture, investigation and detention conditions.

This number, Ferwaneh said, includes girls and boys, stressing that Israel does not respect international laws and conventions when it comes to dealing with minors.

About 1,300 Palestinian children were detained in 2021, Ferwaneh said; a 140 per cent increase in the rate of child detentions compared to the previous year.

Since the start of 2022, Ferwaneh said, Israel has detained more than 200 children, and there are currently 160 children inside the occupation’s jails.

In a report issued to mark Palestinian Child Day today, the Palestinian Prisoners’ Club said that Israel detained more than 9,000 Palestinian girls and boys between 2015 and March 2022.