You Are Here: Home → As Rashida Tlaib Is Sworn In, Palestinian-Americans Respond With #TweetYourThobe

As Rashida Tlaib Is Sworn In, Palestinian-Americans Respond With #TweetYourThobe 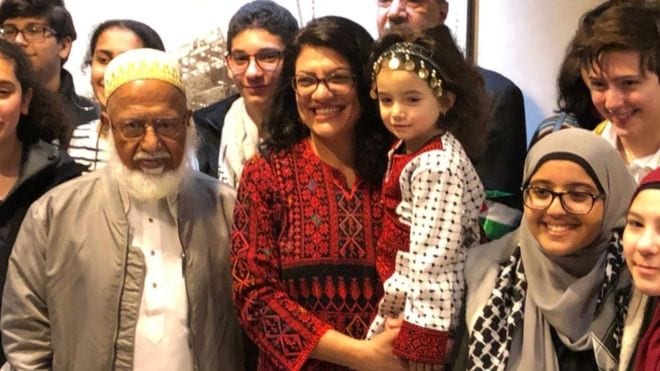 Ms Tlaib poses with supporters on her first day in Washington

The new congresswoman from Michigan wore a thobe, a traditional Palestinian dress with elaborate embroidery, to her swearing-in, and her supporters posted photos of themselves in their own.

As Rashida Tlaib arrived on Capitol Hill to be sworn into the House of Representatives on Thursday, she was wearing a distinctive outfit: a traditional Palestinian thobe, or dress, adorned with the elaborate, hand-stitched embroidery known as tatreez.

Ms. Tlaib, a Democrat from Michigan who is the first Palestinian-American woman to serve in Congress, had posted a photo of the dress on Instagram on Dec. 14, garnering 11,000 likes — but also criticisms, including racist comments. 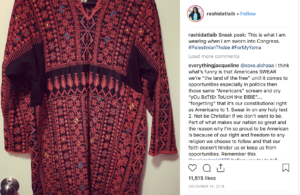 That spurred a supporter, the novelist Susan Muaddi Darraj, to create a plan to celebrate Ms. Tlaib’s achievement and educate people about Palestinian embroidery, which is loaded with symbolism and traditionally done by women. She came up with the hashtag #TweetYourThobe, intended as a call to action, and started a private Facebook group.

In two weeks, it grew to 8,000 members. And on Thursday, they went public, sharing photos of themselves and loved ones wearing thobes on Twitter, Facebook and Instagram. 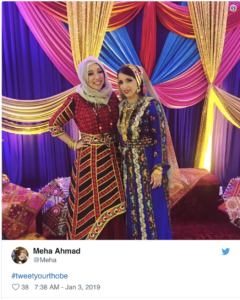 “I’ve just been tearing up all day looking at some of these pictures,” Ms. Darraj said on Thursday afternoon, speaking by phone from Baltimore.

“It’s especially moving when you see women wearing thobes that their great-grandmothers made by hand,” she added. “It’s just extraordinary, and it’s a visual testament to the relationships between mothers and daughters that we have in our culture, and I think other people can relate to that.” 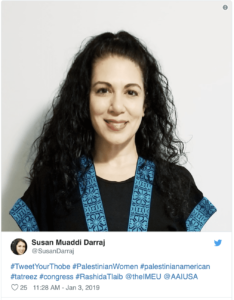 n an article for Elle published on Thursday, Ms. Tlaib explained why she decided to wear the thobe.

“Throughout my career in public service, the residents I have had the privilege of fighting for have embraced who I am, especially my Palestinian roots,” she wrote. “This is what I want to bring to the United States Congress, an unapologetic display of the fabric of the people in this country.”

She described her experience as a girl watching her mother, who came to the United States at age 20, hand-stitch the traditional dresses.

“Just like any immigrant parent, she wants all of her children to succeed, but without giving up on our roots and culture,” Ms. Tlaib wrote. She added a special hashtag for her mother in her Instagram post: #ForMyYama, an Arabic word for mother.

Ms. Tlaib was also sworn in using a centuries-old English-language Quran that belonged to Thomas Jefferson. 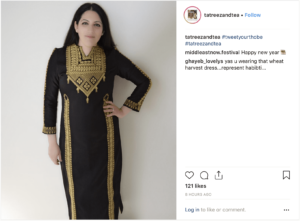 The knowledge of how to do tatreez is often passed down from mother to daughter, said Wafa Ghnaim, a Brooklyn-based tatreez artist and educator. Looking closely at pictures of Ms. Tlaib’s dress, Ms. Ghnaim saw symbols and stories, not just designs: the cypress trees around the waist, for example, which signify resilience and are often used in celebratory garments. The intricate designs extend to nearly every inch of the dress, another sign that it was meant for a joyous occasion.

In her book, “Tatreez & Tea,” Ms. Ghnaim explains the symbolism of what she calls an endangered folk art. The commercialization of embroidery and the continuing displacement of Palestinian people have led to a decline in the practice of tatreez, she said.

But it remains a potent signifier. Some women even participated in the photo-sharing from abroad, like Samar Al-Barghouthi, a Palestinian who lives in Bahrain. She shared a picture of herself wearing a thobe for a party at the women’s university where she teaches political science.

“To see Rashida wearing her dress, I felt really moved,” Dr. Barghouti said. “She is representing Michigan and still keeping her identity.” 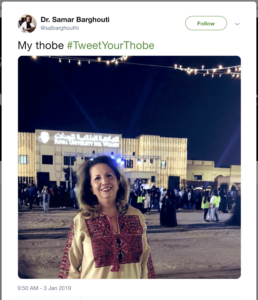 Lena Khalaf Tuffaha, a Palestinian-American poet from Redmond, Wash., noted that the designs often signify a particular village or area. And she said the virtual celebration on Thursday — with Palestinian-American women she knew, and with others she had never met in person — was a “beautiful festival atmosphere.”

“Women are often invisible in history,” she said. “This is a really powerful way of making women’s lives visible, especially Palestinian women who are often charged with keeping the culture alive, and they do it in the face of immense suffering.” 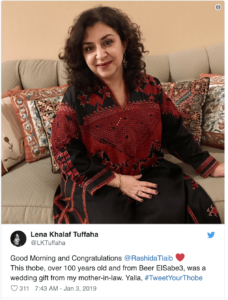