You Are Here: Home → Election of 3 Israel critics to Congress is historic, but many new Dems are committed to Israel 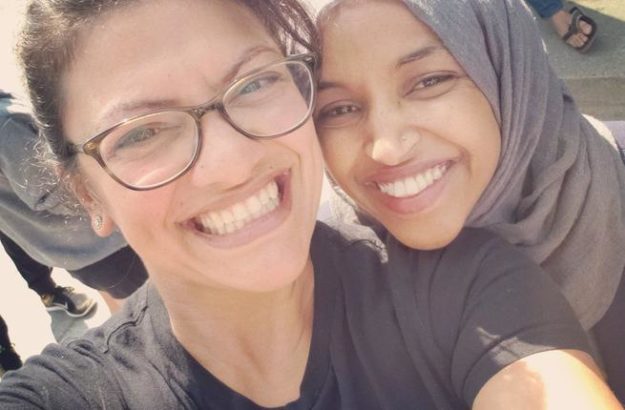 On their way to Congress: Palestinian-American Rashida Tlaib (left) of Michigan, and Ilhan Omar of Minnesota. Omar is the first Somali-American legislator elected to office in the United States. (Photo: Twitter/Rashida Tlaib)

The good news: Alexandria Ocasio-Cortez, Ilhan Omar, and Rashida Tlaib are Israel-criticizing congressional newcomers. The bad news: other Dem midterm winners join the army of Israel supporters – having vowed to keep America’s commitment to Israel “as fixed and as permanent as the sky” and “make sure that we are supporting Israel into the next generation.” In addition, some key leadership positions will be filled by pro-Israel Jews. Norman Finkelstein sees this as a sign of “a growing divide between US Jews and Israeli Jews.”

Those stars are Alexandria Ocasio-Cortez from Queens/Bronx, Ilhan Omar from Keith Ellison’s former district in Minneapolis, and Rashida Tlaib from Detroit. Omar and Tlaib are Muslim and have been highly critical of Israel; Omar called Israel an apartheid state and said once that it has “hypnotized” the world, though she has disavowed boycott of Israel. Tlaib has called for (are you sitting down?) one, democratic state in Israel and Palestine and for an end to aid for Israel. Ocasio-Cortez also sharply rebuked Israel over the Gaza massacre of May, called it a “massacre.” She is a member of the Democratic Socialists of America, which has endorsed boycott of Israel; but she waffled on her Israel criticism during the general election campaign, even equivocating about the occupation, “I may not use the right words.”

Still, there can be no question that these women represent a fresh breeze in the Congress, and the voice of the progressive base of the Democratic Party, which is showing more and more solidarity with Palestinian demands for basic rights. Jewish Insider says today there is a fight for the soul of the Democratic Party, with Linda Sarsour calling out progressive Dems for “cower”-ing to AIPAC, the Israel lobby.

There were two losses by potential Israel critics that many on the left had their eyes on. Leslie Cockburn, a journalist and realist on Middle East issues who was accused of anti-Semitism because of her criticisms of the US-Israel relationship, lost in her bid for an open seat in suburban Virginia/Charlottesville, to a Trump-backed businessman and Bigfoot-biographer, Denver Riggleman.

In suburban Philadelphia, Scott Wallace had as chair of a family foundation supported organizations that favor BDS (boycott, divestment and sanctions). He was defeated in the Bucks County district by Brian Fitzpatrick, a Republican and former FBI agent.

The elevation of Ocasio-Cortez, Omar, and Tlaib must be seen in the broad context. Republicans are overwhelmingly in favor of Israel-right-or-wrong policy under Trump. And among the other Democratic winners are many Israel-lovers. Including powerhouse Eliot Engel, who has said that these three women “need to be educated” about Israel.

The new governor of Illinois, J.B. Pritzker, a billionaire venture capitalist, has served on the national board of AIPAC, the Israel lobby organization.

Democrat Tom Malinowski defeated incumbent Leonard Lance in central Jersey. “Malinowski’s position is that America has an unbreakable commitment to Israel, rooted in a values-based alliance between these two great democracies. Jewish leaders including Rabbi Eric Yoffie (formerly the Reform leader and Israel hawk) assured voters. They added: “America’s commitment to Israel must remain as fixed and as permanent as the sky.”

Mikie Sherrill, a former Navy pilot who won a congressional seat from northern New Jersey– high income, suburban– is all about Israel on her “national security” page:

Iran’s despicable human rights record, ballistic missile program, and support for terrorist groups destabilize the Middle East and threaten the security of Israel. However, we cannot monitor Iran’s nuclear program or improve upon the nuclear agreement without a seat at the table…

Our partnership with Israel is instrumental to global security and has helped pioneer incredible discoveries that have changed the face of technology, homeland security, medicine, clean energy, and agriculture. In Congress I will work to ensure that our long-standing relationship with Israel remains strong.

Supporting Israel, and being firmly committed to a two-state solution to the Israeli-Palestinian conflict through US support of direct, bilateral negotiations aimed at resolving conflict and regional discord.

He has knocked the Iran deal and gushed about Israel to Jewish Insider:

“As a Jew and as a veteran, I will bring an understanding of what Israel’s role is in the world, as well as an understanding of the importance of the Jewish faith, to advance two things. One, to undeniably make sure that we are supporting Israel into the next generation. It is so important for a variety of reasons. People always forget the importance of Israel economically speaking, and from a national security perspective.”

Times of Israel notes that leadership will now include many Jewish Democrats, including Israel-aficionados Jerrold Nadler, Engel, and Nita Lowey.

Lowey will head House Appropriations, and she is proud of getting Israel $3.8 billion a year, more than $10 million a day, thank you.

Yarmuth is a J Street endorsee (liberal Zionist). So is Jared Polis, the next governor of Colorado.

A right wing fanatic on Israel, Engel will head Foreign Affairs, that makes him a power on foreign policy. He said last month in a Westchester synagogue:

“We have overwhelming support for Israel in the Congress. And… it will continue that way. We will maintain it that way.”

A lot like former US Ambassador Daniel Shapiro, now an advocate for Israel, who tells Jewish Insider:

It will be wise for Israel to build and strengthen relationships with these members and demographic groups, in the interest of maintaining the bipartisanship that has been such a key pillar of the U.S.-Israel relationship.

A CNN poll says that Jewish voters preferred Democrats over Republicans by 79 to 17 percent, echoing the ancient pattern of Jewish voters. Norman Finkelstein says there is a growing divide between US Jews and Israeli Jews:

The chasm between American and Israel Jewish voters will widen. The extremes are now leading, and the combined power of moderate+liberal Jews=80%.  In fact, Jews have been voting Republican at around 23% in recent elections, so about 5 percent jumped ship yesterday.

As politics have polarized, the momentum comes more and more not from the center (as in Schlesinger’s The Vital Center) but from the left/right extremes. The touchstone is Trump. True, Netanyahu is Trump’s template on a thousand things, from anti-Muslim/anti-immigrant racism and walls, to aligning with the world’s new strongmen and targeting Iran. But Netanyahu could be swallowed or made less bitter by the self-serving American Jewish illusions and delusions about Israel (admittedly fragile at this point). Trump, however, cannot be made more palatable. He’s become a genuine menace (on the fringes, even to Jews!) and Netanyahu is clearly aligned with him in a big way. This, American Jews en masse cannot abide….The American Jewish-Israeli Jewish chasm will only increase over time. Except for orthodox Jews and the Stephen Miller types, I cannot see any future for the American Jewish love affair with the Holy State. It will revert to pre-1967, when Israel will only be supported in the event of an existential crisis. Otherwise, like the meschugge aunt in the attic, it won’t be a subject in polite company.

That All-Bibi-All-the-Time Strategy is really not paying off, is it? A well-deserved black-eye for Jared [Kushner] and [David] Friedman [proponents of Trump’s Jerusalem/Saudi/peace plan]. But for Bibi the story is even worse: He may have suffered the biggest repudiation of any leader not on the ballot yesterday.

Michael Knox of US Peace Memorial Foundation rues the absence of any real antiwar movement during the campaign:

Last night’s election results for the House of Representatives demonstrated that passion, concern for others, and money can have a positive impact.  Unfortunately, however, the murder, devastation, and cost of U.S. war was not an issue in most campaigns.

Thanks to Adam Horowitz and Scott Roth.

In the weeks leading up to the 2018 elections, If Americans Knew created “Congressional Scoreboards” showing Palestine/Israel-related voting records and other actions of all Senators and Representatives who were running for reelection. We also included information on challengers’ positions on the issue where we were able.

These Scoreboards will be updated soon to reflect election results, and can be viewed here:

House: Full version of all 50 states (be patient: this may take a few minutes to load.)