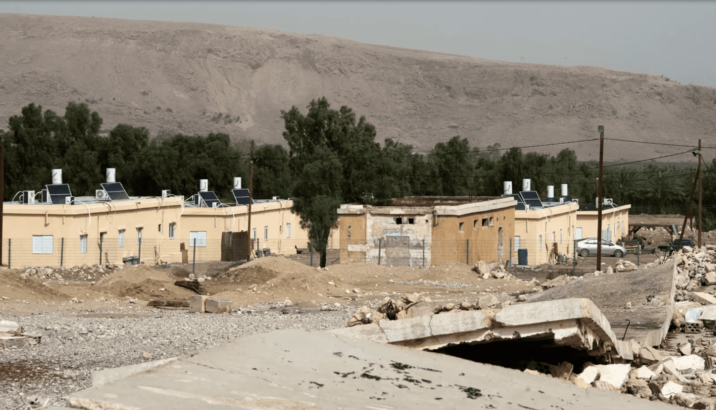 The former Camp Gadi base in mid October, 2018.Gil Eliyahu

In addition, settlement activity in Hebron continues, and Israel is trying to have international human rights observers removed.

Other troubling new governmental actions and policies have also been adopted.

by Madeeha Araj, The National Bureau for Defending Land and Resisting Settlements

Following the Akkivot Institute’s demand to disclose confidential documents from the Israeli archives on the territories occupied in 1967, a policy was recently revealed by the government of the occupation on granting economic safety nets for investments for Israelis in the occupied territories in order to expand and promote settlement, the National Bureau For Defending Land and Resisting Settlements stated.

It has appeared in the Israeli documents that the government created those networks in order to ensure that investments would not be lost if Israel withdraws from the West Bank from one hand, and to sell insurance policies against “political risks” on the other hand. The documents indicate that a private insurance company, funded and managed by the government, was established in the early 1970s after the expansion of Israeli economic activity in the occupied territories and the increase in the volume of political guarantees granted.
.
According to the financial reports of the Yanai Co., the Israeli government has pledged in the agreement with the company to pay the latter any amount to be paid under the compensation provided by the insurance policies. The Ministerial Committee for Economic Affairs ratified the establishment of Yanai in 1970, and its first meeting was held on Feb. 8, 1971. The agreement clarifies that the financing and management of the company is subject to the supervision of income and property taxes. The Director General of the Ministry of Finance determines the identity of those eligible for its services, but the ministers of security and finance stressed that “it was agreed not to introduce any item in the insurance policy that stipulates the company acts in the name of the government or its expense.”

Meanwhile, US President Trump’s recognition of Jerusalem as the capital of Israel has encouraged and increased settlement activity, and the theft of Palestinian land to strengthen Israeli control of the occupied city. This is clear from the agreement signed by the Israeli Ministry of Construction and Housing and the municipality of Ma’ale Adumim, which implements a plan to build 20,000 settlement units in the settlement east of occupied Jerusalem.

Israeli Housing and Construction Minister Yoav Galant described the project as “comprehensive and would lead to the development and expansion of Ma’ale Adumim settlement.”

According to the agreement, in 2018 and 2025, residential and commercial units will be marketed in 15 locations. The budget for the development and infrastructure of the project is NIS 2.8 billion, while a budget of NIS 190 million has been allocated for the improving old buildings in the settlement.

Hebron is also targeted by settlement activity, especially the old town, which is being settled aggressively, confiscating private and public properties and seizing the land to make it free from Palestinian existence. The Israeli government has allocated a budget of NIS 22 million To build 31 settlement units on land over the old garage of Hebron Municipality until a new occupation plan has been unveiled for the construction of other housing units in the vegetable market and the wholesale market.

At the same time, the Israeli Foreign Ministry is trying to stop the work of the International Monitoring Force (Temporary international Presence in Hebron, TIPH), which has been operating in Hebron for about 20 years, since the massacre at the Ibrahimi Mosque. According to Deputy Foreign Minister Tzipi Hotoubili, a new phase of Israeli pressure to stop the activities of TIPH has begun.

Within the context of enhancing construction in settlement, a new outpost was transformed to a military base near the village of Jiftlik in the central Jordan Valley. it is called the Gadi Camp near Rt. 90. Twelve Jewish families repaired six buildings inside the camp and live Inside it permanently.

In order to impose more control over the C classified areas, the extreme right-wing Rajavim movement submitted a report to the Knesset, attached to a proposal that was implemented silently following the passage of several racist laws that establish control over large areas. The report states, the army and the so-called civil administration and military rule in the West Bank support the annexation of more than 11-13% of Area C, specifically near the Apartheid Wall and the surrounding areas.

The Israeli Human Rights Organization B’Tselem has issued an extensive report on the focal points area that dealt with the damage caused to the Palestinian farmers since the construction of the apartheid wall and its impact on the security situation. The farmers called on the Israeli government to cancel the permit system, which force them to go to the military government offices frequently to obtain permits; 25% of applicants in the area are refused.

For his part, Israeli Defense Minister, Avigdor Lieberman recently decided to increase the number of workers in the so-called Israel Lands Administration by adding 280 employees. It is known that the Civil Administration is an Israeli military body that managed the affairs of the Palestinians before the establishment of the Palestinian Authority 1994. Thus, Israel re-activated its role following the reoccupation of the West Bank in 2002.

Breaking the silence about Israel’s occupation of Hebron