You Are Here: Home → Snowden: Israeli technology may have helped Saudis kill journalist 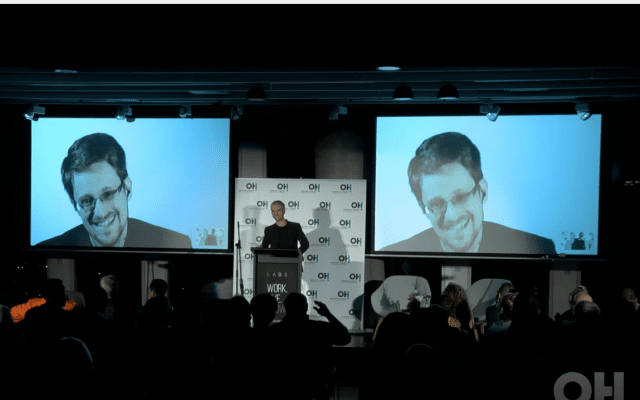 Fugitive NSA leaker Edward Snowden, speaking via video link to a group in Tel Aviv, lambasted Israel’s cyber-surveillance industry for the creation of “digital burglary tools that are being actively currently used to violate the human rights of dissidents, opposition figures, and activists,” possibly including Jamal Khashoggi. Ram Ben-Barak, former deputy director of the Mossad who now works in the surveillance industry, then justified the development of such software because Israel uses it to thwart “40 terror attacks a month” in Palestine/Israel.

by Simona Weinglass, Times of Israel

In a video address Tuesday to a group of Israeli journalists and other guests, fugitive NSA leaker Edward Snowden slammed Israel’s burgeoning cyber-surveillance industry, singling out the Herzliya-based company NSO Group for his harshest criticism.

Suggesting a link between the murder of Saudi journalist Jamal Khashoggi and Saudi use of NSO Group’s Pegasus software, Snowden asked the Israeli audience, “How is it that we have… industries in developed countries using their powers not for saving lives but for making money to such an extent and to such a level of recklessness and irresponsibility that it actually starts costing lives?”

Snowden described Israel’s NSO Group as “the worst of the worst” of cyber-surveillance companies, and said its “entire business is based on the idea of developing digital burglary tools.”

Snowden spoke to an invited audience via videolink from Moscow at a Tel Aviv event organized by an Israeli public relations agency Orenstein Hoshen. The audience was composed mainly of journalists along with clients and well-wishers of the PR firm.

The NSO Group has been the subject of much controversy in recent years, with Canadian internet watchdog Citizen Lab claiming that the Pegasus software marketed by the company is being used by a number of countries “with dubious human rights records and histories of abusive behavior by state security services.”

Pegasus infects individuals’ phones by sending them text messages that tempt them to click an attached link. If the target clicks on the link, the company gains full control over the phone, including its contents and history, and the ability to activate its microphone and camera at will.

“The NSO Group is an Israeli company,” Snowden told the Tel Aviv audience. “It’s based out of Herzliya. To a lot of people in the audience that makes this a lot less scary; a lot of the fear deflates, because you trust your industry more than others.”

But Snowden prodded the audience to consider how Israeli cyber-surveillance tools are being used to do harm abroad.

“In today’s world, [NSO Group] are the worst of the worst in selling these burglary tools that are being actively currently used to violate the human rights of dissidents, opposition figure and activists, to some pretty bad players,” he said.

Snowden described NSO Group’s activity as a “kind of predation.”

“They’re sending links to Mexican journalists, to media figures, to people in law enforcement, public health officials, and anti-corruption groups. How? It’s not like this company in Herzliya even knows who these people are. But they don’t care, because it’s not their problem.”

Snowden told the audience that there was reason to believe the NSO Group’s Pegasus software is connected to the murder of Jamal Khashoggi in Saudi Arabia’s consulate in Istanbul, Turkey.

“How did they know what his intentions were? How did they decide he was someone they needed to act against that he was worth the risk?” he asked.

“And the reality was they had bugged one of his friends and contacts using software created by an Israeli company. We don’t know the chain of consequence because this company will never comment on this, but it’s one of the major stories not being written about.”

Snowden, a former contractor with the US National Security Agency, leaked thousands of classified documents to the press in 2013 that revealed the vast scope of surveillance of private data put in place after the 9/11 attacks.

He has lived in exile ever since.

The United States has charged him with espionage and theft of state secrets, but Snowden said he still loves his country and hopes to return someday.

He also told the audience that it is an open secret that Israel spies on the US.

“Israel has a real leg up in technology, in particular in these kinds of offensive operations. Even the NSA realizes that we get hacked by the Israelis. When we file our counterintelligence priorities matrix, it’s always the same four — China, Russia, Israel and France,” he said. “If I were going to put them in a ranking I would put Israel above France.”

‘Nothing to hide, nothing to worry about’

“How nice to be liberal, to say lovely things about freedom of speech,” said Ben-Barak sarcastically. “If you ask me, my impression is he is a young and very talented guy who apparently felt he wasn’t getting enough attention so he decided to take action so he could get attention.”

“I think he’s very lucky that he stole information from the Americans and not the Russians,” he said. “If he had stolen from the Russians he would find himself with a polonium pill deep in his stomach.”

Ben-Barak is the director of a cyber-surveillance company, The Fifth Dimension, funded in part by Russian-linked venture capital firm Columbus Nova. He is also a board member of Cyabra, a company that offers to help clients identify fake internet profiles.

Several of Cyabra’s senior executives have also worked at Psy-Group, a company reportedly under investigation by US Special Counsel Robert Mueller for alleged offers to meddle in US elections.

Ben-Barak told the audience that cyber-surveillance technologies have been instrumental in thwarting terror attacks.

“Two years ago, there were stabbings here on a daily basis. This isn’t something we can fight with methods of 20 years ago,” he said. “I don’t think citizens who have nothing to hide have anything to worry about. The government doesn’t survey everyone. And the system’s purpose is to protect you and us. We stopped most of the knife attacks with this kind of technology.”

Israel thwarts 40 terror attacks a month, Ben-Barak told the audience, echoing comments made earlier in the day by the head of the Shin Bet domestic security service.

“Do you realize what this country would be like if the Shin Bet wasn’t doing an excellent job preventing 40 terror attacks a month? Would this place be livable? Would our democracy look the way it does?”

Is Israel spying on your smartphone?