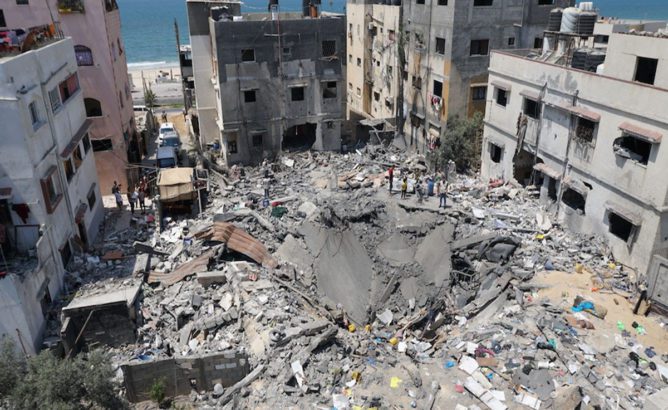 Destruction following the Israeli airstrike during the escalation in August 2022. (OCHA)

Following Israel’s three-day attack on the population of Gaza – and the Egyptian-brokered ceasefire – the United Nations offers this update on the situation and humanitarian needs left in the wake of the Israeli violence.

reposted from OCHA, the United Nations Office for the Coordination of Humanitarian Affairs, August 8, 2022 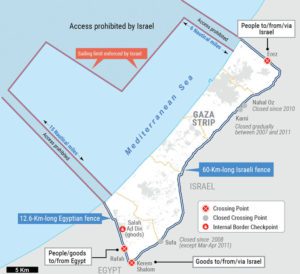 During the night of 7 August, Israeli Air Forces fired several missiles toward a residential building in the southern Gaza Strip of Rafah, killing Khaled Mansour, a senior PIJ official. Another two people were killed, and several nearby houses sustained severe damages. The same night, six people, including four children, were killed in an explosion in Jabalia Camp in northern Gaza. Palestinian sources claim the explosion was caused by an Israeli airstrike. The Israeli army claims it did not carry out any attacks at the time of the explosion and that a misfired Palestinian rocket caused the explosion.

In response to the killing of the PIJ official, militant groups in Gaza, led by the PIJ, indiscriminately fired hundreds of rockets toward Israel. Heavy exchanges of fire continued throughout 7 August, intensifying in the hours leading up to the ceasefire.

On 7 August at 23:30, a ceasefire brokered by Egypt and the UN came into effect. There were two reported attacks from Gaza very shortly after the ceasefire, but hostilities stopped before midnight. The Israeli army and the PIJ have issued statements confirming the end of their respective military operations.

On 8 August, Israeli security started to gradually remove the restrictions on Gaza crossings imposed on 2 August, allowing movement for specific categories of people with permits and authorizing commodities, including fuel. The Gaza Power Plant (GPP) which shut down on 6 August at noon due to lack of fuel (causing rolling power cuts up to 20 hours a day) resumed function at noon on 8 August, enabling power supply for about 11 hours per day.

The escalation has resulted in casualties and destruction, worsening the humanitarian situation in Gaza. OHCHR reported 46 Palestinians killed, including 15 children and 4 women. MoH in Gaza reported 360 Palestinians injured, including 151 children, 58 women and 19 older persons. 1,761 housing units in Gaza sustained damages, 18 of which are fully destroyed and 68 severely damaged. 84 families (450 individuals) are displaced in the host community, and 8,500 individuals have been affected by housing damages. As of 8 August, there are no reports of displaced people in UNRWA schools.

According to the Israeli authorities, a total of 70 Israelis were injured. Magen David Adom, Israel’s national emergency service, reported that 47 Israelis were evacuated by the organization to hospitals from the beginning of the escalation until 22:00 on Sunday. Three people were injured from shrapnel, 31 people were injured while running to shelters, and 13 from shock. Israeli sources stated that at least three shells hit near Erez crossing, causing damages, and that 1,100 rockets and projectiles were fired from Gaza throughout the escalation, of which approximately 900 crossed into Israel and 200 fell short and landed within Gaza.

Rafah crossing was closed during the weekend of 5-6 August but was regularly opened on 7 August for the movement of authorized people and goods.

All 81 health facilities remain functional, 22 of which are operated by UNRWA and 59 by MoH and NGOs, however, 1 hospital and 1 ambulance sustained damages.  The MoH has shared its list of needs with partners. There is an urgent need to replenish prepositioned trauma and emergency response supplies used to respond to this crisis. Health partners are reviewing funds and exploring possibilities for reprogramming to respond to the arising needs.

Six main hospitals have activated their Emergency Preparedness Plans and PRCS has activated its contingency plan to operate their emergency rooms 24/7. Al Quds Hospital has increased its bed capacity in case it must receive overflow patients from Al Shifa Hospital.

For those requiring life-saving treatment not available in Gaza, there is a need to enable their referrals to seek treatment outside of Gaza. The recent closure prevented an average of 50 of Gaza’s most vulnerable patients per day, from receiving critically needed treatments, surgeries and care, including for cancer and other life-threatening conditions outside Gaza. The latest escalation has further delayed the entry of 14 portable x-rays and spare parts.

The Health Cluster estimates the most urgent health needs to the value of US$ 2 million which include drugs, disposables, laboratory supplies and fuel for major hospitals.

Urgent temporary shelter for displaced people is required. This includes the provision of essential non-food items, transitional shelter cash assistance, and cleaning and disinfection supplies. Other NFIs support to affected families is also needed to protect them from weather extremes and allow for dignified support to females, children and elderly peoples, and those suffering from disability or impairment.

The Shelter Cluster activated an online emergency group to facilitate sharing information among partners with a particular focus on needs assessment and coordinated responses. So far, 63 of 168 families identified through the Ministry of Social Development assessment have received NFI assistance.

As of 18:00 on 8 August, the UN has verified 46 Palestinians killed, including 15 children and 4 women, since the start of escalation on 5 August.

The pre-existing elevated levels of trauma, psychological distress and disorders have been exacerbated, especially in children in affected areas who were already in need of MHPSS services. The Child Protection Area of Responsibility (CP AoR) foresees a need for expanded, structured and specialized CP and Mental Health and Mental Health and Psychosocial Support (MHPSS) services. Remote counseling for children and their families including Psychological First Aid (PFA) is being reactivated, including a hotline.  There is also a need to scale up recreational kits and designate supplies for future shocks.

The high risk of injury from Explosive Remnants of War (ERW), especially for people displaced due to damaged or destroyed homes, and those close to the main areas of bombardment – calls for ERW assessments, risk awareness and education. The Mine Action Area of Responsibility (AoR) has started to implement their Emergency Risk Education plan and conflict preparedness and protection campaign. ERW messages were widespread via social media, sponsored advertisements, and influencers and journalists to partners and working groups.

Gender-Based Violence (GBV) AoR partners started delivery of both remote and in-person services on 7 August, distributing 80 dignity kits and extending helpline capacities through increasing operating hours and phone operators. Some hotlines are operating 24/7 and are receiving a large number of calls. GBV in all its forms is expected to increase. Access to GBV services, dignity kits, cash voucher assistance for women at risk of GBV, is needed in affected areas, including Rafah. IDPs, GBV survivors and women and girls at risk of GBV require protection support, including GBV case management and referral, as well as PFA and MHPSS. GBV service providers and frontline workers also require PFA and emergency MHPSS.

Access challenges, shortage of electricity and medication, and bank and market closures seriously impact CP, MHPSS and GBV service provisions. Two of the 3 key radio stations for ERW messaging stopped working due to heavy bombardment. GBV and Cash and Voucher Assistance (CVA) services are affected by banks and market closures. Cancer survivors, people with chronic diseases and people with MHPSS requiring medication are affected by shortages of medicines and medical supplies. Shortages of dignity kits require donors to agree to re-program existing stocks. Frontline workers are in need of MHPSS support. Tollfree hotlines are constrained by limited staffing. MHPSS needs among children have been exacerbated and the risk of recuring trauma particularly in areas of heavy bombardment remains. Additional funding and capacity to address increasing MHPSS needs is needed.

During the escalation, animal fodder and production was at risk due to the closure of the crossing, as the overall capacity of fodder stockpiles in Gaza is no more than seven days.

Around 18% of shops reported having food provision issues related to a shortage of dairy products and rising commodity prices.

WFP reported that its food distribution for the third quarter cycle is planned to launch on 1 September in spite of delays due to crossing restrictions. UNRWA reported no shortages in food deliveries following the announcement of the opening of the Kerem Shalom crossing on 8 August.

The Ministry of Agriculture (MoA) has started assessing damage to agricultural lands, however no major damage is expected.

The WASH cluster reported no damage to water or sanitation infrastructure. Nevertheless, the access restrictions and the power supply shortages have severely impacted the provision of WASH services.

The WASH Cluster is coordinating with relevant partners to be on standby to provide any required operation and maintenance support for the sector. UNICEF is allocating the required resources for the provision of fuel, chemicals, and chlorine for the operation of critical WASH facilities. The stocks of chlorine and chemicals required to operate water wells and desalination plants are currently insufficient.

All educational activities were suspended during the escalation. Following the declaration of the ceasefire, universities announced that they will reopen on Tuesday, 9 August. All summer activities implemented by education service providers and education cluster partners will resume in the coming few days.
The education cluster is working with partners and service providers to identify damages to education facilities, if any. At least one university’s premises were affected by an air strike.

A need for a scale-up of summer activities and MHPSS programs is needed to respond to children’s needs.