You Are Here: Home → Israel makes childhood in Gaza a living hell 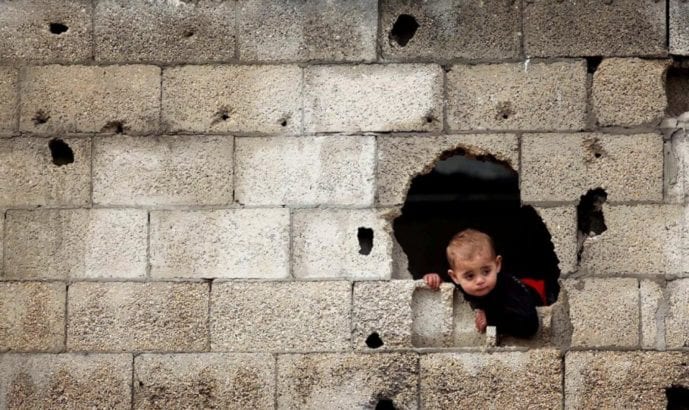 Gaza’s children suffer trauma as a matter of course (pictured: a Palestinian child in the Shujaiyya neighborhood of Gaza looks through a hole on a wall of the building destroyed by Israel, January, 2014)

Childhood in the Gaza Strip is unlike anywhere else in the world. Here, every ten-year-old has already experienced the violence of three wars and has spent his entire life under brutal blockade.

Palestinian children who were killed in Israel’s May attack on Gaza made international headlines – and rightly so, as they comprised 26 percent of the 253 killed (2 of the 12 Israelis killed were children) – but their trauma neither started nor ended in May.

Many Gazan youth live in poverty, most live with with trauma, and all are victims of whitewashing and international neglect.

Gaza is home to some of the highest unemployment rates in the world; 70% of the population are food-insecure, and almost 34% fall below the extreme poverty line. These conditions are not the result of natural causes like draught, or of ignorant mismanagement. Indeed, the region is fertile and the people among the world’s most educated.

The majority of Gaza’s economic woes are a direct result of Israel’s crushing, now 14-year-long blockade of the Strip’s 2 million residents – 67% of whom are families of refugees who were exiled during the creation of Israel.

In addition to the blockade, the so-called Jewish State has launched 4 major attacks on Gaza in the last 13 years, resulting in massive loss of Gazan life, livelihood, residences, and infrastructure.

The times between these attacks have been anything but peaceful, with smaller incursions, constant surveillance, sniper fire, and myriad interruptions of daily life.

Israel has also appropriated large swaths of Gazan farmland next to the Israeli border as a “buffer zone,” inside which farmers may be shot without warning. Israeli soldiers also regularly kill off Gazan crops, allegedly in order to get an unobstructed view of possible attackers.

Israel maintains restrictive import policies – at times, it has famously implemented a food importation plan based on Gazans’ minimum caloric needs – and has also blocked the entrance of seeds, farming equipment, and spare parts.

Israel’s export policies from Gaza are similarly prohibitive: the few agricultural products that are allowed to leave are often delayed until they spoil.

These practices have prevented farmers from selling or even producing crops.

Fishermen face similar challenges that often require them to risk their lives in order to feed their families, as Israeli military regularly shoot at their boats.

Beyond food, Israel also blocks the entrance of many raw materials for Gazan industry, as well as the exit of most products manufactured in the enclave. Building materials are limited as well, resulting in Gazan Palestinians living without proper shelter for years after Israel has bombed their homes.

In spite of malnutrition, unsafe water, and constant injuries to residents from Israeli guns and shells, Israel has also restricted the entrance of medical and humanitarian supplies to the Strip.

All told, the United Nations Conference on Trade and Development (UNCTAD) estimates the economic cost to Gaza of Israel’s policies at $16.7 billion in the last 10 years.

The combined pressures of unemployment, constant low-level (and sometimes high-level) conflict with Israel, and the Covid epidemic have placed some families intolerable situations. Despair or failure can lead to divorce and broken homes. Under these circumstances, children sometimes drop out of school and take to begging.

During the pandemic, when all classes went online, many of Gaza’s poor youth were left behind because they lacked a computer and internet connection.

By one estimate, 400 Gazan children wander the streets – dozens work the cemeteries, offering to sweep gravesites and water flowers in exchange for a shekel or two (30-60 cents). Others peddle snacks at the beach or on street corners. Still others get involved in more dangerous activities – including clashes with the Israeli military, the face of their oppressor.

Childhood in Gaza is by default traumatizing – every Gazan child over the age of 10 has experienced 3 wars; many have lost family members in senseless Israeli violence. PTSD, hopelessness, depression, and suicide are prevalent among Gaza’s youth population.

In short, children (as well as adults) in the Palestinian enclave are in the throes of a mental health crisis born of Israeli brutality. According to the Norwegian Refugee Council,

The violence [Gazan] children witness daily, including the loss of loved ones, in the context of Israel’s crippling siege…has left an entire generation emotionally damaged. It takes years of work with these children to undo the impact of trauma and restore their sense of hope for the future.

Nearly 4 in 10 Gazan youths have considered suicide. ReliefWeb explains that “Gaza’s young people are growing more desperate. They struggle to retain hope for a future free of violence…Many have come to see suicide as a means of escape from their troubles.”

The violence of the Israeli project is kept well-hidden from Americans especially – but it is conspicuous every minute of every day to Palestinians – whether in Gaza, the West Bank and East Jerusalem, or inside Israel.

Many of these practices constitute crimes against humanity or war crimes (or both).

Israeli and international human rights organizations inside have studied the situation in depth, and have declared Israel an apartheid state.

The United States has laws against providing military aid where such human rights abuses are taking place – but in spite of years of documentation and reporting by prominent organizations, Congress funnels over $10 million in American tax dollars to Israel every single day.

This can only happen as long as Americans remain in the dark or silent about Israel’s brutality.

Gaza’s children, the most innocent of the many innocent victims of Israel’s violent occupation and blockade, deserve better.