You Are Here: Home → Israeli NGO refers Israel to Int’l Criminal Court for torture of Palestinians 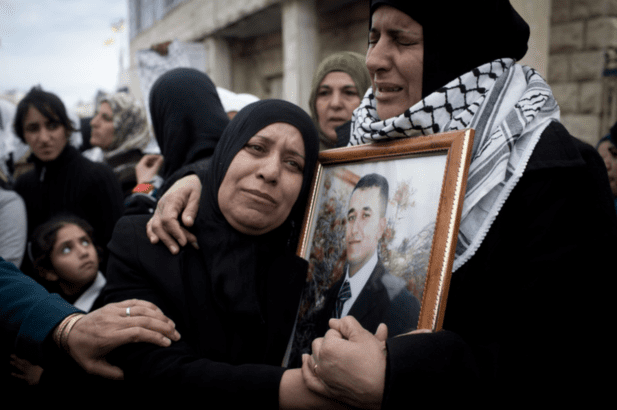 Pictured: relatives of Arafat Jaradat mourn at his funeral, 25 February 2013. The father of two died after an interrogation at Israel’s Megiddo prison, and an autopsy found evidence he had been tortured.

Public Committee Against Torture in Israel says that after 30 years of fighting torture, it had “reached the unfortunate conclusion” that Israel has no wish to end torture, honestly investigate victims’ complaints and prosecute those responsible.

An Israeli anti-torture body has referred its own country to the International Criminal Court (ICC) after concluding that Israel is “not interested and unable to stop the use of torture against Palestinians”.

The Public Committee Against Torture in Israel (PCATI) said on Friday it had demanded that Israelis involved in torture be tried as part of an investigation by the Hague-based ICC over suspected war crimes committed by Israel in the occupied Palestinian territories.

It said that after 30 years of fighting torture it had “reached the unfortunate conclusion” that Israel has no wish to end torture, honestly investigate victims’ complaints and prosecute those responsible.

“For us, this is a necessary and obligatory step today in our struggle for the moral image of Israeli society, and for the sake of justice for the victims we represent,” it said in a statement.

Established in 1990, the PCATI has represented and worked to protect Israelis, Palestinians, refugees and migrants who have suffered torture and inhuman or degrading treatment in detention.

The PCATI noted that over 1,300 complaints of torture victims had been filed with Israeli law enforcement authorities between 2001 and 2021 in the belief that the system will fulfil its duty, conduct fair and exhaustive investigations and do justice to the victims.

However, the group said, that led to zero indictments and just two criminal investigations – including in cases where “unequivocal evidence of serious violations of the law” has been collected.

“The law in Israel backs up the culture of falsehood and cover-up that still exists in the security system,” the PCATI said.

“We understood after 30 years that the system of Israeli courts is unwilling and unable to create change. They have a culture of immunity,” she said.

“We are the first Israeli organisation to take such a step and we expect very hard and difficult reactions.”

“All of their complaints were rejected in Israel. Maybe finally justice can be achieved for them in the international court,” she said.

Unlike the Palestinian Authority, Israel is not a signatory of the ICC’s Rome Statute, which the country says means the court has no jurisdiction there.

Multiple complaints against Israel at ICC

However, the ICC prosecutor in March 2021 formally began probing war crimes allegedly committed in the occupied Palestinian territories – by both Israel and Palestinian groups such as Hamas.

Investigations are opened by the ICC in places where the domestic authorities are unable or unwilling to probe allegations of abuse. Israel has previously said it will not cooperate with any ICC investigation.

The PCATI application is submitted in cooperation with the International Federation for Human Rights (FIDH), an organisation that unites 192 human rights organisations from around the world.

“They have unlawfully deported them from the Palestinian territories into Israel for the purpose of such treatment. They have denied them the fundamental right to a fair trial.”

The PCATI is not the first Israeli human rights organisation to conclude that the country’s authorities are unwilling and unable to investigate abuses. In 2016, leading human rights group B’Tselem ceased submitting complaints to the Israeli army regarding the alleged mistreatment of Palestinians, complaining the system’s real function was to cover up abuses.

MORE ON ISRAEL AND TORTURE:

MORE ON ISRAEL AND THE ICC: