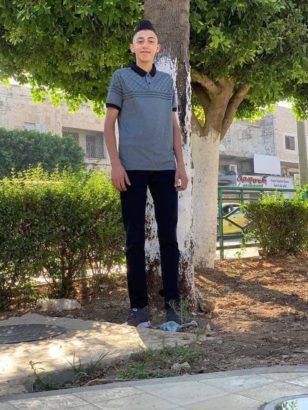 Hundreds of Israeli soldiers in armored vehicles invaded the Palestinian city of Nablus, shooting 40 people & killing 3, including a senior resistance commander and a teen…

Updated: At dawn Tuesday, the Israeli occupation army initiated a massive offensive into Nablus, in the northern part of the occupied West Bank, killing three Palestinian and injuring at least 40 Palestinians, including four who suffered serious wounds, in addition to attacking medics and firing shells at one home.

The Al-Aqsa Brigades of the Fateh movement said Nabulsi and Sbhouh were among its senior fighters, adding that Israel has been trying to kill them for a while.

Ahmad Jibril, the head of the Emergency Department at the Palestinian Red Crescent Society (PRCS) in Nablus, said hundreds of soldiers in many armored vehicles and jeeps invaded the Eastern neighborhood and the Old City.

He added that dozens of Palestinians protested the invasion before the army started firing a barrage of live rounds, in addition to rubber-coated steel bullets and gas bombs.

The soldiers fired shells at a home they surrounded in the Old City of Nablus, killing three Palestinians, and wounding many others, including one in a very critical condition.

Many Palestinian resistance fighters also exchanged fire with the invading soldiers in the Old City and several parts of the city.

Jibril said the soldiers shot at least forty Palestinians, including four who suffered critical injuries and added that they also fired live rounds at Palestinian ambulances and prevented many medics from entering the areas it was invading.

He also said that the medics tried to reach a woman the soldiers shot, but the army prevented them from reaching her.

The Health Ministry said that two wounded Palestinians, including four in serious condition, were rushed to the Arab Specialty Hospital, and two, including one who was critically injured, were moved to the Najah Hospital.

Mosques in the city were using loudspeakers calling on the Palestinians who could reach hospitals to head there and donate blood due to the large numbers of wounded residents.

The soldiers imposed tight sieges on several neighborhoods, especially al-Habala, Faqqous and Sheikh Mosallam, closed many streets, mainly Faisal and Hittin, and broke into many buildings before stationing their sharpshooters, who fired many live rounds at the Palestinians.

A local radio station, Shabab FM, announced that it had to stop its broadcast after the soldiers targeted it with many live rounds in the Old City of Nablus.