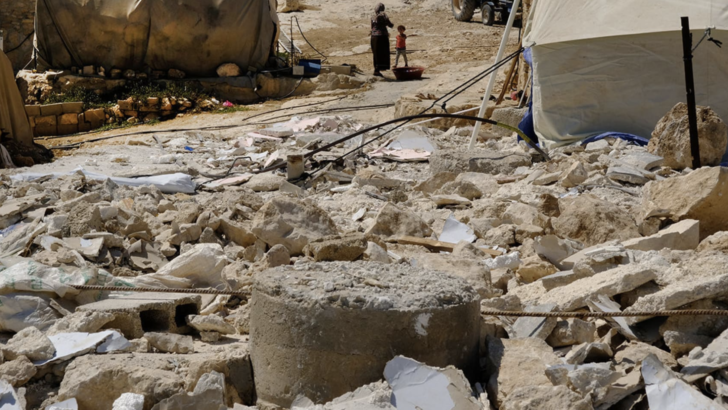 Demolition of Palestinian homes – last week’s excuse was to create Israeli “nature reserves,” this week a “firing zone” – causes now-homeless Mahmoud Hamamdi to ask, “Who is the terrorist: the one who builds a house or the one who demolishes a house?”

by Gideon Levy and Alec Levoc, reposted from Ha’aretz

It’s obvious from the pink walls, the colored tiles decorated with butterflies and the white ceramic flooring that the people who lived here loved their home, maintained it as best as their meager means allowed and gave it a distinctive look. The gardening outside tells the same story: small, well-tended pine saplings planted in the arid, rocky ground, a small herb garden, miniature fruit trees. All of this now lies in ruins, alongside water cisterns and drainage ditches that were also demolished in two tiny shepherd communities in the South Hebron Hills, planted among the lawless wilds of Jewish settlements. Here, a quiet population transfer is going on every day with no one to stop it.

But there’s one small sign of success here: No one is leaving. The goal, as transparent as it is despicable, is to force residents here to move to towns and cities and leave the area cleansed as much as possible of its Palestinians. The demolition of the homes and cisterns is the weapon of those who would rid the land of its indigenous people.

The Jordan Valley and the South Hebron Hills are the regions being targeted by the de-populators and annexation-schemers. Here is where it starts: expansion of the borders of Israel in an ostensible effort to enhance its security. From the dawn of the occupation, Israel has coveted these two separate regions – the southernmost one and the easternmost one.

Last week, we witnessed the results of demolitions in the Jordan Valley; this week we saw ruins in the South Hebron Hills. In both places, Israel is building for Jews and destroying what belongs to Palestinians in a bloodcurdling systematic way. In the Jordan Valley, nature reserves were the pretext for expulsion; here, in the South Hebron Hills, it’s firing zones. Firing Zone 918 only encroaches, of course, on the 11 Palestinian villages in the area, never at the outposts that crop up on every hill.

The interest people of conscience in Israel and abroad took in the South Hebron Hills helped turn the upper and lower parts of the town of Yatta – Masafer Yatta and Shafa Yatta – into a relatively well-cultivated area. Ironically, the destruction Israel is fomenting here by order of the settlers has turned local shepherd hamlets and other villages into “heritage” sites: the heritage of nonviolent resistance to the occupation and of clinging to the land, and also that of a new kind of construction, aesthetic and ecological. Homes made of rocks, solar energy, wind turbines, ecological toilets, renewable energy sources and a rainwater-irrigation system for cultivating the land.

Distress engenders progress here, destruction spurs innovation. Nevertheless, the scenes of the devastation, like the latest ones from September 11, leaves no one indifferent.

On the anniversary this year of the toppling of the World Trade Center, the forces of the Civil Administration, the arm of the Military Government that implements civil policy in the occupied areas, swarmed in to perpetrate their acts of destruction, in miniature, on a purely coincidental historical date. After all, every day is a good day for demolishing Palestinian homes. In the course of that day, IDF and Civil Administration forces deployed at three sites: Al Mufaqara, Khallet al-Daba and, after traveling along the then-still-intact dirt-and-concrete road, to the hamlet of Khirbet Jinbah. At all of them, they wreaked destruction.

The days are not as hot as they were a few weeks ago in the South Hebron Hills, autumn is in the air, but the hallmarks of summer linger: the parched earth amid a rock-strewn expanse of thorns. A winding dirt road that passes next to the outpost of Avigayil leads to Al Mufaqara, a cluster of homes made of small stones, and to Mahmoud Hamamdi, the community’s unofficial spokesman, dressed in traditional garb and a keffiyeh.

Hamamdi says he remembers us from a previous visit 20 years ago, in November 1999, during a large-scale evacuation of the locals. There was demolition then and there is demolition now. This time his family’s homes were razed.

About 150 people live here now, says Hamamdi, who was born on this land in 1965: “For 54 years, I have not left Al Mufaqara. You [Israelis] said that we live here only a few months of the year, but we are here all the time. You said ‘closed military zone’ and yet you built Avigayil and Havat Ma’on and you let Mitzpeh Yair grow and you let Nof Nesher grow. For them it is not a closed military zone.”

Four homes were demolished here two weeks ago, in this hamlet, where the wreckage of an old car with German license plates lies on the slopes.

“These people have no pity,” Hamamdi says, as we sit on the ceramic-tile floor of the madafa, the local communal building. “All they think about is strength. But strength is for mules. Why do you let the settler build, but not the Palestinian? Am I not a human being? Who is the terrorist: the one who builds a house or the one who demolishes a house?”

Since that earlier evacuation, back in 1999, Israel has not stopped trying to evict these people from their homes. After the September 11 destruction, 16 people were left homeless here, among them a widow and her six children.

On the day before the demolition, Civil Administration forces arrived to photograph, survey and disconnect a water pipe. The next morning, Nasser Nawaj’ah, a field researcher for the Israeli human rights organization B’Tselem, who lives in the nearby village of Sussia, phoned Hamamdi. The army, the Border Police and the Civil Administration are heading to the village, he warned him. “It can’t be because of the pipe,” Hamamdi thought. He quickly discovered that the target was his family’s homes.

Soldiers handcuffed him for several hours and he watched helplessly as four homes were razed – one was his and the other belonged to his daughter and grandchildren. Two bulldozers, two vehicles carrying soldiers, a truck with a crane from the Sami Ovadia company. By around 11 A.M., it was over. Along the way the wreckers also leveled the fence of a sheep pen and damaged cisterns. Hamamdi photographed the local brigade commander, who showed up to oversee things and then left, rifle slung de rigueur over his shoulder.

Hamamdi’s two little granddaughters, Sausan, who is almost 2, and 4-month-old Maharan, are lying on the floor of the nearby tent that they received from the Red Crescent. It’s hot and stuffy inside. The proud grandfather shows us a photo of Sausan on his cellphone, brandishing a stick at the soldiers who came to demolish her home. A heroine is born. The ruins of the mosque that Israel smashed here in 2012 are still in place nearby, like a monument.

The dirt road that leads up to the town of Yatta is fairly busy. Across the way we see vans carrying sheep and camels that were purchased there, and cars carrying workers hoping to sneak into Israel through the last remaining breaches in the separation barrier here. The sight of the sheep and the workers is heartrending. Mashtuba cars (Arabic for “erased” because the vehicles have no license plates), many from chop shops in Israel and sold to West Bank residents at rock-bottom prices, ply these back roads. They can’t use the main thoroughfares for fear of both the Israeli and Palestinian police, only these lawless rocky routes. The jalopies pass by, trailing clouds of dust, on these fascinating roadways – just half an hour from Be’er Sheva.

In Khallet al-Daba, a small Palestinian flag flies over a new pine sapling, next to a heap of rubble. The flag was raised after two homes were demolished here. The wrecking crew showed up after finishing the job in Al Mufaqara. It was late morning, September 11.

Some 70 people dwell in this hamlet. Thirteen of them – four adults and nine children, all from the Dababsi family – are now homeless. Two homes were razed; locals say a stop-work order had been issued for only one of them. The homes were originally built six years ago and were also razed in 2016. Now they are again piles of rubble, a toilet perched among them bearing a sticker of the European Union, with its gold stars. The EU donated these toilets to this disaster area. Will the EU lodge a protest about the latest demolition? Will the Europeans protest the fact the projects they fund are being trampled by Israel?

Jaber Dababsi, 34, a father of four, is one of the new homeless here. He says that his wife’s handbag containing her gold jewelry and 1,700 shekels ($485), disappeared during the demolition. After the troops left, he found the bag in the valley, empty. No, he won’t file a complaint with the police, because there’s no point. They won’t investigate anyway, he says. “If they hadn’t uprooted the plants and the bushes, we would have served you tea with mint and tea with lemon,” Dababsi says with a smile. The power shovel had been at work right here and did not spare the mint bushes or the young lemon tree, from whose remains hang two withered lemons. Seven-year-old Rithan and 10-year-old Rian are sitting in the shade cast by the ruins of their home. They’re dressed exactly alike and have completely identical haircuts.

We drive along a dead-end road that ascends from Moshav Carmel to Khirbet Jenbah, at the foot of Mitzpeh Yair. Part of the road is dirt and part concrete; the latter was poured by the Palestinian locals at night, secretly, so no one would see.

The wrecking crew arrived here on September 11 and made a shambles of the place. The troops placed huge boulders across the road to create an impassable obstacle and, to be on the safe side, also uprooted the concrete section. This week, the desperate occupants of a Palestinian car tried to find a bypass route on the hillside, but to no avail. The road remains blocked. When local residents wanted to bring in an excavator to move the boulders and rebuild the road, they discovered to their amazement that the forces of occupation were one step ahead of them: Someone had called the owners of excavators in Palestinian Yatta and warned them not to dare supply equipment that would be used to clear the road, or they would face the consequences. The tentacles of the occupation reach everywhere.

In response to a query from Haaretz this week, a spokesman for the Coordinator of Government Activities in the Territories stated: “The structures mentioned, as well as the cisterns and the dirt road that was blocked, were built in a firing zone in the South Hebron Hills illegally and without the requisite permits. Furthermore, the enforcement was carried out in accordance with proper authority and procedures.”