You Are Here: Home → Israelis Have Taken To Spitting on Palestinians During Coronavirus

Israelis Have Taken To Spitting on Palestinians During Coronavirus 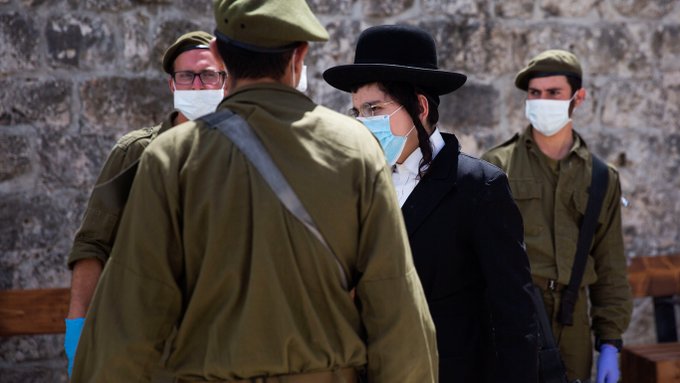 Spitting at someone is a universal insult. In Israel, however, spitting at Palestinians is an entirely different story.

Now that we know that the deadly coronavirus can be transmitted through saliva droplets, Israeli soldiers and illegal Jewish settlers are working extra hard to spit at as many Palestinians, their cars, doorknobs, and so on, as possible.

If this sounds to you too surreal and repugnant, then you might not be as familiar with the particular breed of Israeli colonialism as you may think you are.

In all fairness, Israelis have been spitting at Palestinians well before the World Health Organization (WHO) lectured us on the elusive nature of the COVID-19 disease and on the critical need to apply ‘social distancing’.

Indeed, if you Google the phrase ‘Israeli spitting’, you will be inundated with many interesting search results, the like of “Jerusalem Judge to Jews: Don’t Spit On Christians“, “Christians in Jerusalem want Jews to Stop Spitting on Them“, and the more recent, “Israel Settlers Spitting on Palestinian Cars Raises Concern over Attempt to Spread Coronavirus”.

Interestingly, most of this coverage throughout the years has been carried out by Israel’s own media, while receiving little attention in Western mainstream media.

One could easily classify such degrading acts as yet another example of the Israelis’ false sense of superiority over Palestinians. But the deliberate attempt at infecting occupied Palestinians with the coronavirus is beneath contempt, even for a settler-colonial regime.

Two particular elements in this story require a pause.

First, that acts of spitting at Palestinians and their properties, by both occupation soldiers and settlers, have been widely reported in many parts of occupied Palestine.

This means that, within a matter of days, the Israeli army and settlers’ cultures so swiftly adapted their pre-existing racism to employ a deadly virus as the latest tool in subjugating and harming Palestinians, whether physically or symbolically.

Second, the degree of ignorance and buffoonery that accompany these racist and degrading acts.

The power paradigm that has governed the relationship between colonial Israel and colonized Palestinians has, thus far, followed a typical trajectory, where Israel’s bad deeds often go unpunished.

Those racist Israelis who are deliberately trying to infect Palestinians with the COVID-19 are not only criminal in their thinking and behavior, but utterly foolish as well.

When Israeli soldiers arrest or beat up Palestinian activists, they are as likely to contract the coronavirus as they are to transmit it.

But, of course, Israel is doing much more to complicate, if not entirely hinder, Palestinian efforts aimed at containing the spread of the coronavirus.

On March 23, a Palestinian worker, Malek Jayousi, was tossed out by Israeli authorities at the Beit Sira military checkpoint, near Ramallah, after he was suspected of having the coronavirus.

A video footage of the poor worker huddling near the checkpoint, after he was “dumped like trash”, has gone viral on social media.

Widespread condemnation of inhumane Israeli treatment of this Palestinian worker. He was dumped on the side of the road by an Israeli military checkpoint near Ramallah after his Israeli employer suspected he could have #coronavirus. Malek is now receiving proper care.@ilo pic.twitter.com/qFR9xhE606

As shocking as that image was, it was repeated in other parts of the West Bank.

Of course, the Palestinian workers were not tested for the virus, but had merely exhibited flu-like symptoms, enough to make Israel dispose of them as if their lives did not matter in the least.

Two weeks later, the Palestinian Governor of the occupied city of Qalqiliya, Rafi’ Rawajbeh,  told reporters that the Israeli army has opened several wastewater tunnels near the northern Palestinian city, with the aim of smuggling Palestinian workers back to the West Bank, without prior coordination with the Palestinian Authority.

Without testing hundreds of those smuggled workers, the PA, already operating with limited capacity to confront the disease, will find it impossible to contain the spread of the virus.

Palestinian claims of Israel’s deliberate attempt at worsening the spread of the coronavirus in Palestine were further confirmed by the Geneva-based Euro-med Monitor, which, on March 31, called on the international community to investigate the ‘suspicious behavior’ of Israeli soldiers and Jewish settlers.

During Israeli army raids on Palestinian homes, soldiers “spat at parked cars, ATMs and shop locks, which raises fears of deliberate attempts to spread the virus and cause panic in the Palestinian society,” Euro-Med stated.

Article 56 of the Fourth Geneva Convention does not say anything about the need for members of the Occupying Power to stop spitting at occupied and subjugated communities; most likely, because it is a given that such sordid behavior is completely unacceptable and does not require a separate textual reference.

However, Article 56, as was recently emphasized by UN Special Rapporteur for the situation of human rights in the Palestinian Territory, Michael Lynk, does require Israel, the Occupying Power, to “ensure that all the necessary preventive means available to it are utilized to ‘combat the spread of contagious diseases and epidemics.’”

Israel, however, is failing its legal mandate, and horribly so.

Even the Israeli mayor of Jerusalem, Moshe Leon, has himself stressed the inequality in the official Israeli response to the spread of the coronavirus.

Despite the severe shortages in East Jerusalem and West Bank hospitals, the situation in the besieged Gaza Strip is simply disastrous, as Gaza’s Health Ministry has declared on April 9 that it has run out of its coronavirus test kits, which never amounted to more than few hundred, in the first place.

This means that the many Gazans who are already under quarantine will not be released any time soon, and that new cases will not be detected, let alone cured.

We have repeatedly warned in the last few weeks that this terrifying scenario was going to happen, especially as Israel is using the coronavirus as an opportunity to further isolate Palestinians and to barter potential humanitarian aid with political concessions.

Without immediate and sustainable intervention from the international community, occupied Palestine, and especially impoverished and besieged Gaza, could become a hotbed for COVID-19 for years to come.

Israel will never relent without international intervention. Without being held accountable, even a deadly virus will never alter the habits of a vile military occupation.

Ramzy Baroud is a journalist and the Editor of The Palestine Chronicle. He is the author of five books. His latest is “These Chains Will Be Broken: Palestinian Stories of Struggle and Defiance in Israeli Prisons” (Clarity Press, Atlanta). Dr. Baroud is a Non-resident Senior Research Fellow at the Center for Islam and Global Affairs (CIGA), Istanbul Zaim University (IZU). His website is www.ramzybaroud.net

Israeli settlers shout at Palestinians: ‘We go to heaven, you go to hell – If war breaks out the Jews will kill you all’ [VIDEO]