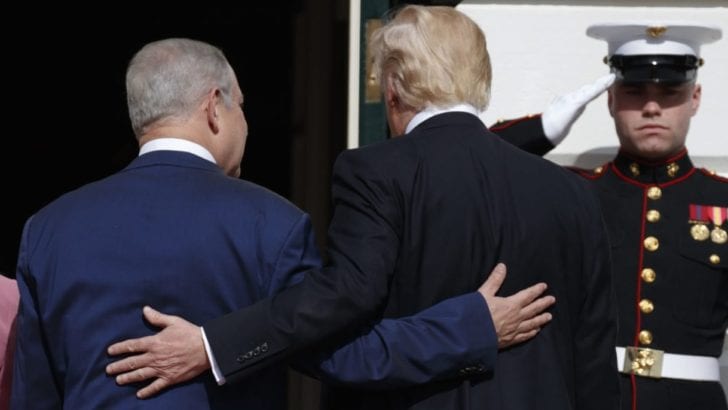 See addendum about Wikileaks below

In one of the extensively redacted documents, an official who appears to be an Israeli minister warns that Trump was “going to be defeated unless we intervene.”

He goes on to tell a Trump campaign official: “The key is in your hands.”

[RELATED: Despite coronavirus-caused cutbacks, Israel expects to get full $3.8 billion]

The previously classified documents were released in response to a lawsuit brought by the Associated Press, CNN, the New York Times, Politico and the Washington Post.

The unsealed documents suggest that rather than Russia, it was Israel that covertly interfered in the election.

While all these media companies except one seem to have ignored the apparent Israeli connection revealed in the FBI documents, Israeli media have been quick to jump on it.

“Newly released documents from the FBI suggest that Roger Stone, a senior aide in the 2016 Trump campaign, had one or more high-ranking contacts in the Israeli government willing to help the then-Republican Party nominee win the presidential election.”

The Times of Israel, the first to report on this, states:

“The FBI material, which is heavily redacted, includes one explicit reference to Israel and one to Jerusalem, and a series of references to a minister, a cabinet minister, a minister without portfolio in the cabinet dealing with issues concerning defense and foreign affairs,’ the PM, and the Prime Minister.”

TOI points out: “Benjamin Netanyahu was Israel’s prime minister in 2016,” and reports circumstantial evidence that the “PM” mentioned in the document refers to Netanyahu:

“One reference to the unnamed PM in the material reads as follows: ‘On or about June 28, 2016, [NAME REDACTED] messaged STONE, “RETURNING TO DC AFTER URGENT CONSULTATIONS WITH PM IN ROME.MUST MEET WITH YOU WED. EVE AND WITH DJ TRUMP THURSDAY IN NYC.’ Netanyahu made a state visit to Italy at the end of June 2016.”

TOI also notes that “the Israeli government included a minister without portfolio, Tzachi Hanegbi, appointed in May with responsibility for defense and foreign affairs.”

Ha’aretz also names Hanebi as the likely contact, and confirms that he “was in the United States on the dates mentioned, attending, among other things, a roll out of the first Israeli F-35 jet at a Lockheed Martin plant in Fort Worth, Texas.”

The previously classified FBI affidavit says: “On or about August 12, 2016, [name redacted] messaged STONE, “Roger, hello from Jerusalem. Any progress? He is going to be defeated unless we intervene. We have critical intell. The key is in your hands! Back in the US next week.”

Another section of the affidavit states: “On August 20, 2016, CORSI told STONE that they needed to meet with [name redacted] to determine “what if anything Israel plans to do in Oct.” (Corsi refers to Jerome Corsi, a pro-Israel commentator and author known for extremist statements.)

Roger Stone, a longtime confidant of President Trump who worked on the 2016 campaign, was convicted last year in the Robert Mueller investigation into alleged collusion between Russia and the Trump campaign.

Stone has denied wrongdoing, consistently criticizing the accusations against him as politically motivated. Numerous analysts have found the “Russiagate” theory unconvincing, and the American Bar Association reported that Mueller’s investigation “did not find sufficient evidence that President Donald Trump’s campaign coordinated with Russia to influence the United States’ 2016 election.”

There have been previous suggestions that it was Israel that had most worked to influence the election.

“If you’re interested in foreign interference in our elections, whatever the Russians may have done barely counts or weighs in the balance as compared with what another state does, openly, brazenly and with enormous support.”

The Mueller investigation similarly revealed indications of Israeli interference in the election, but Ha’aretz reports that this was largely hidden.

The Israeli newspaper reports: “References to some sort of Israeli involvement in Trump’s 2016 campaign cropped up during Robert Mueller’s official investigation of the so-called Russia collusion affair, but were thoroughly redacted.”

Ha’aretz continues: “A disproportionately large number of people investigated or questioned in the Mueller probe –  oligarchs, advisers and cyber specialists –  also had ties to the Israeli establishment.”

The article goes on to report: “Perhaps it’s worth mentioning that both Stone and convicted Trump campaign manager Paul Manafort were close collaborators with Netanyahu’s legendary strategist and world-class dirty campaigner, the late Arthur Finkelstein. They and others were known as ‘Arthur’s boys.’”

The Justice Department originally tried to keep the FBI documents classified. Assistant U.S. Attorney Aaron Zelinsky claimed that releasing them would threaten ongoing investigations and the “privacy of third parties.” The unsealed document now suggests that one of the third parties being protected was Israel.

Zelinsky is a longtime Israel advocate who had been part of Mueller’s team. He previously lived in Israel and served as a law clerk for the Israeli Supreme Court. He is currently active in a Baltimore synagogue that has close connections to Israel.

While such direct ties to the Israeli government have rarely been proven, pro-Israel lobbyists have long been known to play an important role in U.S. Middle East policies.

Megadonor Sheldon Adelson is widely credited with driving Trump’s Mideast policies. (Adelson once said that he regretted serving in the U.S. Army instead of the Israeli military.) Adelson is just one of the pro-Israel billionaires funding Republicans.

The same situation has long occurred with the Democratic party. The Clintons’ policies were similarly influenced by Israeli megadonor Haim Saban. Many of the recent Democratic candidates were reliant on campaign donations from Israel partisans. Pete Buttigieg, for example, had 18 pro-Israel billionaires supporting him.

Sometimes Democratic and Republican donors have worked together on behalf of Israel. Adelson and Saban, for example, joined forces in a 2015 summit in Las Vegas to raise money for Israel activism. Participation was limited to individuals who would pledge at least a million dollars. In 2018 Saban and Republican donor Paul singer co-hosted a dinner for the Trump peace team.

Americans have the right to the full facts

Former CIA and military intelligence officer Philip Giraldi says that the Justice Department should un-redact the portions regarding Israel.

Giraldi, who is executive director of the Council for the National Interest, says:

“We already know that Israel interceded by way of Jared Kushner and Michael Flynn to interfere with a U.N. vote while Barack Obama was still in office. Americans need the full facts on outside interference in our elections and our foreign policy.

“We give Israel over $10 million per day and have the right to know to what degree Israel was guilty of corrupting our elected officials and manipulating our political process.”

The intelligence referred to is assumed to be the various emails and memos that were then published later that year by Wikileaks, and this is borne out by other sections of the FBI documents.

Wikileaks revelations in later years also ended up exposing Israeli actions. Among other things, Wikileaks revealed Israeli plans to keep Gaza on the brink of collapse, to use violence against Palestinian nonviolence, and to make war upon civilians.

Wikileaks exposed a memo that “helped kill a half million people in Syria. The memo, by U.S. diplomat James Rubin, said that “bringing down Assad” would be a “massive boon to Israel’s security.”

In his years running Wikileaks, founder Julian Assange published information that exposed corruption and malfeasance by a wide variety of actors, including the U.S. government. He is now in prison in Britain for this “crime,” his health steadily deteriorating under conditions that have been called torture.

It is unclear to what degree Wikileaks’ revelations played a role in Trump’s win.

The U.S. media largely avoided the information Wikileaks exposed, and instead focused on allegations of a supposed Russian connection.

The fact is that Hillary had grown increasingly unpopular, failed to connect with many working Americans, and that voters had become increasingly anti-establishment and displeased with the extremely costly and tragic military actions she favored.

However, even if Wikileaks was a minor factor, there is no doubt that its exposés were unfavorable for the Clintons and the Democratic establishment. Therefore, it is interesting to see that even with Republican Donald Trump in office, the U.S. government continues to pursue Assange. Perhaps future leaks will clarify what or who is driving this.

Only Politico seems to have mentioned the Israeli connection–largely burying it.