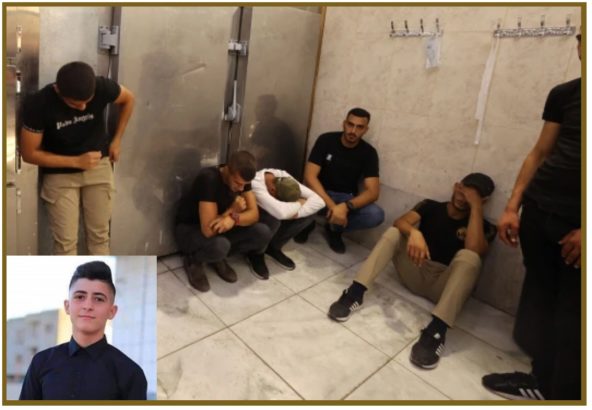 Friends and relatives mourn the death of Palestinian Odai Salah, 17, who was killed by Israeli forces during a raid near Jenin. (IAK)

In a 4-hour raid on a Palestinian village, Israeli soldiers shot teenager Odai Salah in the head with an expanding bullet, killing him, shot several others, stormed and ransacked homes, and threatened members of the Palestinian press.

Odai’s father stated, “The whole Palestinian people is like Odai. Killings have become daily, they happen in a monstrous way. We no longer have any dreams in this country.”

The Khalil Suleiman governmental hospital in Jenin said the soldiers killed Odai Trad Hisham Salah, 17, after shooting him with an expanding bullet in the head.

The soldiers also shot three Palestinian, including Ahmad Rashad, who suffered life-threatening wounds after the soldiers shot him in the back, and another who was moderately injured.

Furthermore, the soldiers attacked Palestinian journalists and threatened to shoot Palestine TV crew trying to enter the town to report on the ongoing invasion.

The soldiers also stormed many homes in the town and deployed their sharpshooter on their rooftops.

Dozens of Palestinians protested the invasion in several parts of the town, and hurled stones at the soldiers who fired many live rounds, rubber-coated steel bullets, gas bombs, and concussion grenades at the Palestinians and surrounding homes.

Palestine TV has reported that the Israeli attack and the intensity of the gas bombs and concussion grenades caused a fire in one home.

The town’s invasion lasted for at least four hours; the soldiers also closed and isolated the entire town and turned it into a closed military zone.

The invasion of Kafr Dan was carried out by a large military force before the soldiers stormed and ransacked the homes of Ahmad Ayman Ibrahim ‘Aabed, 23, and Abdul-Rahman Hani Sobhi ‘Aabed, 22, who were killed, Wednesday after exchanging fire with Israeli soldiers near Jenin, killing a commander of the Nahal Reconnaissance Battalion Maj. Bar Pelach, 30.

Eyewitnesses said the soldiers interrogated the families for several hours while ransacking their homes and abducted Amer Taha ‘Aabed, the cousin of Ahmad.

Israeli Combat Engineering Corps took measurements of the homes, a move that comes before the army detonates the properties in an act of illegal collective punishments.

Palestinian armed resistance groups in Jenin said the struggle for liberation and independence will continue despite the serious Israeli escalation and crimes against the Palestinian people, their homes and lands, and their holy sites.

Also at dawn, Israeli soldiers abducted four Palestinians from their homes in Hebron and Jenin after the soldiers stormed and ransacked many homes and buildings.

Salah’s father, Trad, told local media that his son “was like any other child at the start of his life” and said that Israeli forces had “killed him for no reason”.

“The whole Palestinian people is like Odai. Killings have become daily, they happen in a monstrous way,” said Trad. “We no longer have any dreams in this country.”

According to the Palestinian health ministry, the number of Palestinians killed by Israeli forces in the occupied territories since the start of the year now stands at 149, including 98 in the West Bank. More than 30 of those killed were either from Jenin or were killed in the Jenin region.

The figure also includes 51 Palestinians killed during a three-day Israeli assault on the besieged Gaza Strip in August, in which 17 children were killed.