You Are Here: Home → Palestinian From Jenin, 24, Dies From Serious Wounds Suffered Tuesday 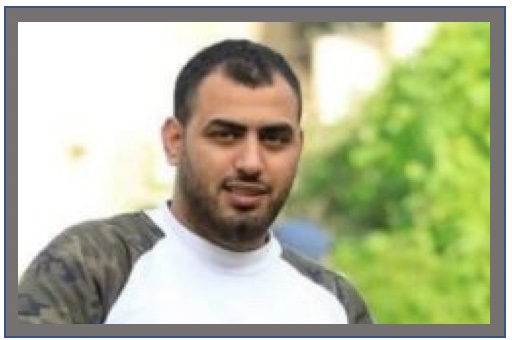 Another Palestinian has been killed by Israel’s shoot-first policy – the eighth so far this month. (And an additional Palestinian died in an Israeli prison from medical negligence). Hamad Abu Jilda leaves behind a pregnant wife and a child.

On Sunday dawn, the Khalil Suleiman governmental hospital in Jenin, in the northern part of the occupied West Bank, said a young man died at dawn from serious wounds he suffered Tuesday, September 6, in Jenin, after Israeli soldiers shot him.

He was receiving treatment in Jenin and had to undergo several surgeries due to the seriousness of his wounds; he remained in a coma at the Intensive Care Unit until he succumbed to his injuries.

After his death, hundreds of Palestinians marched in the streets of Jenin city, carrying his coffin and chanting for ongoing resistance and steadfastness until liberation and independence, in addition to denouncing the escalating Israeli violations against the Palestinian people.

It is worth mentioning that Abu Jilda was also a former political prisoner who was held by Israel for 2.5 years.

The slain Palestinian is a married father of one child named Hamad, and his wife is pregnant with the second child.

Hamad was named after his uncle, who was killed by the Israeli army in 1992 in Jenin.

On September 8, Haitham Hani Mubarak, 16, was shot and killed by Israeli soldiers near the main entrance of Beitin village, northeast of Ramallah, in the central West Bank.

On September 7, the soldiers killed Younis Ghassan Tayeh, 21, in the al-Far’a refugee camp, south of Tubas, in the northeastern part of the occupied West Bank.

On September 6, the soldiers killed Mohammad Mousa Saba’na, 29, and injured at least nine Palestinians in the northern West Bank city of Jenin.

On September 5, the soldiers invaded Jenin city and Qabatia town, in the northern part of the occupied West Bank, killed a young man, Taher Mohmmad Zakarna, 19, injured another, and abducted five.

On September 2, the soldiers killed Fadi Mohammad Fayez Ghattas, 19, after an alleged stabbing attack targeting soldiers, near Beit Einoun village junction, northeast of Hebron, in the southern part of the occupied West Bank.

On September 1, the soldiers killed Yazan Naim Affana, 24, after shooting him with live fire while the army withdrew from Um ash-Sharayet neighborhood in Al-Biereh city after the army invaded the Al-Biereh city in the Ramallah and Al-Biereh governorate, in the central part of the occupied West Bank.

On the same day, the soldiers killed Mahmoud Suleiman Khaled, 25, in front of the main entrance of Balata refugee camp, east of Nablus, in the northern part of the occupied West Bank.