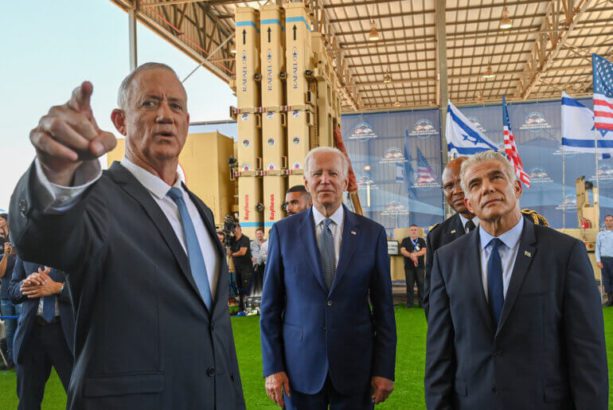 Yair Lapid’s brazen demand for impunity for the killing of Shireen Abu Akleh is a disturbing reflection of the US-Israeli relationship.

By Mitchell Plitnick, reposted from Mondoweiss

Despite the best efforts of the Israeli and American governments, the spirit of Shireen Abu Akleh simply won’t go away.

Shireen’s family won’t let her memory fade into the background in Washington or Tel Aviv as the memories of so many thousands of Palestinians have in the past. Neither will the broader Palestinian and Palestine-advocacy communities. But perhaps the most crucial group that is keeping Shireen’s spirit hovering over the politics of Israel’s policies, especially in Washington, are her fellow journalists.

Israel’s “report” on Shireen’s murder, as expected, admitted that one of its soldiers was responsible for her death, but duplicitously said that it was the result of an errant bullet during an exchange of fire with Palestinian “terrorists.”

That this is nonsense has been clearly established. The exchange of fire at the time of Shireen’s killing was blocks away. The Israeli military unit involved in the murder was the elite Duvdevan unit, a highly-trained bunch who do not fire wildly, but at targets, generally Palestinian people. The bullet which killed Shireen penetrated a small opening between her helmet and bullet-proof vest, with word “PRESS” clearly written in both the front and back. All of this is substantial proof of, at the very least, an intentional killing.

But in the wake of the report being published, we saw a very clear, and very disturbing, demonstration of where the Israeli government under Yair Lapid and the U.S. administration of Joe Biden stand, not only the issue of Shireen’s murder but of the entire relationship between Israel and its benefactor and protector in Washington.

Israel had long since made it clear that it would not prosecute the soldier who murdered Shireen Abu Akleh. In response, the State Department and Secretary of State Antony Blinken modified their very humble request, reducing it to a simple review of Israel’s rules of engagement when their soldiers entered a Palestinian area under their iron-fisted occupation.

But even this was too much to ask in Israel’s eyes. “I will not allow an IDF soldier that was protecting himself from terrorist fire to be prosecuted just to receive applause from abroad,” Lapid stated. “No one will dictate our rules of engagement to us, when we are the ones fighting for our lives. Our soldiers have the full backing of the government of Israel and the people of Israel.”

Lapid’s message had two intended audiences. The first was the Israeli public, which eagerly gobbles up any example of an Israeli leader defying what they see as the United States ordering them about [despite the fact that the U.S. gives Israel over $10 million per day, and expends another $10 million/day on items because they benefit Israel]. Most Israelis would draw the line at any action that might jeopardize the absolute and lock-step U.S. financial, military, and diplomatic support. But, to date, reactions from the Biden administration indicate Israel has not even approached such a line.

This is evidenced by the reaction of Lapid’s second audience, which is the Biden administration itself. State Department Spokesman Ned Price’s initial reaction to Israel’s initial report—an obvious whitewash that Israel, in its hubris, made no effort to disguise—made it clear that the U.S. was unwilling to press Israel about Shireen, but needed also to appease some in the Democratic Party who were unwilling to simply forget about her.

“We welcome Israel’s review of this tragic incident, and again underscore the importance of accountability in this case, such as policies and procedures to prevent similar incidents from occurring in the future,” Price said. And when Israel made it clear they would not do this, Price’s understudy, Deputy Spokesperson Vedant Patel, repeated an embarrassing mantra: “To reiterate, we continue to underscore the importance of accountability in this case, and we’re going to continue to impress our Israeli partners to closely review its policies and practices on the rules of engagement, and consider additional steps that will mitigate risk in this circumstance.”

One could almost feel sorry for Patel, being hung out to dry in front of experienced foreign policy reporters with nothing but this tissue-thin line to offer. Under a series of questions from journalists, he could do nothing but continue to repeat himself, despite the fact that what he was describing was not only the opposite of accountability, but was the United States government once again choosing to shirk its responsibility to protect its citizens from a foreign government that has killed them with impunity.

That was what Patel had to defend. Shireen Abu Akleh was only the latest American citizen to be killed by Israel. Nearly twenty years ago, it was activist Rachel Corrie, crushed under a U.S.-made and supplied, but Israeli-modified Caterpillar armored bulldozer. Twelve years ago, it was 18-year old Furkan Dogan, killed by Israeli commandos on the Mavi Marmara as it tried to bring food and supplied to people being starved by Israel’s blockade of Gaza. Six year ago, Mahmoud Shaalan was gunned down while his hands were in the air at an Israeli checkpoint in the West Bank. Earlier this very year, Israeli forces ripped 78-year old Omar Assad from his car, abused him, handcuffed and blindfolded him, causing such stress he died of a heart attack. [And 55 years ago Israeli forces killed 34 American servicemen.]

Israel has never been held accountable, nor held anyone accountable, for the deaths of these American citizens. Lapid’s words made it clear they would not stand for anything less than total impunity regarding these murders.

Former Prime Minister Naftali Bennett clarified Israel’s stance. “At any given moment,” Bennett tweeted on Tuesday, “there are Palestinian terrorists trying to murder Israelis. Not the other way round. We are not trigger-happy, but our moral duty is to hit terrorists and thereby save lives.” The army, Bennett stated must be “detached from any pressure, internal or external.”

Sifting through the blatant racism and dishonesty of Bennett’s characterization of Israeli military innocence and Palestinian bloodthirstiness, he is plainly stating that an Israeli soldier can shoot any Palestinian any time she or he wishes, and the very nature of their respective identities as Israeli soldier and Palestinian “terrorist” places the Israelis above reproach. And above any kind of law.

Lapid’s message got through to both the Israeli public and the Biden administration. But how well is that message playing more broadly in the United States?

Democratic hawks like Senate Foreign Relations Chair Bob Menendez—who was in Israel earlier this week—have been remarkably quiet about Shireen lately, but even Menendez, earlier this year, expressed concern over her killing and called for a credible investigation of her death. The silence of pro-Israel Democrats is indicative of the difficult position Israel has put them in, and it has left a vacuum which is amplifying the more critical Democratic voices.

Outgoing Rep. Marie Newman, for example, tweeted, “The @StateDept’s response to Israel’s statement refusing to prosecute the soldiers responsible for killing Palestinian American Shireen Abu Akleh is woefully inadequate. I expect nothing short of a US investigation that leads to accountability. It’s the least we can do.”

Rep. Andre Carson (D-IN), who earlier this year introduced the “Justice for Shireen Act,” said the Israeli report fails to “address the key questions around Shireen Abu Akleh’s death and falls short of what we expect when a U.S. citizen is killed on foreign soil.”

Rep. Raul Grijalva, said that Secretary of State Antony Blinken “has a responsibility to hold Israel accountable and demand justice for [Abu Akleh’s] death,” and that “the silence is damning and deafening. We need justice for Shireen.”

Perhaps most important was the statement of Senator Chris Van Hollen (D-MD), who, while at the progressive end of the Democratic Party is still closer to the center than the Representatives who spoke out and is up for re-election this November (albeit in a race that he is universally seen as safe for him). Van Hollen tweeted, “The crux of the “defense” in this IDF report is that a soldier was “returning fire” from militants. But investigations @NYTimes @AP @CNN @washingtonpost & @UN found no such firing at the time. This underscores need for independent US inquiry into this American journalist’s death.”

There is no factual argument that can refute what these Members of Congress have said, which is why Israel’s supporters on Capitol Hill are trying to avoid engaging with them. Indeed, if anything is to be critiqued it is the call for an impartial U.S. investigation. As unlikely as the investigation is, impartiality should it come about is even harder to imagine.

It is crucial, however, that these calls be supported. Shireen’s murder must remain on the agenda past the November elections. Until then, even the hardiest Democrats are going to tone down criticism of their President and Secretary of State.

But in two months, that pressure will be lifted. And the Biden administration must be taken to task for its behavior here. As hypocritical as it was for Biden to fist-bump Saudi Crown Prince Mohammed Bin Salman, it’s important to recall that, as important a figure as Jamal Khashoggi was, he was a U.S. resident, not a citizen.

Shireen Abu Akleh, like Rachel Corrie, Furkan Dogan, Mahmoud Shaalan, and Omar Assad before her, was an American citizen. Foreign countries are not supposed to be allowed to murder American citizens with impunity, especially when they are killed for doing their jobs as reporters.

But Yair Lapid brazenly stated that Israel must be allowed to do just that. President Joe Biden and Secretary of State Antony Blinken supported Lapid in that statement, in effect. That’s something that Shireen’s fellow citizens can’t allow.

Mitchell Plitnick is the president of ReThinking Foreign Policy. He is the co-author, with Marc Lamont Hill, of Except for Palestine: The Limits of Progressive Politics. Mitchell’s previous positions include vice president at the Foundation for Middle East Peace, Director of the US Office of B’Tselem, and Co-Director of Jewish Voice for Peace.

Timeline of Israelis and Palestinians killed since 2000