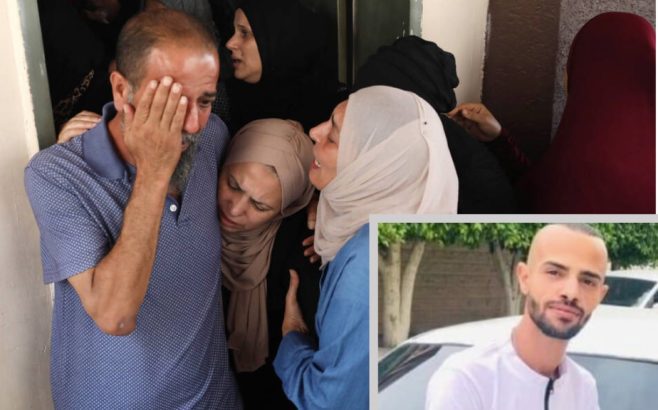 Mohammad Mousa Mohammad Saba’na died Tuesday after being shot in the chest while filming an Israeli invasion in Jenin.

As Palestinians in Jenin protested Israel’s illegal demolition of a Palestinian home, Israeli forces opened fire on the protesters, killing Mohammad Saba’na and injuring others. Saba’na, 29, was holding his smartphone and documenting the Israeli invasion when soldiers shot him in the chest and other parts of his body. This is the sixth Palestinian in a week to die at Israeli hands…

On Tuesday dawn, dozens of Israeli soldiers invaded the eastern neighborhood of Jenin city, in the northern part of the occupied West Bank, killing one Palestinian and injuring at least nine, two seriously. (PCHR, the Palestinian Center for Human Rights, reports, “One Palestinian was killed, and 17 others, including 6 children, a woman, and a paramedic were injured”).

Medical sources said the soldiers killed Mohammad Mousa Mohammad Saba’na, 29, after shooting him with live rounds in the chest and other parts of his body.

The Palestinian was holding his smartphone and documenting the Israeli invasion before the soldiers targeted him with a barrage of live rounds.

Medical sources have confirmed that five of the seven Palestinians were shot with live fire to the upper parts of their bodies.

The Palestinian Red Crescent Society (PRCS) said many more Palestinians were injured, all shot with live fire and likely received treatment by medics from local hospitals and medical centers, and those rushed to medical centers by civilian cars.

The invasion was carried out by more than 100 armored military vehicles, including bulldozers, from several directions after surrounding and isolating Jenin and the Jenin refugee camp.

The soldiers also stormed, ransacked many homes and buildings, and used their rooftops as firing posts for their snipers.

In addition, the soldiers invaded an apartment building in the Eastern Neighborhood and forced the families, including many children, out of their homes.