You Are Here: Home → Ultra-Orthodox men assault woman for sitting at front of Jerusalem bus 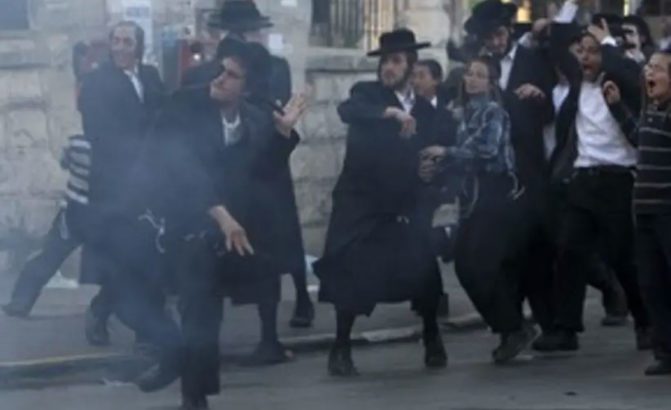 US media rarely report on the Jewish extremism in Israel that plays a significant role in the country. For example, when a woman recently refused to move to the back of the bus, a group of 20 ultra orthodox men began verbally berating her; when she still refused to leave her seat they began physically assaulting her and prevented her from calling the police

A group of ultra-Orthodox extremists verbally and physically assaulted on Sunday a woman for sitting at the front of a public bus in Jerusalem, in an attempt to enforce a modesty code embraced by some members of the Haredi community.

The victim, speaking on condition of anonymity, told the Ynet news site that she was targeted while riding a bus on route 577 between Jerusalem and the ultra-Orthodox city of Elad operated by the Kavim company.

“On the way home, a group of 20 guys got on the bus, and decided that it didn’t suit them that I was sitting in the front,” she told the news site, explaining that during the trip she suffered from “nausea and vomiting, and sitting in the back was not good for me, to say the least.”

When she declined to move, the men began verbally berating her, using a pejorative term for a gentile woman, and when she still refused to leave her seat began physically assaulting her.

“They pulled my hair from behind. At first, I thought I was imagining things, until I felt strong pulls. A guy who was sitting in a parallel seat in the second row…decided to take off his shoe and put his smelly sock next to me, in hope that this would make me move,” the woman said.

When she attempted to call the police to report the abuse, the extremists attempted to stop her, she said. “I have been riding the bus from Elad to Jerusalem and vice versa for the past two years, and I have experienced many cases of verbal violence on religious grounds.”

In a statement, Kavim told Ynet that it “gravely views the behavior of the passengers, and is sorry for the anguish caused to female passengers,” adding that the driver had intervened to try to stop the harassment and that the company “will cooperate with the Israel Police to prevent similar cases.”

Although less prevalent than in previous years, such incidents are not uncommon, especially in ultra-Orthodox neighborhoods.

Last month, a 13-year-old girl said she was barred from boarding a bus in northern Israel because of how she was dressed, in violation of transportation regulations.

In 2020 a court awarded a woman 150,000 shekels ($44,000) in damages after a bus driver refused to let her board at a bus stop in a religious West Bank settlement because she was wearing shorts.

In 2013, two buses were stoned by a group of Haredim in the city of Beit Shemesh after the police arrested a man and woman who had asked a female passenger to move to the back of the bus. This incident occurred on a mehadrin bus line, on which men and women are expected to sit separately, but a ruling by the High Court of Justice in 2011 determined that such seating is strictly voluntary and that forced gender segregation on buses is illegal.

The ruling came after a 2007 petition by a group of women and the Reform Movement’s Israel Religious Action Center against dozens of bus lines serving the ultra-Orthodox community. On these routes, women were required to use the back door and sit in the back of the bus, while men entered through the front door and sat in the front.

For more information on the assault go here.