You Are Here: Home → Israeli Racism – Legalized and Running Rampant 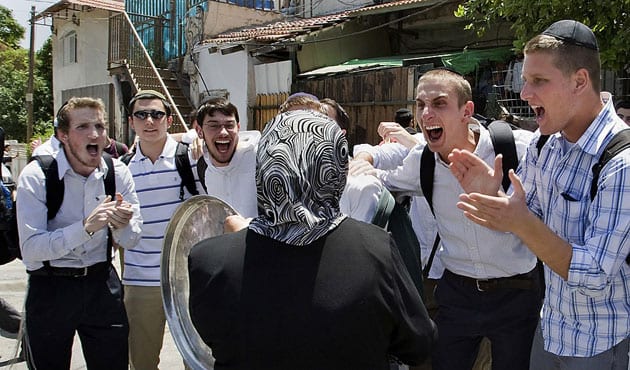 What might it look like to be a minority in an apartheid state that has spelled out your second-class status, sanctioned discrimination against you, and not-so-secretly wants to get rid of you? Here’s how that looks in Israel.

Israel’s new Nation State Law, just over 1 month old, has already increased the discrimination against Palestinians in Israel to absurd levels: they’re being prohibited from raising chickens, planting potatoes, gathering traditional herbs. Small sewing and knitting factories are being closed down and moved to Jordan. The only logical explanation: it’s part of a plan to make survival in Israel impossible, to initiate a “soft transfer” or “voluntary emigration” of Palestinians, because mass deportation – as in the Nakba – is no longer practical.

Israel is increasing its economic, political, and security siege on the 1.6 million Palestinians of 1948 – the Palestinians who make up 21% of Israel’s population. Its discriminatory policies have reached a level in which Palestinians are prevented from raising chickens and planting potatoes, small textile factories have been closed and transported to Jordan, and other products and ways of life have been impacted as well.

This is a racist phenomenon with the deliberate goal of “soft transfer” or “voluntary emigration” of Palestinians, because mass deportation – as in the Nakba – is no longer practical.

Help Wanted – with a catch

But before we get into the details, it must be noted that every job in Israel, whether governmental or non-governmental, has as a condition that the applicant has served in the occupation army, which clearly prevents the Arabs of 1948 from entering the labor force. This explains why Arabs undisputedly have the highest level of unemployment, and why 50% of Palestinian children at home live below the poverty line.

In addition to that, on the facades of many, many shops from the far north to the far south of the Jewish State, Help Wanted signs are posted for salespeople. In Eilat (Umm al-Rashrash), this writer saw a help wanted sign in an underwear shop with a requirement that the candidate has served in the occupation army.

What is the relationship of the army to underwear? Perhaps the answer can be found in the many advertisements by Jewish call girls. They say clearly what others hint at: “We do not welcome Arabs!” Of course there are clear obscene messages in public places, like “Arabjarrab” (Arabs are lepers) and other filthy insults and curses.

In the context of the economic persecution of Palestinians, the Israeli Ministry of Agriculture lately decided to prohibit the 1948 Arabs from raising chickens. As a result, they prevented them from obtaining eggs, asserting that this product should come only from Jews in the moshavim (cooperative villages) . Within days, Arab eggs disappeared from the markets and were replaced by Israeli eggs, which came from moshavim built on the ruins of Palestinians villages destroyed since the Nakba.

Israeli authorities also issued a law forbidding Arabs to plant potatoes, thanks to pressure from Israel’s large potato farmers – after authorities discovered that potato cultivation is inexpensive and that potatoes are a valuable source of income for Palestinians. The eggs and potatoes are examples of the institutional racism in the Jewish state.

It is well known that Palestine is a fertile agricultural land, rich in many types of plants that grow in the wild. Some of these, such as thyme and hibiscus, are harvested and used by Palestinians for food, but not known or eaten by Jews.

The Israeli government has recently instructed the so-called “Nature Protection Authority” to declare that these plants are on a list of “protected” plants, and that those who harvest them are breaking the law.

At the same time, many Jewish merchants who discovered the importance of these plants for Palestinians have applied to the Israeli Ministry of Agriculture for the necessary permits to grow these plants and then sell them in Arab markets. Thus, the Palestinian has become a profitable market for Israeli trade for a product that used to be available for free.

Tobacco and textiles are out

In this context, the occupation authorities found another outlet to narrow the economic space to the Palestinians, with the Dubek, the only Israeli cigarette producer, stopped purchasing tobacco from Arab farmers. Keep in mind that tobacco is one of the main cash crops for Palestinians in the Galilee (West Bank), within the so-called “Green Line.” Thus, Israel has eliminated the market for one of the most important Arab agricultural products in Palestine. Instead of Arab tobacco, Israel has turned to its ally Turkey, and is importing Turkish tobacco.

To make things even worse in the economic war against the Palestinians – and in cooperation with Jordan – Israel recently closed a number of small sewing and knitting factories in the Galilee, the Triangle (a cluster of Israeli Arab villages near the Green Line), and the Negev areas. These factories, the source of income for a large number of Palestinian families, are now being moved to Jordan with the excuse of cheap labor. It is rumored that this is an attempt to support Jordan’s fragile economy, but clearly  the occupation wants to cut off income sources of the 1948 Arabs.

And on and on

It is worth mentioning that Israel’s economically strangling policies to date have led to a 33% unemployment rate in the Negev and Umm al-Fahm, and widened the employment gap between Palestinians and Israelis: unemployment among Palestinians reached 25%, vs. 6.5% among Israelis.

To illustrate the depth of Israeli racism, it is enough to point to the humiliation the 1948 Arabs face during Israeli airport searches and unnecessary, inciting investigations. In addition, the Israeli Prime Minister’s Office does not employ even one Arab; homes are demolished; towns and villages are not allowed to expand and build. Finally, Israeli trains do not pass through any Arab cities or towns inside Palestinian land.