You Are Here: Home → NY State Senator Jeff Klein, you have some ‘splaining to do

NY State Senator Jeff Klein, you have some ‘splaining to do 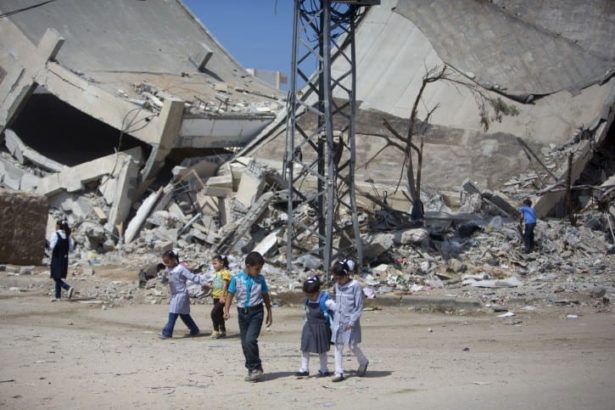 Palestinian school children walk past a destroyed building during the first day of school in Gaza City, Sept. 14, 2014. Some half million Gaza children made a delayed return to school on Sunday after a devastating 50-day Israeli invasion that killed more than 2,100 Palestinians and damaged hundreds of schools. (AP Photo/Khalil Hamra)

NY State Senator Jeff Klein seems torn between two viewpoints: one says “all people are created equal, with certain unalienable rights – life, liberty, and the pursuit of happiness.” The other, incompatible with the first:  “Israel, right or wrong.”

On Thursday, September 13, incumbent New York State Senator Jeff Klein faces challenger Alessandra Biaggi in a primary election to determine who will be the Democratic candidate for the 34th senate district in the general election this November. Senator Klein has been serving in the Senate since 2004, and before that spent 10 years in the NY State Assembly.

Thank you, Senator Klein, for your service. However, you may have some policy inconsistencies – and the record needs to be set straight. Where do you stand, sir?

For example, you said, “I am most proud of the work I have done on behalf of the Jewish Community. These efforts include passing legislation that targets the BDS movement, ensuring that anti-Semitic attacks are penalized to the fullest extent of the law.”

Specifically, your 2013 anti-BDS legislation targeted the American Studies Association’s (ASA) academic boycott of Israeli universities. You wanted state funding to be pulled from universities that boycott Israel. (Interestingly, you never question why these institutions choose to boycott – why is that? – you automatically assume the action to be hostile.) In your words, “I will not allow the enemies of Israel or the Jewish people to gain an inch in New York. The First Amendment protects every organization’s right to speak, but it never requires taxpayers to foot the bill.”

In actuality, the ASA is not an enemy of Israel or Jews; rather, its boycott was in solidarity with the Palestinian people due to, as ASA explained:

Israel’s violation of international law and UN resolutions; the documented impact of the Israeli occupation on Palestinian scholars and students; [and] the extent to which Israeli institutions of higher education are a party to state policies that violate human rights.

Senator Klein, you don’t support the violation of international law and UN resolutions, do you?

You champion education in New York – are you in favor of Palestinian students and teachers being unable to work because of the Israeli occupation with its long delays at checkpoints, shortage of electricity, and the demolition or invasion of classrooms?

More to the point, do you want to withhold state funding from groups that protest such human rights violations? And, do you find something anti-Semitic about such protests?

A mission of peace?

Senator, another thing you said you were proud of was your participation in “a delegation from New York State…on a peace mission to Israel.” You elaborated, “the State of Israel is not only personally sacred to me but a beacon for the values and rights inherent in a Democracy which I hold dear.”

It is interesting that your “peace mission” took place in August 2014, during Israel’s most lethal incursion against Gaza: Operation Protective Edge, in which 2,220 Palestinians and 73 Israelis were killed.

The disproportionate nature of Israel’s attacks alone probably amounted to war crimes. Add to that the killing of journalists, close to 100,000 homes damaged or destroyed, deaths of civilians – sometimes dozens at a time – and it sounds like you should have been calling for a boycott, not standing in solidarity with Israel.

What “values” are inherent in that “Democracy,” Senator? Particularly now, 4 years later, when the carnage is again adding up at the Gaza border. Unarmed protesters have been shot by snipers. Exploding bullets are causing unspeakable damage and amputation of limbs. Hundreds have been shot in the head.

Do you want to stand with such violence, or speak up against it? Your gun regulation policy in New York, the “SAFE Act,” indicates that you are not a fan of assault weapons. Does that also apply to Palestinians?

Liberty and justice for all?

And finally, Senator, you said, “I have spoken to thousands of constituents this summer on the campaign trail and they all speak to the same things. They want a safe community…They want quality education for their children. They want to be able to retire with dignity.”

As you throw your support, seemingly without hesitation, behind Israel, remember this: all people – people who are not your constituents, but who are people just the same – want the same thing New Yorkers want: a safe community, an education, dignity. Hope. Justice. Freedom.

If you believe that some people don’t deserve those things because of the nationality they claim, or their ethnicity, or the faith they practice, or the political party they support, or because their protests and slingshots make you uncomfortable – then maybe it’s time for some deep soul-searching. Can you wish life, liberty, and the pursuit of happiness for Palestinians?

Senator, the Jewish Vote has endorsed your opponent, Alessandra Biaggi. In fact, they’re having an event for her on September 9th:

“Start the Jewish New Year off right, and get in a couple hours of voter outreach, ensuring Riverdale residents get to the polls and elect a real progressive in a real important election!”

Jewish Vote Executive Director Audrey Sasson believes, “We have to do everything we can to stand up for free speech and oppose criminalization of political dissent.”

In fact, Senator Klein, this country was built on political dissent and free speech.

The most vulnerable among us, both in the US and around the world, are the ones whose voices most need to be heard – and the tide is turning in their direction. If you continue to shut them down, if you turn a blind eye to their pain, your services may no longer be needed.