You Are Here: Home → Army Injures Dozens Of Schoolchildren In Deir Nitham 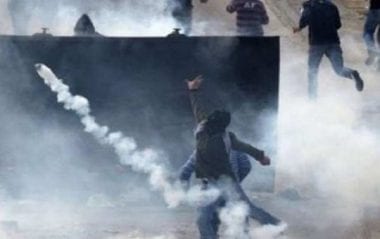 Tear gas is a chemical weapon that causes severe eye, respiratory, and skin irritation, pain, bleeding, and can even cause blindness.

Medical sources said at least 280 children were in school, when the soldiers fired the gas bombs at it.

The army surrounded the school and several nearby neighborhoods, and were trying to prevent the Palestinian from marching in their own town.

It is worth mentioning that the soldiers have been frequently invading the village, and breaking into homes, especially at dawn, and abducted many Palestinians, including children.

Furthermore, the soldiers abducted two Palestinian children from Betunia town, west Ramallah, and caused many schoolchildren to suffer the effects of teargas inhalation.

In addition, the soldiers attacked dozens of Palestinian worshipers in the Al-Aqsa Mosque, in occupied Jerusalem, and abducted a young man.

The soldiers were accompanying a group of colonist settlers who conducted provocative tours in the holy site, and were using loud speakers.