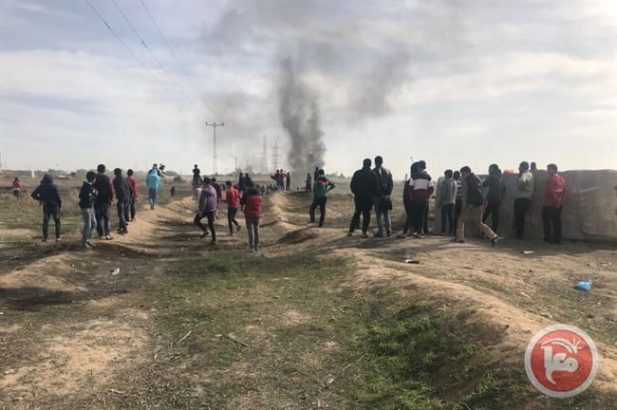 GAZA CITY (Ma’an) — Israeli forces have shot and killed two Palestinian protesters in the Gaza Strip during clashes along the border fence with Israel, according to the Palestinian Ministry of Health.

[Such “clashes” are between unarmed Palestinians on their own land and Israeli military occupation forces armed with highly lethal weaponry, body armor, etc]

The first Palestinian was identified as 24-year-old Zakariya al-Kafarne, who was killed after being shot with live ammunition by Israeli forces during clashes in eastern Jabaliya in the northern Gaza Strip.

A second Palestinian protestor was also pronounced dead, though their identity remained unknown.

Protesters had marched following Friday prayers and protested near the border fence in response to calls from Palestinian factions for a third “Friday of Rage” in protest of US President Donald Trump’s announcement earlier this month recognizing Jerusalem as the capital of Israel.

The two slain Palestinians on Friday brings the death toll of Palestinians killed by Israel since Trump’s announcement to 12 — eight killed in clashes, and four killed in airstrikes.

For a list of Palestinians and Israelis killed since 2000, with details of each death, go to Israel-Palestine Timeline. (The most recent deaths are not yet added.)