You Are Here: Home → Joy to the world: Jesus is a celebrated prophet in Islam, too, peace be upon him

Joy to the world: Jesus is a celebrated prophet in Islam, too, peace be upon him 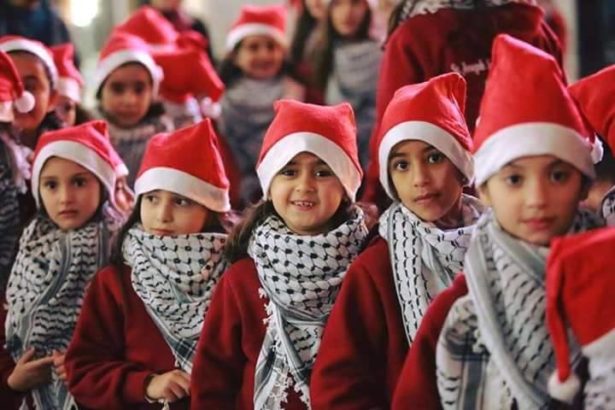 In the interest of peace, Safdar Khwaja from CAIR reminds us that Muslims revere Jesus highly, and believe in the divine origin of the holy books of all three Abrahamic religions. She reminds us of the need to work together, for there is much to be done in our broken world.

At the end of the article, If Americans Knew offers you some photos of Christmastime in Bethlehem, where there is genuine interfaith peace.

The Christmas season brings lights, cheer and charity across America and prayerful celebration of the Christian savior’s birth in churches across the world. Greeting cards proclaim “Joy to the World,” though people might wonder just how to spread joy.

Christian Americans also might wonder how non-Christians perceive the festive Christmas season — particularly Muslims, given all the controversy about them that’s been stirred up in recent election cycles.

It may come as a surprise to many people that Muhammad, peace be upon him (pbuh), recognized Jesus (pbuh) as the promised final leader for mankind. As recorded in multiple Hadith (sayings of the Prophet) ( Bukhari, Vol. 3, Book 34, No. 425 et seq.), “… Jesus (pbuh) son of Mary, will descend amongst you as a just ruler, kill the anti-christ, and abolish unfavorable practices. Money will become in abundance so that no one will accept it as charity.”

This significant Hadith is neither unique nor an isolated forecast in Islam. As the youngest of the three major Abrahamic faiths, Islam recognizes all of the revelations and commandments of a singular God (Eloh in Hebrew, Alah in Aramaic, Ilah in Arabic, Allah as “the-God” in Arabic), as a continuum of God’s messages. The Scrolls (Abraham, pbuh), Torah (Moses, pbuh), Psalms (David, pbuh), Gospels (Jesus, pbuh), and Quran (Muhammad, pbuh), are all recognized as of divine origin and included in the faith of Islam.

Followers of these divine revelations are recognized as “People of the Book,” with marriages allowed among them, which has led “mixed” families over the centuries to develop close relationships.

Jesus is mentioned 25 times in the Quran in many contexts, including as a messenger of God, as the Messiah, as the “word” and “sign” of God, as endowed with healing miracles, as ascending into heaven, as promising to return.

The Quran mentions the virgin birth of Jesus many times. He is the only prophet who is mentioned along with his mother. The Quran’s chapter 19 is dedicated to Mary (Maryam), who holds a singularly exalted place in Islam, being the only woman named in the Quran. She is referred to 70 times in multiple chapters, and she explicitly is identified as the greatest of all women.

To Muslims in America, celebration of the life of Jesus and acts of charity during the Christmas season are very similar to their own traditions. The two major Muslim celebrations, or Eids, feature charity, prayers and festivities. They occur following the month of fasting (Ramadan) and at the commemoration of Abraham’s (pbuh) commitment to personal sacrifice. Celebrations such as Christmas and Eid are meant to renew the foundations of our beliefs.

Sadly, we see anxiety and suspicion between Christians and Muslims, which are politically inspired and cause us to overlook our shared heritage. If we were true to the teachings of our faiths, we would see that the values we collectively cherish are rooted in a common history. Such a realization could become the basis for cooperation, for friendship, for truly spreading “Joy to the World.”

Humanity has massive challenges to overcome; disease, poverty, hunger, ignorance, war, the list goes on. These challenges require a new paradigm of collaboration among people of all faiths, or no faith, from the local to the global level.

Interfaith dialogue is growing here in Pittsburgh, but participation remains sparse. In our “home of the brave,” we need more brave souls who are willing to listen to the narratives of people who are very different from themselves.

Here is my wish for this holy, festive season:

May our leaders be brave. May they employ their energies and talents toward bringing us together rather than driving us apart. May they help us solve the intractable problems we face by harnessing our common values and humanity. May this spirit of cooperation bring us joy.

Safdar Khwaja is president of the Pittsburgh chapter of the Council on American Islamic Relations, the largest Muslim civil rights and advocacy organization in the United States.